Kara Cochrane, my heroine in Her Kind of Man, loves clothes.  The first time she visited Little Knoll Farm, the home of my hero Ross Williams, she wore her new suede pants and boots.  How do you like them? 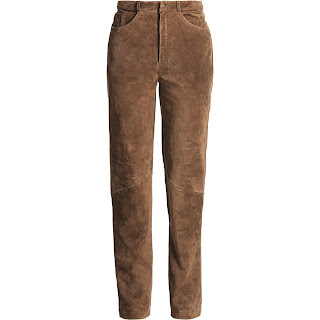 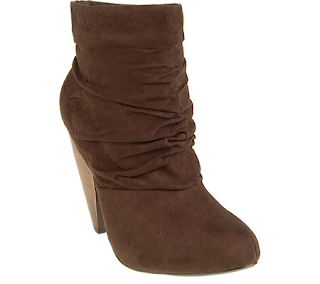 The boots are from Chinese Laundry and cost $69.95 at http://www.shoebuy.com/chinese-laundry-wiz/431678/918864  The pants are from Sierra Trading Post and cost $89.95 at http://www.sierratradingpost.com/scully-washable-suede-pants-tapered-leg-for-women~p~4574g/?CAWELAID=1286998548&afsrc=1&gclid=CIvFgKqjva8CFY1R7AodtiTYxQ&codes-processed=true
The pants are washable which is good because of something that happened to Kara while she was at the farm.  Here’s an excerpt for you.
Little Knoll Farm didn’t impress Kara one bit. The barns lay a good distance from the house, but when she got out of the SUV, manure, hay, and other farm smells she couldn’t—and probably didn’t want to—identify assaulted her senses. One of the smells was probably the chicken poop scattered around the yard. She’d worn her nice suede boots, the ones with the high heels, so of course she’d already stepped in a nasty pile of chicken poop the minute she got out of the SUV.
“Don’t the chickens have a house?” she asked Ross as a red hen squawked and dashed in front of them.
“Yeah, they have a coop to roost in, but during the day they have the run of the place.”
“Do you eat them?” She hoped so. It would serve them right for messing up her boots.
“Sometimes, but we keep them for the eggs. Mom likes fresh eggs better.”
Ross’s home, a small, low-slung, white frame house with an open porch extending off one side, also disappointed Kara. It did not resemble the country living homes featured in magazines, but it did look well-tended which was about the only thing the house had going for it.
Kara schooled her face to hide her distaste as they walked through the front door directly into the living room where fake, brown paneling sucked the light out of the room and reminded Kara of pictures she’d seen in her mother’s old magazines, the ones from the seventies. The thrift store reject sectional and recliners did nothing to improve her impression of the room. It was clean, though, and that was a plus.
She liked the fireplace on the far wall too. It was flanked by two windows and looked as if it would be a nice place to warm yourself on a cold winter’s day. Ross closed the door behind them. “Everybody must be in the kitchen.”
She liked the kitchen better. The white cabinets and sunny yellow walls made the kitchen cheerful and pleasant.
The kitchen table was set for lunch. Glasses filled with melting ice told her that they’d waited lunch on her and Ross. Ross smiled at Kara. “Mom, this is Kara Cochrane. Kara, my mom, Annie Williams.”
“Hello, Kara, it’s nice to meet you.”
“It’s nice to meet you too, Mrs. Williams. Thank you for inviting me to lunch.”
“This is my brother Bobby, his wife Sue, and their son Justin,” Ross continued.
Justin responded by staggering against Kara’s new suede pants with sticky, chocolate covered hands.
“Justin!” Sue snatched him away a second too late. “Let me get you a towel, Kara.”
Sue ran over to one of the cabinets and grabbed a clean dish towel which she wet and handed to Kara. Kara swiped at the handprints, but of course they didn’t come off.
“I’m so sorry,” Sue apologized.
Sue looked sorry. She had a worried look on her face which bothered Kara. “Please don’t worry about it. They can be cleaned.”

Maybe not too great a beginning, huh?  Her Kind of Man is on sale for 25% off at http://www.lachesispublishing.com/proddetail.asp?prod=HerKindofMan  Use the code Her-Kind-of-Man-25-percent-discount
Posted by Elaine Cantrell at 12:00 AM