Nothing like a good kiss, right?  In this excerpt, my hero Ross shares a kiss with Kara my heroine.
Her Kind of Man is available for 25% off at http://www.lachesispublishing.com/proddetail.asp?prod=HerKindofMan  It's in print or ebook.  Use the code Her-Kind-of-Man-25-percent-discount  You can also get the book at Amazon and most other major retail outlets. 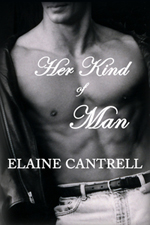 “I need to get home too,” Ross said as he stood up. “I’ve got a lot to do.” He took Kara’s hand and pulled her into his arms. “I could use a goodbye kiss.”


Kara didn’t know if she wanted to kiss him or not. She liked kissing Ross, but they had only gone out a couple of times.


The sound of Kelly’s voice at the top of the stairs decided the issue. Kara closed her eyes and tilted her head as his lips met hers. She forgot Kelly, the wedding dress, and her mother. In fact, she almost forgot her own name. Something about Ross made her want to hold him and never let him go. She couldn’t think straight when he held her this way.


Head spinning, Kara gasped and pulled away from him. She pushed her tousled hair back from her face and whispered, “Stop, Ross. Mama may come in.”


Ross laughed softly. “Why do you care if she sees you kiss me?”


Kara’s eyes widened as she took a step backward. “I don’t make a habit of kissing my dates in front of my mother, Ross.” To her surprise Ross smiled. “What’s so funny?”


Kara knew he was right. Oh, why did everything have to be so confusing? When she and Brandon were engaged, nothing embarrassing or stressful ever happened to her!


Ross didn’t ask for a kiss this time; he took it. He had her back in his arms before she knew it. She couldn’t have spoken even if she hadn’t been kissing him. Ross didn’t feel like Brandon. He didn’t kiss like Brandon. The warm fuzzies she experienced with Brandon felt nothing like this. This kiss was thrilling, scary, heart pounding, and sizzling hot. Yes, Ross made her hot for him. His kisses and touch drove all but one thought from her mind, and she didn’t have to say what that was.


The kitchen door slammed in the background and broke the spell. She jumped and twisted in Ross’s arms.


That was so not fair! Ross should be the one losing his senses, not her. She pulled away from him again, this time making sure she succeeded in putting some distance between them.


“Thank you for dinner. I enjoyed it very much.” Drat! Why did her voice sound so prim and proper?


Ross gave her a wicked little grin that told her he knew exactly how he’d made her feel.
Posted by Elaine Cantrell at 7:00 AM