A Kiss To Die For 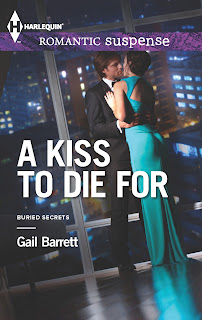 A Kiss to Die For


Homeless Army veteran Sullivan Turner is nobody’s hero.  His failure to save his fallen comrades proved that.  So when a gutsy social worker gets caught in a drug gang’s crosshairs, he knows he’s the last man who can safeguard her and the pregnant teenagers she’s trying to protect.

Former debutant Haley Barnes learned the hard way how to survive.  After witnessing a cold-blooded murder, the terrified teenaged runaway changed her identity and hid to save her life.  But when the killer tracks her down and attacks the girls in the homeless shelter she now runs, Haley knows the time has come to stand and fight.  But to bring down the powerful killer she must confront her high-society family’s darkest secrets -- and convince wounded warrior Sully Turner he’s the hero she believes.

“I can get a cop to go with you.  I know a few who moonlight as bodyguards.”

Sully shot him a look of disbelief.  “You can’t be serious.  She needs to hide, not appear in public, risking her life.”

But Haley broke in.  “It doesn’t matter.  I can’t use the police.  The killer could recognize a cop.  I need someone less obvious.  Someone I can pass off as my date.”  Her gaze returned to his.

Realization sank in.  He took a quick step back.  “Forget it.”

“Why not?  You obviously know how to shoot.  And you’re in this as much as I am.  That gang’s after you now, too.”

He didn’t care about himself.  He should have died months ago.  But Haley needed protection -- protection he couldn’t provide.

“I can’t.”  He had a bum leg.  He suffered from chronic flashbacks.  Hell, he was so messed up he could barely function without a drink, let alone safeguard her.  And his intuition was off.  The last time he’d relied on his instincts, he’d screwed up -- and his men had paid the price.

“He’s right,” the cop told her.  “No offense to Sully, but you need a pro, someone who can keep his eye out for trouble in a place like that.”

Someone who could stay sober, he meant.

Sully worked his jaw, suspecting his bloodshot eyes had given him away -- or the way he’d guzzled the beer Parker had offered him when they’d first arrived.  But even if it humiliated him to admit it, Parker was right.  Haley didn’t need a broken man like him.


Gail Barrett is the award-winning author of thirteen romantic suspense novels.  A former RITA® and Daphne finalist, Gail has received the Book Buyer’s Best Award, the Holt Medallion, the Booksellers Best, The National Readers’ Choice Award, and numerous other awards.  She lives with her husband in Western Maryland.  For more information, visit her website: www.gailbarrett.com.

Gail will be awarding a $25 Amazon gift certificate and either a signed print copy (US ONLY) or an electronic copy of Fatal Exposure (Buried Secrets book one) to one randomly drawn commenter during this tour and her other Super Book Blast on August 27th.

For a better chance to win, follow her tour and comment often.  Find her schedule here: http://goddessfishpromotions.blogspot.com/2013/07/virtual-super-book-blast-kiss-to-die.html
Posted by Elaine Cantrell at 12:00 AM

Thanks for hosting me today! It is a pleasure to be here.