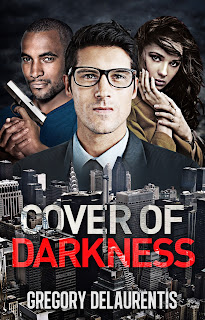 Readers, please help me welcome Gregory Delaurentis to the blog.  Gregory is guest blogging on his Muse.  Gregory, thank you so much for stopping by.﻿
PONDERING THE MUSE

Everyone sees the Muse differently, which I expect causes them to react to her differently. I see the Muse somewhat as a Siren, singing on the rocks. But instead of being lured to one’s death, the Muse aids a writer in forming ideas. In a writer’s spurt of creation, there are lots of starts and stops along the way. I call them ‘mini writer’s blocks’. The real Writer’s Block can jam up a writer for days, weeks, months. But a mini can stall a writer for hours or days.


When this happens, I do something else entirely, but hopefully something to do with reading or experiencing life. I think at this time the mind releases itself from the work of trying to build the next scene of your story, or trying to make some form of logical leap from one thought to another, whatever it is, the conscious mind releases itself from the chore. Then the subconscious mind takes over, without one’s clear knowledge.


This to me is the song of the Muse. This is her paper thin voice wafting in the air, breezing past the ear, touching the mind with a cool caress. This is the mind at its best, and it cannot be forced. Like a Muse you cannot demand her to act in your behalf, you have to let time pass and leave it up to her. Also if you free yourself from all anxieties about continuing on with your story and show immense patience, the Muse will never let you down. You need to have faith in her and her ability to act in your behalf. Meaning, in the literal sense, your subconscious will always come to your rescue.


For me, I am always open to the song of the Muse, and when I’m stuck I’ll quickly drop writing and go onto something else. It’s not that I don’t want to tough it out and work out problems with the story; I just believe that my unconscious mind is more creative and inventive than my conscious mind trying to force a round peg into a square hole.


But no matter how you view the Muse, no matter what you think of her in your imagination or your reality, you have to admit that the process works to your advantage at times no matter what type of writer you are.
Thank you so much, Gregory, for your interesting ideas.  And now for a blurb and an excerpt.


A high profile murder of a Wall Street executive in Westchester pits three people against the criminal underbelly of Manhattan nightlife. The key players are two ex-cops turned private investigators—Kevin Whitehouse, whose sharpest tool is his keen analytical mind, and David Allerton, a former Special Forces operative—and Margaret Alexander, Kevin’s lover. In their search for a killer, they are forced to travel to the edge of sanity and morality, while stumbling onto their own confusing secrets as well. The Cover of Darkness is a gritty noir saga that untangles a web of deceit in the course of tracking down a brutal murderer.

David stopped pacing, and then started working on a rock embedded in the dirt with the toe of his shoe. “I wonder why MacDonald didn’t say anything in the interview about the cops being present. He should have told us that there were cops in the Midnight for protection—making sure the dealers were selling and not using.”


“Maybe,” Kevin ventured, “he didn’t want to drop a dime on his cop friends. Maybe he was frightened.”


“Maybe. That would have helped us a lot,” David said, his eye caught by a shapely girl on a bike riding nearby.

Margaret sat up. “That would also explain how the killer got past the gate and simply walked into the house. He could have been flashing a badge.”


“That makes some sense,” Kevin said. “And certainly cops can kill.”


“They make the best assassins, don’t they?” David quipped.


“I would rather it end here, guys,” Margaret said.


David approached the two and stood over them. “The question is now how to hunt the most dangerous thing in New York. Crossing the thin blue line is not going to be fun or easy.”


“We can’t go to Ferryman and Reynolds,” Kevin said, nervously running his fingers through his hair, and retrieving his arm from around Margaret as he sat up. “They’ll only go on the defensive. And if the case starts turning in that direction, they’ll only deflect it.”
AUTHOR INFORMATION:

I'm not a writer, but in my life I often find that if I just let a problem drift through my mind a solution will present itself.

Thank you Ms. Preston for your comment. Yes, it is true, the unconscious, unstressed mind can work better than the mind struggling to find answers. It works for me too.

I would like to take this opportunity to thank Ms. Cantrell for featuring my book on her site and to also thank those who participate by commenting. Everyone, have a great day.

This mystery sounds really awesome, I loved the excerpt.

Thank you for the excerpt, I enjoyed reading it.

Thank you Rita, I'm glad you enjoyed it, and thank you for commenting. Have a great day.

Thank you Bobbye and thanks for stopping by.

Thank you Rachelle, and thanks for stopping by.