The Image of Her #BookReview 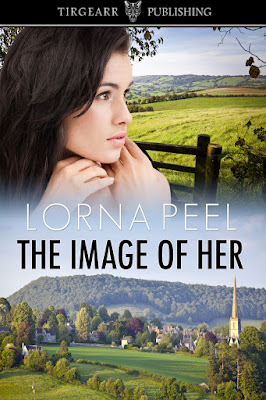 The Image of Her
by Lorna Peel

Rachel Harris had been abandoned as a baby on the steps of a church-run children’s home in England, then later adopted. Who was her birth mother and what were the circumstances which led her to give up her baby?

Searching for someone who doesn’t want to be found seems a hopeless task, until Rachel meets Matthew Williams, a Church of England clergyman.

Then anonymous and increasingly frightening attempts begin and threaten to end their relationship. Are these actions connected to the mysterious events surrounding Rachel’s abandonment?

Hot Vicar Alert! The e-mail screamed at Rachel out of a sea of spam and she glanced at the sender. Kathy Roberts. Hmm. It could mean anything but was doubtless some rubbish joke doing the rounds or, worse still, one which Kathy in her infinite wisdom had dreamt up herself. Rachel braced herself and opened it.

Hi Rachel,
That caught your attention, didn’t it? :-) Anyway, I know HOT and VICAR don’t belong in the same sentence but trust me on this one, OK? Reverend Sykes is on holiday and this guy’s the locum, or stand in, or whatever they’re called in the Church of England, and he’s GORGEOUS. I managed to be at Gran’s when he was doing the rounds of the pensioners and he’s just WOW—tall, dark and handsome—the works. So off you pop to morning service in Upton on Sunday, have an ogle, and you can thank me profusely on Monday, OK? :-)
Kathy

Have an ogle? In church? At the vicar? Well, thank you, Kathy, subtle as ever. Rachel closed the e-mail then began to wade through the rest. It was high time she got one of those spam filter thingies. A second e-mail from Kathy caught her eye and she opened it, wary of its content.

Sorry, Rachel, I forgot to mention that I managed to arrange for said hot vicar to call around to you in the next couple of days about the weird noises you’ve been hearing at the cottage. With a little luck he won’t think you’re nuts and it’ll take your mind off your mum’s nagging for a bit. Good luck with the job interview tomorrow. Found a lodger yet? Ask hot vicar to move in. :-)

Rachel’s mouth fell open. Oh, God, Kathy had told a complete stranger about the weird noises. She rested her forehead on the laptop keyboard and groaned. She ought to be worrying about her job interview, not this. Hot vicar? She couldn’t help but laugh...complete contradiction in terms...

The job interview went well, Rachel mused the following day, as she treated herself to lunch in town. She’d just managed to clear her mind of vicars—hot or otherwise—and weird noises for the half hour duration. She collected her car from the garage, tried not to wince as she paid for the new back bumper, then drove home. She’d better get the job now, and try to remember to bring the advertisement for a lodger with her the next time she went out.

A green Volkswagen Golf was parked outside the cottage as she pulled up. Zippy, her Irish terrier, yapped at the garden gate but she shushed him before going to see who the visitor was.

“Yes?” She shaded her eyes against the sun as a tall man dressed in black got out. “Sorry, I’ve been in town.”

“That’s okay.” His response sounded cheerful. “Your friend wasn’t sure what time your job interview was.”

“My friend?” She tried not to sound suspicious and, to her relief, he laughed kindly.

“Mrs Roberts asked if I could call. My name is Matthew Williams.”

She frowned. This wasn’t hot vicar already? If so, he was scarily eager to learn more about the weird noises. She’d better make sure.

“Sorry, I’m not with you. Are you a Jehovah’s Witness, or something?” She cringed as soon as the words were out of her mouth. Now you’ve said so, he must be. “Because, well, I don’t mean to be rude, but I’m not—”

“I’m Church of England, actually. I’m standing in for Reverend Sykes while he’s away on holiday. Here.” He fished into his jacket’s inside pocket and handed her a business card.

She squinted at it. Reverend Matthew Williams. Editor of The Message - The Magazine of the Church of England Diocese of Aldabury. He lived in Aldabury but—she noted the address—in one of the awful 1960s tower blocks on the north side of the city and not in a vicarage. This had to be hot vicar but, she raised her eyes to him again, he wasn’t wearing a dog collar either, just a plain white shirt under the black suit.

“I’m not a churchgoer, sorry.” She made an awkward shuffle from one foot to the other. “I don’t know what Kathy’s been saying. I know I’ve had a lot of bad luck lately, what with my gran dying, my job disappearing, and then pranging the car. But these things come in threes, don’t they, and I’ve just had my third so…”

“I’ve come about the house, actually.” He gave the old stone cottage, covered in Boston ivy, an appreciative glance. “Your friend was worried about you, er, hearing noises?”

Bingo. He was definitely hot vicar.

Rachel Harris didn't have what you'd call a normal childhood. She was abandoned on the doorstep of a church run child care center. A nice couple adopted her, but when she got older she wanted to know about her birthparents, and that sets off a horrible chain of events that lead to the discovery of her identity. They also lead to true love.

I really enjoyed this book. It had everything in it that I enjoy. The characters weren't stereotyped at all, especially the dishy minister. I wanted everything to work out for them. I also loved the faint sense of undefined menace that sometimes grabbed me. I knew something was wrong, but what was it and who was responsible?

The plot had many twists and turns and was unique. I found myself reading when I should have been doing other things. I didn't guess the whole truth until the author revealed it. I don't think you would either.

The book is well worth a read. I'd give it 5 stars. 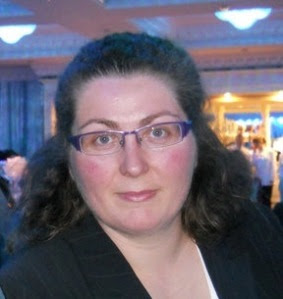 Lorna was born in England and lived in North Wales until her family moved to Ireland to become farmers, which is a book in itself! She lives in rural Ireland, where she writes, researches her family history, and grows fruit and vegetables. She also keeps chickens (and a Guinea Hen who now thinks she’s a chicken!).

Lorna Peel will be awarding a $25 Amazon/BN GC to a randomly drawn winner via rafflecopter during the tour. Use the link below to enter.

a Rafflecopter giveaway
Posted by Elaine Cantrell at 5:30 AM

Email ThisBlogThis!Share to TwitterShare to FacebookShare to Pinterest
Labels: book review, lorna peel, romantic suspense, the image of her

Thank you for reading and reviewing The Image of Her, Elaine!

I have enjoyed the tour. Sounds like a great read.

Really awesome review, I can't wait to read The Image of Her - it sounds like a wonderful book. Thanks for sharing :)

I was really enjoying following this tour, thank you for all the great blog posts and excerpts!

What’s the one genre you haven’t written in yet that you’d like to?