The House on Devil's Bar 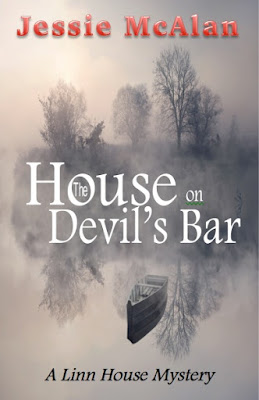 The House on Devil's Bar
by Jessie McAlan

The police verdict of a woman’s accidental drowning in the Mississippi River does more than set tongues wagging in the small Missouri town of Klim; it starts a flood of cancellations that threaten to sink Rona Murray’s bakery and events business. And blacken her good name. Determined to save both, she starts her own investigation to prove she and her property are blameless.  Barbara Lindborg had stopped by Linn House to consider renting it for a party. Yet, when Rona returned from accepting a delivery, the woman had vanished.

Rona’s preliminary search for Barbara yields nothing more than suggestive footprints on the Bar.  Did the woman accidentally fall into the river?  Was she pushed – and if so, why?  A later hunt reveals Barbara’s cell phone in the woods. How did it get halfway up the hill if the woman drowned a hundred feet below? The phone’s camera holds snaps of Klim, its residents, and the Bar. Do any of these hold a clue to her death? Or did her and Rona’s earlier conversation about history and treasure have a different meaning?

Suspects and motives pop up like bubbles in yeast. Is Matt, an employee, still bitter about his and Barbara’s divorce? What about Rona’s own ex, Johnny? Is he trying to drive her out of business, or is his current girlfriend, Crystal, jealous of their relationship and trying to eliminate the competition? A bit like calling the kettle black, for Crystal seems very friendly with Frank, the bad boy neighbor. Frank isn’t lily-white, either. He dislikes Rona; is he behind the pranks on her property or mixed up in Barbara’s death?  It isn’t until Rona’s life is threatened one stormy night that she learns the killer’s identity and her true feelings about Johnny.

EXCERPT:
Rona paused in the doorway and watched Crystal climb the steps to the gazebo.

“Forget about her for the moment, Ronnie.”

“I’m speaking of all those gold bracelets, Dear.”

“Right. I think they’re trinkets from her ex-husband.”

“I didn’t know the wife got gifts at the divorce proceedings.”

“I didn’t phrase that right, Ronnie. He gave them to her during their marriage.”

“So she clings to them instead of his arm. Charming.”

The House on Devil's Bar was a mystery novel that involved me from the first page. I loved the description of Linn House, and I liked the heroine who worried so much about a missing woman. The Mississippi River is almost like a character itself due to the author's flair for description. I tried to guess whodunit, but I didn't. I had the wrong character all along. If you like mysteries I highly recommend The House of Devil's Bar. 4.5 out of 5 stars.
~~~~~~~~~~~~~

A family trip to the Big Spring area in the Missouri Ozarks introduced Jessie to the wonders of nature.  Her summer stints as a camp counselor and canoeing instructor cemented her enthusiasm.  This love of the natural world and the river flows through her Linn House mysteries.
In 2001 Jessie graduated from Webster University with a BA degree and departmental honors in English.

She lives in the St Louis, MO area and spends as much time as she can camping and watching the barges on the river.

Jessie McAlan will be awarding a brown agate pendant 2.5”x1.5” size to a randomly drawn winner via rafflecopter during the tour.

Email ThisBlogThis!Share to TwitterShare to FacebookShare to Pinterest
Labels: Jessie McAlan, mystery, The House on Devil's Bar, US amateur sleuth

Good morning! Thank you, Elaine, for hosting this review of my book -- and thank you for the kind words!

I really did enjoy your book, Jessie. I had another person picked for the villain. Come back anytime.