Murder in Rock and Roll Heaven 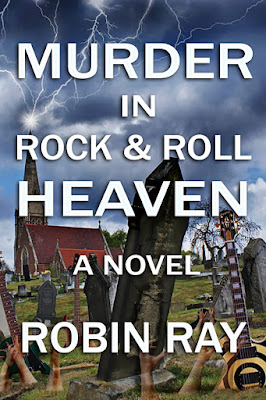 No one ever "re-dies" in Heaven; unfortunately, that’s exactly what happened to singer Amy Winehouse. Her death, an unprecedented event in Heaven's history, has thrown a once docile world into unfortunate chaos. Because of the new uneasy alliance between angels and citizens, a freshly-arrived detective in the rock & roll town has been tasked with investigating the prime suspects, the members of the 27 Club - Jimi Hendrix, Janis Joplin and Jim Morrison. To make matters worse, a powerful angel from one of the upper levels of Heaven will soon arrive to make her ten-year inspection, a task that fills the other angels with dread since she has the power to banish anyone of them to the underworld. So, with time running out, the PI and his newly acquired sidekick, both aided by rock legends such as Eddie Cochran, Mama Cass, Kurt Cobain, Karen Carpenter and others, must quickly uncover the mystery that threatens not only to close Heaven’s doors forever, but promises to send a ripple effect through the entire universe that can rip it apart.

Plants of varying shapes and sizes sprouted everywhere, some just knee high, some as tall as mango trees. Rows of narrow pipes across the ceiling misted the foliage every minute. A few customers were sampling some of the edible flowers while others were reading manuals or informational tags about the unusual plants. Towards the back, the good PI spotted an employee who was busy pulling off the dead leaves from several botanical specimens. The clerk, he noticed, was very colorful with her psychedelic bamboo slippers, purplish pants, flowery blue and white tunic, rows of bangles on each wrist, several beaded chains around her neck, and a pink strip of cloth enmeshed in her long brown hair. As Gregory neared her, he could hear her humming along to the music playing over the virtual speakers high up in the corners of the center.

“Excuse me,” he introduced himself, “I was told Janis Joplin works back here.”

The employee turned and glanced at him. “You found her, babe.”

“Hi, Janis,” the PI introduced himself. “I’m Gregory Angelicus. And…”

“Oh, Lord,” she moaned, flinging the twigs in her hand down. “Another angel. What’d I do now?”

“Oh, no,” he stated quickly, “I’m not an angel. I just wanted to ask you a few questions.”

“About what?” she asked, eyeing the intruder with suspicion through her circular yellow sunglasses.

Gregory looked around momentarily. “Is there some place we can talk?”

“Sure,” she answered, crossing her arms. “You’re standing in it.”

For as long as I can remember, I’ve always liked writing. As a child, I wrote my grandmother’s letters because she didn’t have an affinity for the written language. Because I spent a lot of time alone, I read a ton of books to pass the time. Doing so, I eventually thought about creating my own stories, even at an early age. When I was in high school I wrote a few short stories and even one musical (“Fear of Flying”). In college I wrote more stories and poems. It wasn’t until recently, that is, about four years ago, that I started writing in earnest, completing two novels, five screenplays, around forty short stories and nine novellas thus far.

I’d self-published three books in college. They were “The Robin,” “Scream with the Rhythm,” and “I’m Not A Carpet.” I’d printed and released those myself through my “Sound Off Press” outfit. Even though they were registered with the Library of Congress, I suppose they wouldn’t be considered official releases. My first official release was “Wetland & Other Stories” through All Things That Matter Press from Maine. I’d submitted my manuscript to them and, six months later, they agreed to run with it. I learned a lot about the editing, promotion, and distribution process from them, so that was an eye opener. “Wetland” is a collection of eleven stories, three of which are novellas that were originally screenplays. Someday I’d like to go back and re-write those screenplays as well as some new ones I’d conceived of lately.

3. Besides yourself, who is your favorite author in the genre in which you write?

These days, I read more Stephen King than anyone else because my latest project is a collection of horror stories. I like his style. He doesn’t waste too much time with expository prose and gets right to the meat of his action. Also, Stephen, being so extremely prolific, is a great teacher. I mean, the guy had 47 movies made of his work! That, alone, is impressive enough to warrant a close study of his art.

4. What's the best part of being an author? The worse?

Being an author means less time for me to run the streets and get in trouble with the law! Seriously though, I think being an author is a great gift, especially if you view yourself as a historian as I do. I’m from Trinidad & Tobago, but our folklore and legends aren’t well known outside of those West Indian islands. As a matter of fact, our folklore history even stands getting lost especially since they don’t appear in books and movies like other supernatural beings such as vampires, werewolves, dragons, bogeymen, ghosts, the Golem, the Loch Ness Monster, Bigfoot, and so on. The worse part of being an author is the isolation it often entails. Writing, in and of itself, is a fairly disciplined experience. Once you add research to that mix, you can consider yourself as taking a break from human contact, especially if your research is in subjects you have no familiarity with.

5. What projects are you working on now?

I’ve been writing “Obey the Darkness: Horror Stories” for the past few months and hope to release it by Halloween of this year. It’ll be my seventh published book and my second collection of stories. I feel good about it because, even though the genre is horror, I’ve made sure to include other elements like sci-fi, fantasy, and supernatural beings. Also, since there are stories about real Mayan and Trinidadian folk legends, I saw my book as a chance to perpetuate these myths, keep them alive for the coming generations, if you will. 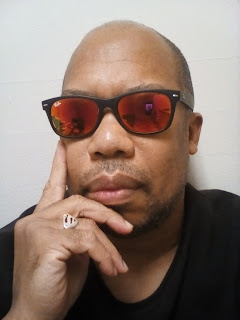 Robin Ray emigrated to the U.S. from Trinidad & Tobago at the ripe old age of 12. Already steeped in the rich culture and mysteries of his native land, it would only be a matter of time before he, too, became a musician and storyteller. After a short stint at Iowa State University, he became a nurse for practical purposes but never abandoned his musical and literary aspirations. Eventually, he did play guitar in several bands, committing himself to localized tours and album releases. Leaving the music world behind, he delved headfirst back into his second love - writing. To date, he has authored six screenplays, two novels, seven novellas, around fifty short stories and many poems. Thus far, he’s published six books - five fiction and one non-fiction, all available in paperback and e-book formats. His latest novel, Murder In Rock & Roll Heaven, can be purchased from the following Amazon link.

Robin Ray will be awarding a $30 Amazon or Barnes and Noble GC to a randomly drawn winner via rafflecopter during the tour.
a Rafflecopter giveaway

congrats on the tour and thanks for the chance to win :0)

I liked the interview.

Thanks Elaine, and greetings to those who visited my blog entry.

What upcoming books are you looking forward to reading? Thanks for the giveaway. I hope that I win. Bernie W BWallace1980(at)hotmail(d0t)com