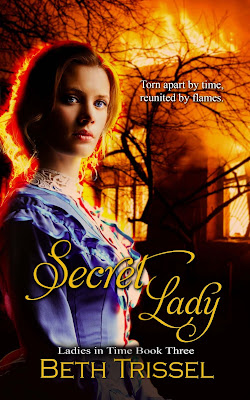 At Lavender House, Evie McIntyre is haunted by the whispers from her bedroom closet. Be-fore she can make sense of their murmurs, the house "warbles" between times and transports her to the Civil War. Past and present have blended, and Evie wishes she'd paid more attention to history. Especially since former Confederate officer, Jack Ramsey, could use a heads up.

Torn between opposing forces, Jack struggles to defend the valley and people he loves. Meet-ing Evie turns his already tumultuous world upside down. Will solving the mystery of the whispers return her home, and will the handsome scout be by her side?

Against the background of Sheridan's Burning of the Shenandoah Valley, Jack and Evie fight to save their friends and themselves – or is history carved in stone?

What had happened to the room?

Nothing in the parlor was as it had been a short while ago. Furnishings suited to a monastery had
displaced the frou-frou décor. Simple wooden chairs, stools, and a plain couch were arranged in a circle. A small table supported a large black book, possibly the Bible. Discarded knitting lay on a side table. A spinning wheel sat in one corner.

There were no frills anywhere. No lavender sprigged wallpaper or lacy valentines, or anything she
remembered. Her grandmother’s cherished things were gone. Everything had changed, and yet, the layout of the room was the same.

Was she lost in a dream, or had she stepped into a parallel universe? That sometimes happened…in Doctor Who, not her world.

Oh, my,” she gulped, and blindly reached out to steady herself against the back of a chair. “Not what I was expecting.”

“Nor are you.” The man called Jack returned the match tin to his pouch and studied her by the flickering light, his sandy brows arching under the broad brim.

“Whew.” He thumbed his hat back. “You’re nothing like Hettie Wenger.”

“Not in this life,” she said in a bare whisper, realization nagging at her.

“Did you have another?”

She nodded, gazing into the most glorious greenish-brown eyes, like sun-dappled trees. Wham.
Lightning bolt impact.

I always enjoy time travel novels, and this one was no exception. Evie McIntyre is a modern girl working with her grandmother at Lavender House, a Victoria property that survived Union general Sheridan’s burning back during the Civil War. Her biggest problem is that whispers and murmurs are coming from the closet in her room, and she’s scared to death. One night the house ‘warbles’ between times and transports her back to the Civil War era where former Confederate office Jack Ramsey befriends her. Almost immediately there is a strong connection between them. Now all Evie has to do is figure out how to help the family currently living in Lavender House and get Jack safely to 2019.

The characters in the book are sympathetic and likeable. I especially liked Jack because he showed good depth of character due to his conflict over his own role in the war. The plot was well thought out, and logically reached its conclusion. The pacing was just right. The book is an easy read. I read the whole thing in half a day.

If you believe in soul mates, true love, and destiny you’re sure to enjoy this one. I’d give it 4 out of 5 stars.

Married to her high school sweetheart, Beth Trissel lives on a farm in the Shenandoah Valley of Virginia surrounded by her human family and furbabies. An avid gardener, her love of herbs and heirloom plants figures into her work. The rich history of Virginia, the Native Americans, and the people who journeyed here from far beyond her borders are at the heart of her inspiration. She's especially drawn to colonial America, the drama of the American Revolution, and the Civil War. And she loves a good ghost story. She writes Young Adult, New Adult, historical, time travel, and paranormal romance, plus nonfiction. Secret Lady (Ladies in Time) was based events that occurred to her ancestors and her husband’s Mennonite forebears during the Civil War in the Shenandoah Valley.

Secret Ladyis available in kindle and print at Amazon: https://www.amazon.com/Secret-Lady-Ladies-Time-Book-ebook/dp/B07KNL7K3Z

And in eBook format from all other online publishers.

For more on Beth visit her blog, One Writer’s Way, at: https://bethtrissel.wordpress.com

Beth Trissel will be awarding a $25 Amazon or Barnes and Noble GC to a randomly drawn winner via rafflecopter during the tour.

Thanks so much for hosting and the wonderful review. Please post it everywhere.

My family and I all appreciate you bringing to our attention the book description of another great book to read. Thanks so much!