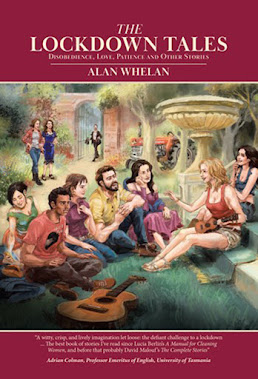 Seven women and three men leave the city to avoid a pandemic. They isolate together in a local farm, where they pass the time working, flirting, eating, drinking, making music and above all telling stories. It happened in Florence in 1351, during the Plague, and gave us Boccaccio's Decameron.

Seven hundred years later, in Australia, it happens again. The stories are very different, but they're still bawdy, satirical, funny and sometimes sad, and they celebrate human cleverness, love, courage and imagination.

"Alan Whelan brings us a clever, sensual and sometimes poignant collection of stories that would make Boccaccio proud"

- Tangea Tansley, author of A Question of Belonging

"An old frame for a sharp new snapshot of contemporary Australia"

- Leigh Swinbourne, author of Shadow in the Forest

It was late and getting cold by the time Margo’s story was done. I reflected that she’d come a long way, in the three weeks she’d been here. She’d got close to Sue and Stuart, and they’d helped her believe that she could come back from Harry’s death.

Stuart and Danny pushed my barbecue back to the house, with Sue and Margo helping to keep it steady. This time it didn’t tip over.

Bran and Astrid stayed close to the fire, which had died down from a bonfire to a campfire. Jayleen and Bob stayed close. Bob had slept through most of the stories and was now awake, and enthralled by the night, the lake and the fire. I heard Astrid say, “The beast with three backs!” She punched Bran, amused.

Grace had relented after a stoned night of mostly ignoring Amelia. They walked back to the house together. I didn’t fancy Amelia’s chances much, either. But I knew that I’d make no declarations to Amelia unless her infatuation with Grace had been resolved and gone.

I collected empty bottles and put them in my pack. I probably missed some, but I’d check the ground in the morning. I shrugged the pack on and trudged back to the house.

I shut the door behind me and went up to my bed.

The very first thing I remember wanting to be was a fireman, cause I really liked the red wagons and the big black boots. Then I thought it’d be cool to be a farmer, and grow all my own food. Colour and food were strong motivators for me when I was about five. I guess they still are.

(I felt sorry for all the people whose houses were on fire, but I was never going to get those big black boots. Just a ball point pen would suit me fine.)

I started by writing science fiction stories, that I bet were terrible, but my friends, parents and teachers seemed to think they were good and “showed promise”. I’m certain they weren’t good, and I’m pleased with my amazing foresight in not keeping a single one of them. I’d hate to read them now.

Still, I remember becoming aware of pacing for the first time, while I was trying to write the way the grown-up writers I liked did. I taught myself to slow down the telling of the story, and start focusing on characters’ thoughts, especially their doubts, make sure the reader knows the physical environment they’re in, and so on.

I left science fiction behind some time in my early teens. Now I mostly write contemporary realism, and occasionally historical realism. Realism doesn’t just mean I don’t do dragons, werewolves, vampires and zombies, though I don’t. It means that characters should feel credible and real, and what they say should sound like the sort of thing that person would say. The events should be the sort of thing that happen in the real world, because real people and events are wonderful and amazing.

So, apart from a brief love affair with fire-fighting gear and farming, I’ve always wanted to be a writer.

My first full-length published fiction is The Lockdown Tales. I began writing it in March 2020, when it was obvious that I wouldn’t be going out much in  the foreseeable future, and finished in October 2020, when the lockdown was still continuing.

I wrote it because I saw a need for stories: people would be at home and occasionally going stir-crazy. It seemed to me that the best thing I could do is write the story of ten people who go to the country together to ride it out, and who tell each other stories to keep their spirits up and stay sane. The stories are good stories, but there’s an underlying theme, that people do mostly act well to each other even in hard times. Courage, kindness, cleverness and hope, says The Lockdown Tales, are better than their alternatives.

Traditional publishers had effectively closed their lists for the duration of the lockdown. I decided that because this book is timely, I’d get literary endorsements for it from critics and published novelists, to make it clear that this is a genuinely good book and not a vanity product, and then publish it myself. I went with Tellwell, who I think did well, were helpful (I learned a hell of a lot), and produced a very attractive product.

(There’s also a Troy McClure answer: “Hi! I’m Alan Whelan! You may remember me from such books as Renting and You, How to Buy Your Own Home and New Zealand Republic.  Those are my actual first books. But The Lockdown Tales is my first published full-length work of fiction.)

I admire Margaret Atwood, though more for the realist novels than for The Handmaid’s Tale. (There’s nothing wrong with Handmaid; it just isn’t my genre.)

I’ve probably admired more novels by Martin Amis than any other writer who’s still alive. That’s while being aware that as well as writing wonderful sentences, he has his faults and blind spots. .

The best part of being a writer is going for a long walk, and finding characters and plots emerging in your brain. The next part is writing the first draft when it’s going well, and the second draft, where you aim to make it actually good.

The worst part is when the first draft is not going well, and you have to force the stuff out of yourself. The next worst part is the final half-dozen or so revisions, when you know the book too well, and you’re still getting shocked, finding typos and bits of bad writing that have to be fixed.

I suppose people giving me money and telling me I’m a genius, that must be good too. I don’t seem to have got to that bit yet.

I just yesterday finished the second and last volume of The Lockdown Tales.

My model is Boccaccio’s Decameron, so I’m following his structure. Once each character has told ten stories, making 100 stories, the group breaks up and most of them go home. (It’s 101 stories for me, as a sort of homage to The Thousand and One Nights.)

Today, because I don’t feel like resting, I’m going back to the novel I was working on at the beginning of last year. It’s set in Persia in 1865, with a young Irish-American man who gets involved in Great Power rivalry.

I’m going to re-read what I’ve got (about 150 pages so far), go for a long, long walk, and come back and start revising. I can’t go forward when I think the foundation is weak, and having taken time away from it I know the early structure isn’t solid. So revising before I continue the story is just unavoidable. 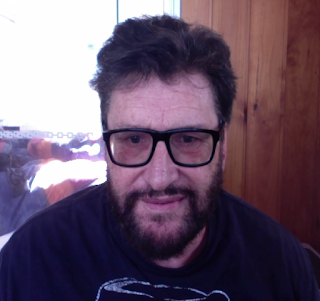 Alan Whelan lives in the Blue Mountains of NSW, Australia. He’s been a political activist, mainly on homelessness, landlord-tenant issues and unemployment, and a public servant writing social policy for governments. He’s now a free-lance writer, editor and researcher.

His story, There Is, was short-listed for the Newcastle Short Story Award in June 2020, and appeared in their 2020 anthology. His story, Wilful Damage, won a Merit Prize in the TulipTree Publications (Colorado) September 2020 Short Story Competition, and appears in their anthology, Stories that Need to be Told. It was nominated by the publisher for the 2021 Pushcart Prize.

His book The Lockdown Tales, using Boccaccio’s Decameron framework to show people living with the Covid-19 lockdown, is now on sale in paperback and ebook.

Alan Whelan co-wrote the book, New Zealand Republic, and has had journalism and comment pieces published in The New Zealand Listener and every major New Zealand newspaper, plus The Australian and the Sydney Morning Herald.

He wrote two books for the NZ Government: Renting and You and How to Buy Your Own Home. His stories also appear in Stories of Hope, a 2020 anthology to raise funds for Australian bushfire victims, and other anthologies.

His phone number is +61 433 159 663. Enthusiastic acceptances and emphatic rejections, also thoughtful questions, are generally sent by email to alan@alanwhelan.org.

ADD THE LOCKDOWN TALES TO YOUR GOODREADS SHELF

Alan Whelan will be awarding a $15 Amazon/BN GC to a randomly drawn winner via rafflecopter during the tour.

What was the worst part of Covid for you.

Linda asked about the worst part of lockdown for me. I did't gather nine people around me and go into the country to socially isolate with company.

So I spent a lot of time alone. And I like to have people around me, so it tested my sanity and may patience.

So the worst part of lockdown was loneliness.

On the other hand, the isolation of lockdown gave me plenty of time to think and write. I don't want to sound too up myself, but this was the hardest and best use of all my creative and intellectual powers at once. It was a massive challenge, and I worked hard, and wrestled with it, and produced something that's got a bit of depth and human realism, but that its also fun to read.

After you've finished a book and it's published, it's set and you're still moving. So the person who write The Lockdown Tales is already someone different from me, and partly still me. Anyway, I'm proud of both of us.

Regards to all, and I'm happy to answer any questions!