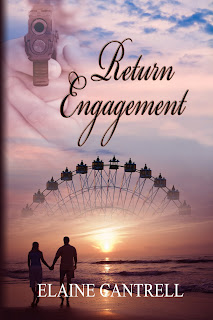 Today I'd like to share an excerpt from my new novel Return Engagement. My heroine Elizabeth is a famous movie star. My hero Richard is an FBI agent whose father is a wealthy, powerful senator. In this excerpt, Richard and his partner have gone to rescue Elizabeth who has been kidnapped.


Neither Scott nor Richard would ever forget the trip to 2341 East McJunkin Street. Both of them had worked under pressure before, but it hadn’t affected them the way this trip
did. Personal involvement made a huge difference.

Richard hadn’t said a word during the entire trip. He couldn’t. Once or twice before he had reached the point where his emotions just froze on him; that’s where he was
now. He felt strangely detached from Scott and even from Elizabeth. Some cold, chilling frost had fallen on him; he eagerly anticipated the opportunity to deal with the ones who
dared to hurt the woman he loved.

Scott had stared at him for the last block or so, and he finally snapped, “Why are you staring at me?”

Scott didn’t pull any punches. “I’m trying to figure out how stable you are. If you lose your head and do something stupid we’re in trouble. You’ll probably see some things you
won’t like, but if you want to save her, you’ve got to be cool and keep your head.”

Richard’s eyes, filled with blue fire, bored into Scott’s. “I’m fine. Don’t worry about me. I know what I’m doing.”

They parked their car half a block from the motel and proceeded on foot, entering the property from the back side where they saw three cars parked in the lot. Richard gestured
toward a gold Lexus. “That’s her car parked beside the Jaguar.” He read the license plate on the black Jaguar and his knees sagged. “That’s Dad’s car,” he choked.

Scott voiced a horrible thought. “You said he wanted to pick out your wife. Do you think he’s trying to scare Elizabeth off?”

Richard shot him a look that would’ve melted stone. “You’ve been around Dad long enough to know better than that. Dad’s not some kind of thug.”

“I hope you’re right, but you love your father. You might not see him clearly. I think he’d do almost anything to advance your career. Scaring a woman probably wouldn’t seem too bad to him.”

Richard barely heard this last slight to his father. With drawn guns the two men cautiously made their way toward the door nearest the parked cars. It was locked. Damn!
They’d lose precious time looking for the right place.

They tried two more doors before they came to room 205. The door moved easily when Richard tried to open it. He nodded to Scott. Soundlessly, the two agents entered the
building.
Posted by Elaine Cantrell at 4:49 PM

Thanks, Debra. I appreciate your stopping by.

Thank you, Christina. Return Engagement is my favorite of all books. I worked really hard on it so the review is especially sweet.