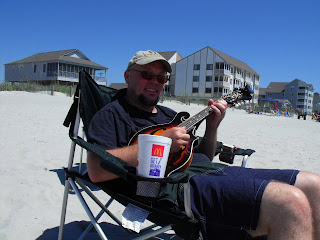 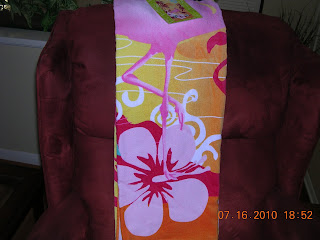 Hello! The beach party's winding down, but we still have two excerpts to go. If you'd like to read the excerpts in order go back to the first beach party post. You have to leave a comment to be entered in the contest for the prizes. If you do leave your email address so I can contact you if you win.

If you'd like to purchase Return Engagement it's available at http://www.whiskeycreekpress.com

The pictures are of one of the prizes, a nice beach towel, and the other is my son at our real life beach party.

Now for an excerpt. it takes place where the last one left off.

“Elizabeth, you were fantastic! That’s your best performances yet,” the director enthused. “Working outdoors agrees with you. Paradise Bay has Oscar written all over it.”

“Wow, this is a red letter day,” one of the nearby camera men called. “Jay never has a good word to say about anyone.”

“Thanks, Jay. That means a lot,” Elizabeth replied.

He stared curiously at her. “What’s wrong with you? You look awfully nervous. You’re about to chew your lip off, and you keep staring at the crowd. Did something happen that I didn’t see? Are the damn paparazzi bothering you?”

Jay patted her shoulder. “Well, it’s Friday so go home and get some rest. You deserve it after the performance you gave today.”

Where is he? Surely he wouldn’t just leave!

The voice came from behind her, deeper and fuller than she remembered. “Hello, Elizabeth. It’s been a long time.”

Elizabeth’s heart leaped into her throat as she whirled around. At times during the past ten years she’d felt sure she had forgotten him, but just when she least expected it, she’d find him dancing on the fringes of her mind.

She had always hoped they’d meet again, but truly she hadn’t expected it to happen. To her chagrin the sheer animal magnetism of the man stayed her tongue and made her feel like a star struck groupie. She said the only thing she could think of. “Hey.”

Richard grinned at her, his smile still the same warm, in-timate smile that had melted her heart ten years earlier. “That’s not much of a greeting since we haven’t seen each other in so long. Are you as nervous as I am?”

Elizabeth smiled too, more about the quizzical expression on his face than his words. Richard had always made her smile. “I don’t know what to say,” she admitted. “You could have knocked me over with a feather when I saw you in the crowd. To be honest, all I really want to do is look at you. You’re more handsome than the law allows, you know.”

She saw him shoot an appraising look her way. “You aren’t so bad yourself.”

Elizabeth’s heart lurched into her throat as they shared a brief, thrilling moment of eye contact. “I always promised myself that if we ever ran into each other I’d be cool and calm and not embarrass myself, but…” She laughed ruefully. “It isn’t working out that way at all. I…I’ve always hoped we’d see each other again, but I didn’t think it would happen.”

Her eyes fell as reality intruded. “I’ve got money and fame now, but the Lovinggood family is still totally out of my league. You don’t need the Hollywood set to validate you or keep you amused. In fact, I’d bet anything Senator Loving-good holds the Hollywood set in contempt.”

Richard ignored her comments about his family. “Have dinner with me tonight,” he urged. “We have ten years of catching up to do.”

Elizabeth felt a flicker of unease; she shouldn’t accept his invitation. Her heart belonged to a wonderful man, a man she didn’t want to hurt by going out with Richard. Richard belonged to her past, and that’s where he needed to stay; in the past. No good could come of a dinner date now. For a split second she hesitated. “I’d love to have dinner with you. Just give me a few minutes to change. Where are we going? What should I wear?”

“Elizabeth, we’re at the beach,” he teased. “Wear shorts of course.”

“Well naturally, what else. I’ll be right out.”
Posted by Elaine Cantrell at 4:59 PM

Another great excerpt and your son looks like he is having a good ol time :)
tamben7996(at)aol(dot)com

You should hear him play!

I see trouble brewing. Hope she doesn't get her heart ripped out again.

Wonderful excerpt the book sounds like it's getting very interesting for Elizabeth.peg360@hotmail .com

Wonder what they'll talk about.

Finally!!! lol
I've waited the whole beach party to read their first encounter after 10 years, and it was totally worth the wait. What a great excerpt!

a real beach party would be an experience for me; never been to one.