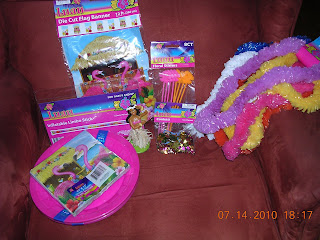 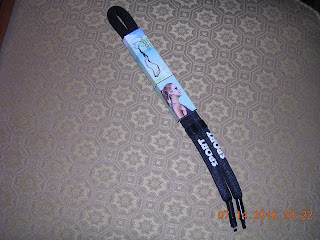 Please read the first beach party post for information about the beach party. The pictures show some of the prizes up for grabs. One is a luau for six, and the other is a lanyard that you attach to your sunglasses so if they fall off in the water they'll float. This excerpt takes place right after the one in beach party 4. To read chronologically start with the first post.

Venice Beach was a California institution. Founded in the 1890’s, the beach’s popularity had waxed and waned across the years until the 1984 summer Olympics turned it once more into a major tourist attraction. You could always find something to do in Venice.

Richard merged into the crowd and spent a few minutes watching a street artist at work before deciding he’d really rather spend his time near the water. He made his way to-ward the shore and sat down to admire the view. Shading his eyes, he watched some surfers trying to ride the waves and chuckled to himself. They weren’t very good. He had tried surfing years ago, but he didn’t especially like it. If he had free time he’d rather go riding. He smiled when he thought of his new horse. Too Bold would give him a challenge.

A little further down the beach a group of volleyball players yelled encouragement to each other. Girls vs. guys, thought Richard. I’d rather play for the girls any day, espe-cially if they look like that blonde with the nice butt.

Hoping to get into the game, he jumped up to make his way down the beach, but out of the corner of his eye he spot-ted a group of people surrounding a roped off area. What were they looking at?

Curious, he wandered over to see. “What’s going on?” he asked one of the bystanders.

“Someone’s making a movie. They’re supposed to start in a few minutes if you want to stay and watch.”

Richard decided he might as well stay. Since he was on vacation, he had no appointments to keep. A brief, familiar slash of pain cut him. Movie making had interested him ever since…a long time ago. He saw the actors making their way to the set and tried to identify them, but he didn’t see anyone he recognized. Either this was a low budget movie, or the stars hadn’t made an appearance yet.

The director, a small man with a bushy, red mustache that made Richard think of a walrus, introduced himself and addressed the crowd, saying, “Any of you want to be in the movie? We could use some people in the background. If you’re interested go to my right and see the man in the blue shirt. He’ll fill you in. The rest of you stand back, and try not to get in the way. The name of this movie is Paradise Bay, and our star is one of Hollywood’s finest leading ladies, Elizabeth Lane.”

Richard uneasily shifted from foot to foot and tried to swallow the lump in his throat. He had often dreamed of seeing Elizabeth again. Once or twice he had even picked up the phone to dial her number, but he never had completed the call. He couldn’t; another rejection would have killed him.

An icy chill swept across him in spite of the warm sun. He was still afraid she’d reject him. Now one of the biggest stars in Hollywood, Elizabeth Lane could have any man she wanted. In fact, he’d heard on TV that she’d gotten engaged to some lawyer. He couldn’t think of a single reason why she’d have any interest in seeing an old boy friend again. The last time they saw each other he’d been a green, inexperienced kid which was probably the way she still thought of him. A grim smile crossed his face. He hated that damn lawyer. He’d give anything to have the guy in front of him for five minutes.

He vividly remembered their last date. They had almost gone to bed together, but at the last minute she had changed her mind and sent him home. He had called her every day for a week, but she had refused to see him. Finally, she had refused to even talk to him.

He took a deep breath and blew it out. Even now that episode stood out as the most horrible experience of his life, but he was only seventeen, and his father had made sure he stayed too busy to mope.

He had gone away to school the following year and had never seen Elizabeth again. Not in person, anyway. He’d seen her on TV and had faithfully watched every movie she ever made. It felt a little bit like rubbing salt into a new and stinging wound, but he knew he couldn’t break the habit so he didn’t even try.

Gah, he had started to sweat! Would she take the time to say hello to him? Probably, if he could get close enough to her. Security had to be tight with a major star on hand. He saw a number of men with cameras. Paparazzi. Yeah, they’d have some security, or those blood suckers would torment the stars unmercifully. How could anyone stand reading the trash the tabloids dished up on a daily basis? One writer who had left a popular publication had frankly admitted that he just made up the captions which went with the photographs in the magazine. Naturally, some of the stories were true, though. Maybe that’s why people read them.

If he went into politics he’d have to watch himself. Re-porters loved to dig up dirt on politicians. Huh! His father went ballistic if he did anything at all to attract negative atten-tion. If he ever got into a major scandal the senator would probably kill him. Or at least hurt him real bad.

His stomach lurched when he saw movement just beyond the roped off area. Was she coming? Elizabeth had liked him as a kid, but what would she think of him as a man? What if he was a disappointment to her? Why didn’t they hurry up and get this thing over with?
With an effort born of training and long practice, Richard brought his emotions under control. He had waited ten years for this moment to come; he could wait a few minutes more.
Posted by Elaine Cantrell at 9:27 PM

I love the beach and wisi I lived closer. Great party and wishing you great success with your fantastic new book!
tamben7996(at)aol(dot)com

It has been fun reading these excerpts!

Thank you, ladies. I appreciate it.

Ok, it's the moment of truth...you can't just leave us hanging :-(
We need another excerpt please....pretty please with a cherry on top!!
~Afshan

I love the beach. I lived in Texas 20 miles from Gulf of Mexico for a yar and dearly loved it. Boy the surf fishing in Texas and the Gulf was quite an adventure.
jrs362 (at) hotmail (dot) com

This is a great story! Please let me know where to purchase the book. I am hooked and want to know what happens next! Congratulations on your success!

I love the beach and water! Great party, I loved reading the exscerpt!

I'm so glad everone's enjoying the excerpts. The book can be purchased at http://www.whiskeycreekpress.com, or if you live close to me I have copies available.

The excerpts were so great. Wish I were really at the beach. Thanks for inviting us to your party.

Great excerpt,Elaine. It's put me in the mood for sun and a seafood platter. Good luck with the book!

Thanks for all the excerpts.

I've never been to the beach but I plan on it soon. Great excerpts.

don't live near a beach and it is hot here so being at the beach party has been wonderful.

I agree that another excerpt would be great; thanks.

Great party and thanks for the excerpts!

Congratulations on the release of your book! Wishing you loads of success!

arghh the perfect place to leave us hanging and wanting more lol. Thanks for all the enjoyable excerpts!!

Now I wonder if she recognizes him. I'm sure his father would have a fit if he knew about this.

Sorry, I forgot my email.