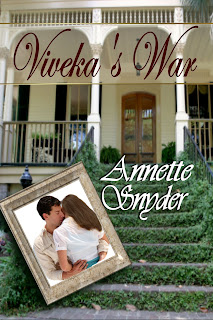 My guest today is Annette Snyder. Annette and I are both Whiskey Creek Press authors. Annette, thanks so much for coming. I can't wait to hear what you have to say, so I'll turn it over to you.

Just a bit over the first month of the New Year and I’ve abandoned my resolutions. It’s a new record for me. The new record being that I’ve never lasted this long before tossing away my vow to change my bad habits.

Stop over eating, be less critical and behave in a manner acceptable by nuns—those were the three small changes I attempted.

Declaration One-Overeating. Well, leftover pie shouldn’t have been left sitting out and available.

Number Two-Be Less Critical. Have you even listened to the news about America’s political system?

Vow Three-Behave. To be honest, I forgot who I was when I made that resolution two seconds before midnight on New Year’s Eve so it really shouldn’t count!

I have, on the other hand, begun readjusting the final draft of a story I’ve been writing for a solid year. Respectable Affair is the last of my Viveka’s War Trilogy. Viveka’s War, an historical set during the Depression, follows the struggles of a woman as she uses learned abilities of strength, character and survival choices to build a life of independence.

Eureka Springs is the second novel in that series. Beginning life in a new direction is harder than Ruth Seidle realizes when hidden secrets surface. With an obscure past exposed, can Ruth forsake lies for honesty in effort to change previous behavior?

Respectable Affair is a prequel story and the idea came from a four book review from LASR for Eureka Springs when the reviewer said, “Annette Snyder gives the reader an excellent glimpse into the morals of society, the quest for material gain and social position that flourished after World War II. She also gives a glimpse into Aunt Virginia’s life, a heartfelt love story of a single woman.” I began to think of Aunt Virgie and how she got to Eureka Springs and, for heaven’s sake, why was she single?

I also started a new blog, Fifty Authors from Fifty States, http://annettesnyder.blogspot.com
You can also access it through my website http://annettesnyder.atspace.com
When you get there, you’ll find an assemblage of many writing professionals from all over the USA and some special guests from overseas. Fifty Authors from Fifty States showcases many genres, writing styles, promotional companies and reviewers. Each week presents a new experience, a new chance to learn about another section of our country. Discover the amazing amount of talent our country has to offer readers by visiting. There’s also a pretty cool contest for people who comment and some of my guest bloggers are offering their own prizes. Its well worth the few minutes it takes to click, read and comment. And here’s a hint-Elaine Cantrell Guests the week of October 2nd.

So, I’ve still got some resolutions in the fire even if the big ones have been tossed to the curb and I don’t actually feel bad about that. Well maybe I do for Number Three but even a little effort in that area is an improvement.
For more information on my work, visit my website or go to www.whiskeycreekpress.com where you’ll be able to read the first chapter and purchase each of my novels.


"Behave in a manner acceptable by nuns." That cracked me up. Thanks for coming, Annette. Good luck with Respectful Affair, and come back to see us soon.
Posted by Elaine Cantrell at 10:17 PM

thanks so much for having me Elaine!

You're welcome. Your nuns comment really did crack me up.

my aunt is a nun...I crack her up all the time!