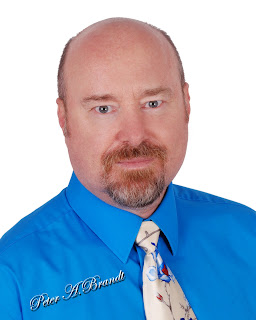 Welcome to my blog.  You'll want to be sure to leave a comment for my special guest Peter A. Brandt.  Peter's giving away some very unique prizes.  Two winners will win a pint jug of Butternut Mountain Farm Vermont Pure Maple Syrup, Grade A Dark Amber, in honor of the main character of The Maple Express, Sara Maple, from the small town of Mapleton Vermont.  One grand prize winner will win an awesome Bachmann Trains Pegasus Ready-to-Run HO Scale Train Set. I encourage you to follow the tour and comment; the more you comment, the better your chances of winning. The tour dates can be found here:http://goddessfishpromotions.blogspot.com/2012/02/virtual-book-tour-maple-express-by.html.

Peter, thank you so much for coming by.  Could you tell us a little bit about yourself?
First off I want to thank you Elaine for hosting me today. This is all new to me so having you help me on this is truly appreciated.
My name is Pete and I write under the name Peter A. Brandt. I am married and we have five kids who are all adults now. I am a Canadian and my wife Carly and I live in the Middle East where I am working as a Technical Writer. I was in the Army and Air Force and used my technical background to become a technical writer when I retired.
I don't miss the winters, yet, but the summers here are brutally hot so we try to get back to North America during that time.
I love to write anything - novels, screenplays, technical writing and I am even trained as an actor. I have acted in some movies and television shows and some of my acting reels can be found on my personal website.
I just wrote a screenplay for a director friend of mine and even wrote myself an acting part in it. We filmed it last month. 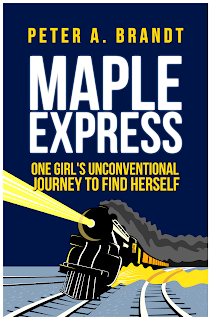 2.Very interesting, Peter.  I've never been to the Middle East.  Is this your first YA novel?  Have you written other things as well?
No. I have written several novels before but only recently did I realize they were all young adult fiction.
"2066" is about life on earth in the year 2066 with global warming and no oil. A young man with the ability to see the weather and future of earth has been asked to go find an old shaman’s daughter who has disappeared in a vile part of the earth.
"Crown Prince from Texas" is about a young man from Texas who thinks a made for TV movie is all about his life and decides to head to Canada to claim his stolen birthright as the crown prince of Canada. Both of these stories include young people in the lead roles.
I grew up with the Hardy Boys and Nancy Drew series and my next novel, "Holly Alexander and the Mystery of the Courthouse Square" is fashioned after those novels. It is also about a young girl who moves to a new town and soon finds herself in major trouble that will take all of her cunning and help from her new friends to get out of it.
3.They all sound wonderful, especially the Holly Alexander novel.  When speaking about The Maple Express, you said, "The Maple Express delves into the actions and consequences of a young girl who has never had to take responsibility for her actions before."  Did something you observed in the real world motivate you to write this novel?
Yes, I grew up in a very dysfunctional household, which did nothing for my self-esteem so being very small, and immature I was bullied a lot.
Sara Maple is a bully who was taught by her wealthy mother about being entitled and doesn’t like it when she doesn’t get her way. I have a real thing for bullies and writing about Sara brought out some hidden anger issues in me, but, with most things in life, Sara has the opportunity to change how she treats herself and the rest of the world. It takes an unconventional journey for her to confront these issues.
4.How do you think writing a YA novel is different from writing an adult novel?


So for me, writing young adult stories gives me an opportunity to show young people, who think they have nothing to offer the world, that they have a lifetime ahead of them to become whoever they want to be. Young people are at that point in their life where they are ready to step out into the world and positive feedback to boost their self-esteem is very helpful.
For me, I never really grew up. I still act like a kid most of time. I was appallingly ordinary, geeky, a late bloomer in body and mind and didn’t have much going for me when I was a kid, and yet I turned out to have a pretty sweet life.
Adult books are different in that most adults already know what their destiny in life is and have gone for it or have consciously ignored the call. I think writing adult stories are more geared toward a dilemma and making them work through it than boosting their self-esteem and showing them new ways to live their life.
5.Good answer!  Would you share your links with us?
My personal website is http://www.peterabrandt.com and publishing company is www.simplesimonpublishing.com.
6.We'd love to read an excerpt.
BLURB:   Sara Maple has a comfortable life—the only child of a wealthy family—a best friend who does everything she asks—and the admiration of most of her schoolmates. Unfortunately, her temper and “indestructible” attitude quickly place her in a very precarious position.

“The Maple Express” is a powerful novel that captures the author’s take on the miracle of the human mind. “The Maple Express” delves into the actions and consequences of a young girl who has never had to take responsibility for her actions before. The story brings the reader into a world where Sara’s determination to find her way off the train sends her on an emotional trip that bonds her to her new friends and changes her life forever.

Both young and old readers will love the emotional journey Sara Maple takes them on as she deciphers the obstacles that confront her. Sara’s story ends with a surprise twist and leaves the reader with a sense of discovery about his or her own humanity.
It took Sara a few seconds to comprehend where she was. As best as she could tell, she was staring at an upside down Thomas Cole painting that appeared to be zipping along at a tremendous rate of speed.
The wind in her hair and face made her eyes water and saliva run from the corner of her mouth. Sara closed her mouth and swallowed.
The last thing she remembered was stepping up on the ladder that led to the train engine. When she woke, she was staring at the scenery, dangling upside down, and being held by something that had wrapped itself around her ankle. Her face was mere inches from the ground. She couldn’t distinguish any one individual rock — they were all shooting past her too fast to see anything more than a blur.
Sara turned her head to find out where the noise was coming from. She knew the sound of the wind that rattled past her but the throaty metallic rattle that overpowered it was far more excruciating on her ears.
The wind spun her a quarter turn and what she saw caused a scream to erupt from deep inside. Two large train wheels were spinning along steel tracks. The sound she heard was steel hitting steel. The pistons created the swooshing sound as they pounded the wheels around, propelling the train forward.
Sara looked for something to grab onto but there was nothing within her reach. She felt like a side of beef dangling in a butcher’s freezer.
Pete, thanks so much for joining us.  Your work sounds fabulous.
Posted by Elaine Cantrell at 12:00 AM

Thank you for hosting Peter today.

I think your stories, all of them, sound really great. So many YA books are tepid. These sound as though they are real.

Thank you for the comments MomJane. They are appreciated.
I was fortunate to become a technical writer and I realized that the huge 300 page document I was working on got written when I concentrated on 10 pages a day. It all adds up quickly.

Just pace your story. the 90 Day Novel by Alan Watt is excellent in identifying real issues like pacing. Are you still writing?

Pete...It sounds like you have an eclectic background. From what I've read, there are many opportunities in the Middle East. I hear a lot about Dubai. Do you fit your fiction writing in around your technical writing work?

Thanks for your comment Catherine Lee.
One of my coworkers is from Dubai so I can't say too much but its kind of like Las Vegas. Abu Dhabi is a little more conservative and calmer place to live. Dubai has some strange laws that are not very appealing to me so I try to spend as little time there as I can.
Yes my technical writing is 8 to 4:30 and the rest of the time is for creative writing...novels and screenplays. Last fall I took a week off and wrote for 7 days straight. That was fantastic and I got 1/2 of my California novel written.