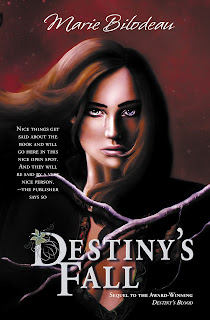 Welcome to Marie Bilodeau's blog tour. Marie is the author of Destiny's Fall, and she's here today to tell us a little bit about herself and her book. You can follow her tour at http://goddessfishpromotions.blogspot.com/2012/04/virtual-book-tour-destinys-fall-by.html Do comment often. Just listen to this nice prize. She's giving away a signed electronic copy of Destiny's Blood, the first book in her series, at every stop on her tour. That means one commenter on this blog wins a book.  She's also giving away an autographed set of Destiny's Blood and Destiny's Fall to one random commenter throughout her tour. Print books are for Canada and the US only, but internationally she's giving away the same books in electronic format.  Cool, right?  Marie, welcome.

1.Tell us a little bit about yourself.  Did you always want to be a writer?


My mother tongue is French.  Not France French, but Canadian French (which is vastly different, some will argue).  I discovered English through fantasy literature. My brother handed me a Forgotten Realms trilogy when I was fourteen, and I was hooked.


I don’t know that I always wanted to be a writer, but I’ve always loved telling stories, and I probably always will.  It got me in trouble a lot as a child, but it seems to be working out for me, now!

2.It certainly does.  For anyone not familiar with your work, what genres do you write in?  Have you ever considered other genres?


I have a fantasy trilogy, the Heirs of a Broken Land, and a sci-fi series, Destiny.  I love pondering writing in other genres.  A whole new set of rules!  I’d love to try my hand at horror. It’s full of fear and ick. Fun!

3.What do you think makes a book a page turner?


I don’t think there’s one answer to this question.  There are so many, in fact, that it’s making my head spin!  Believable (and lovable, on some level) characters, a twisty plot, a good mystery…  And, also important, a heck of a good core idea that’ll keep readers riveted well into the night.

4.Great answer.  What advice would you give aspiring writers?


Write.  Keep writing. Get better at it. Don’t get discouraged, don’t buy into your own legend.

5.Again, a good answer.  What are your future goals as a writer?


To write more! And better!  To meet more cool people, and to enjoy the journey!


Thanks for welcoming me on your blog!

You're very welcome. Come back anytime.  And now let's have a blurb and excerpt from Destiny's Fall.

BLURB:
A broken tradition. A hunted child. A rebellion that threatens to topple the very fabric of the universe.

When Layela Delamores gives birth to her first child, the ether immediately rejects what should be its only heir. A wave of destruction sweeps the ether races and sparks Solaria’s ire and rebellion on Mirial. A new heir rises to take the throne of Mirial, one who wields tainted ether.

Unable to access the flow of ether, Layela is left with little choice but to flee Mirial, seeking answers that may no longer exist, prepared to sacrifice everything to free herself and her daughter from the clutches of the First Star.

“Gun the engines, get us out!”

“Solariers are telling us to stand down,” said Jaru, her systems analyst.

“And I’m saying the docks need redecorating. Gun the engines!”

The two moved quickly to obey her order. The engines churned to life, the scent of rotten cabbage pumping through the entire ship. The ship jerked once and the engine popped, and her hull vibrated, resonating in Avienne’s skull.

“Come on, you useless piece of crap!” She kicked the tactical controls and half the panel lights blinked out.

“Blood and bones, I need to steal a better ship!” The engines sputtered and the ship stopped vibrating.

“Engines online, Captain!” Jaru screamed. Avienne whooped and switched the viewport on. The entire metal structure of the docks buckled as they pulled free without first de-clamping, ripping great chunks of metal. The Dessicate’s engines kicked in full blast, throwing Avienne back into her seat. The docks swayed for a moment when the engine’s jet of hot hair struck them, then buckled sideways, and seemed to be righting themselves before suddenly collapsing in a heap of smoke and metal, dragging a few of the smaller ships down.

Avienne hissed. That made a nice, round ten worlds on which she would no longer be welcome. She was running out of planets to do business on.

“Where to, Captain?” Larod asked from navigations.

“Mirial. I believe it’s time to pay my brother a visit.” 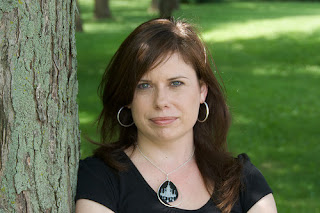 Marie Bilodeau is an Ottawa-based science-fiction and fantasy author. Her space fantasy novel, Destiny’s Blood, was a finalist in the Aurora Awards and won the Bronze Medal for Science-Fiction in the Foreword Book Awards. She is also the author of the Heirs of a Broken Land, a fantasy trilogy described as “fresh and exciting” by Robert J. Sawyer, Hugo award-winning author of WAKE. Her short stories have appeared in several magazines and anthologies, including the recent When the Hero Comes Home, edited by Ed Greenwood and Gabrielle Harbowy.

Marie is also a professional storyteller who’s told adaptations of fairy tales and myths, as well as original stories, in venues across Canada. More at www.mariebilodeau.com.

Thank you for hosting Marie today.

Thanks for hosting me today!

I can't quite understand the plot of the story, but there certainly seems to be a lot of action.

This is certainly an intriguing tour. I came across it today and am enjoying the posts. Thank you for sharing with us today.
dz59001[at]gmail[dot]com