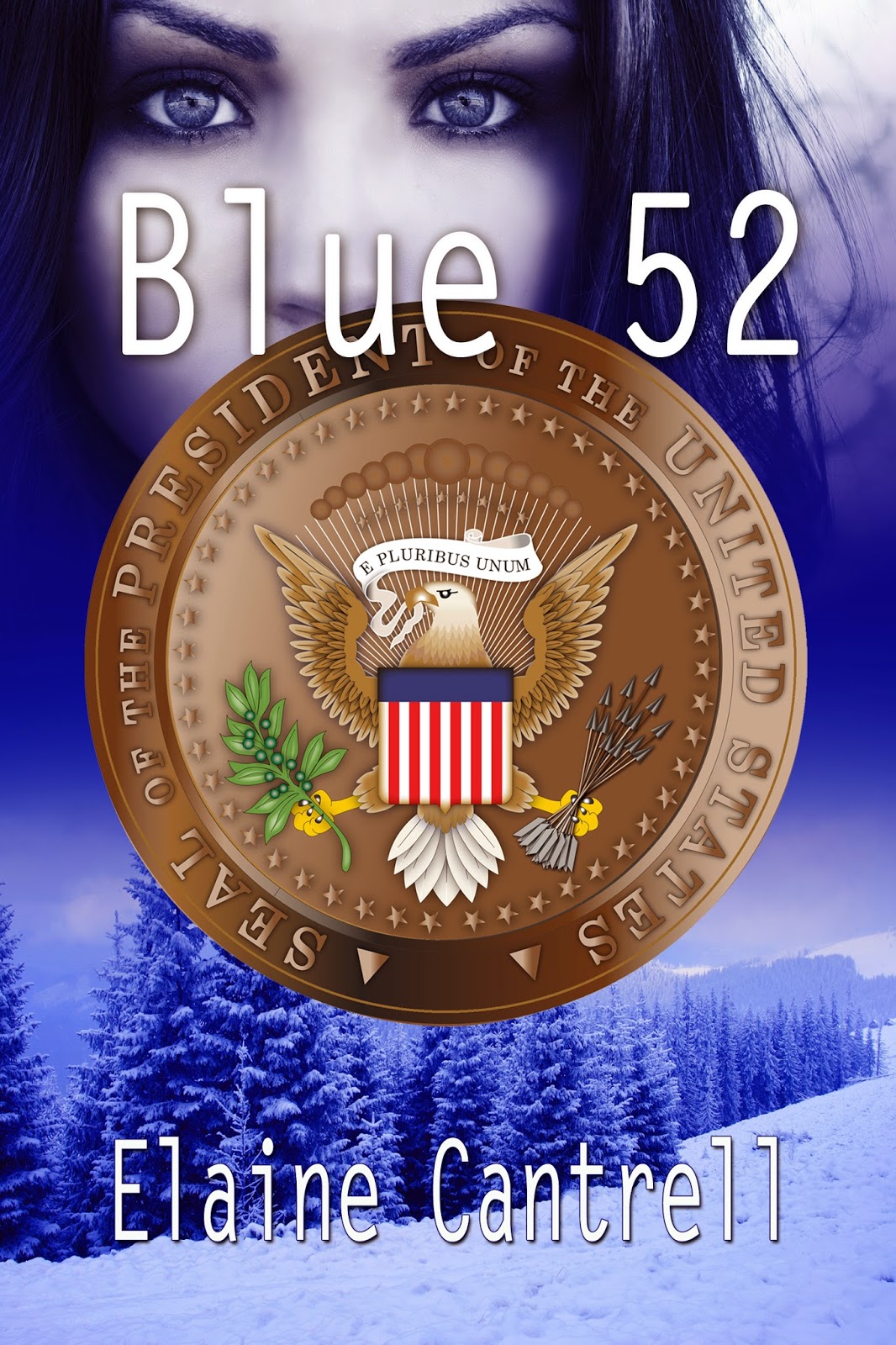 "This book is a sequel to Ms. Cantrell's Return Engagement. Set in the near future, it was cool to see how things were mostly the same, but with a few differences (I don't like driving much, so I really liked the idea of the futuristic cars!; not so much the picture phones.. ). One thing it also shows though is that people don't much change and family matters."  It's Raining Books.

Isn't that a nice thing to say? I'm Kathryn Sinclair, Elaine's heroine in Blue 52. Here's a scene from the book describing futuristic elements.

“Leave me alone,” Kathryn mumbled, but the phone didn’t pay any attention to her.  It just kept ringing like crazy.  “Oh, all right!” she cried.  She grabbed the darn thing from the bedside table and made sure she turned the picture and hologram feature off.  I don’t want the whole world to see me in bed all bleary eyed with my hair standing on end.


“Have you seen the news this morning?” he asked, ignoring her greeting.


She heard a big sigh on the other end of the conversation.  “Kathryn, I told you to stay away from Hank Lovinggood.  What were you trying to do, seduce him?  That’s no way to get him involved in Double T.”


“It isn’t what you think,” Kathryn cried.  She explained to Curtis how her meeting with Hank had come about, deciding that honesty didn’t obligate her to tell him she had visited the Lovinggood mansion.  I’ll confess if he asks me a straight question, but I hope he never finds out.


“I don’t guess you had much choice,” Curtis admitted.  “If you had refused it would’ve looked bad.  So, did Lovinggood mention anything about Double T?”


“Not really, but he still thinks I’m crazy.”


Curtis sighed.  “Okay.  I’ll call his grandfather on Monday and try to talk to him.  I’ll see you then.”


Kathryn wanted to go back to sleep she couldn’t.  Most laypeople probably did think time travel was nothing more than a fairy tale, but as a trained scientist she knew better.  Chaos theory notwithstanding, I know that mathematical principals shape the universe.  If you do your equations right, only your technology limits you, and I’ve worked that out beautifully.  At best, I offer the Lovinggoods a lifetime with their loved ones.  At worst, they might find and punish the people who killed Hank’s parents.


Yes, accidents can happen, but some things in life are worth a risk.  I mistakenly thought Hank would feel the same way.  If only the Lovinggoods would cooperate with us!  They might have an idea who killed the president and his wife, so they could use their time in the past far more effectively than I can.  They’d have a better chance of getting in to see the president too.  You can’t just walk up to the door of the Oval Office and expect the president to see you.


Might as well forget about it until Monday.  She had some Christmas shopping to do.

And coincidentally, who do you think I met while I was out shopping? Yep, Hank Lovinggood.


Thirty years later Hank Lovinggood embarks on a quest to prove his mother's innocence and punish the killers who took his family from him.  Together Hank and lovely physicist Kathryn Sinclair confront an implacable, twisted, merciless enemy who'll do whatever it takes to hide the truth forever. ﻿