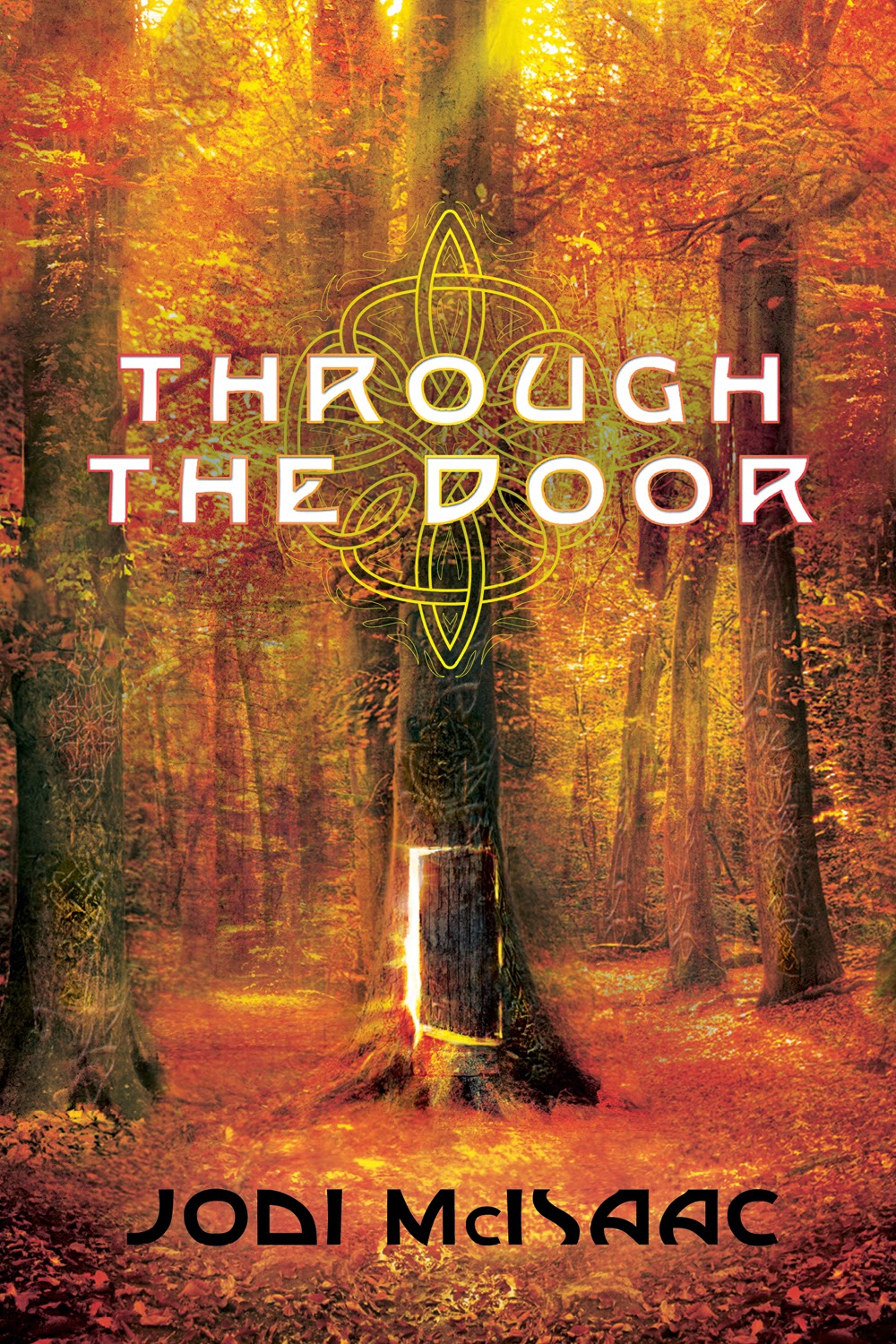 It’s been seven years since the love of Cedar McLeod’s life left with no forwarding address. All she has left of him are heart-wrenching memories of happier times and a beautiful six-year-old daughter, Eden. Then, one day, Eden opens her bedroom door and unwittingly creates a portal that leads to anywhere she imagines.

But they’re not the only ones who know of Eden’s gift, and soon the child mysteriously vanishes.

Desperate for answers, Cedar digs into the past and finds herself thrust into a magical world of Celtic myths, fantastical creatures, and bloody rivalries. Teaming up with the unlikeliest of allies, Cedar must bridge the gap between two worlds and hold tight to the love in her heart…or lose everything to an ancient evil.

The first in the Thin Veil series, Through the Door is a pulse-pounding adventure that takes readers across the globe and deep into the hidden realms of Celtic lore. 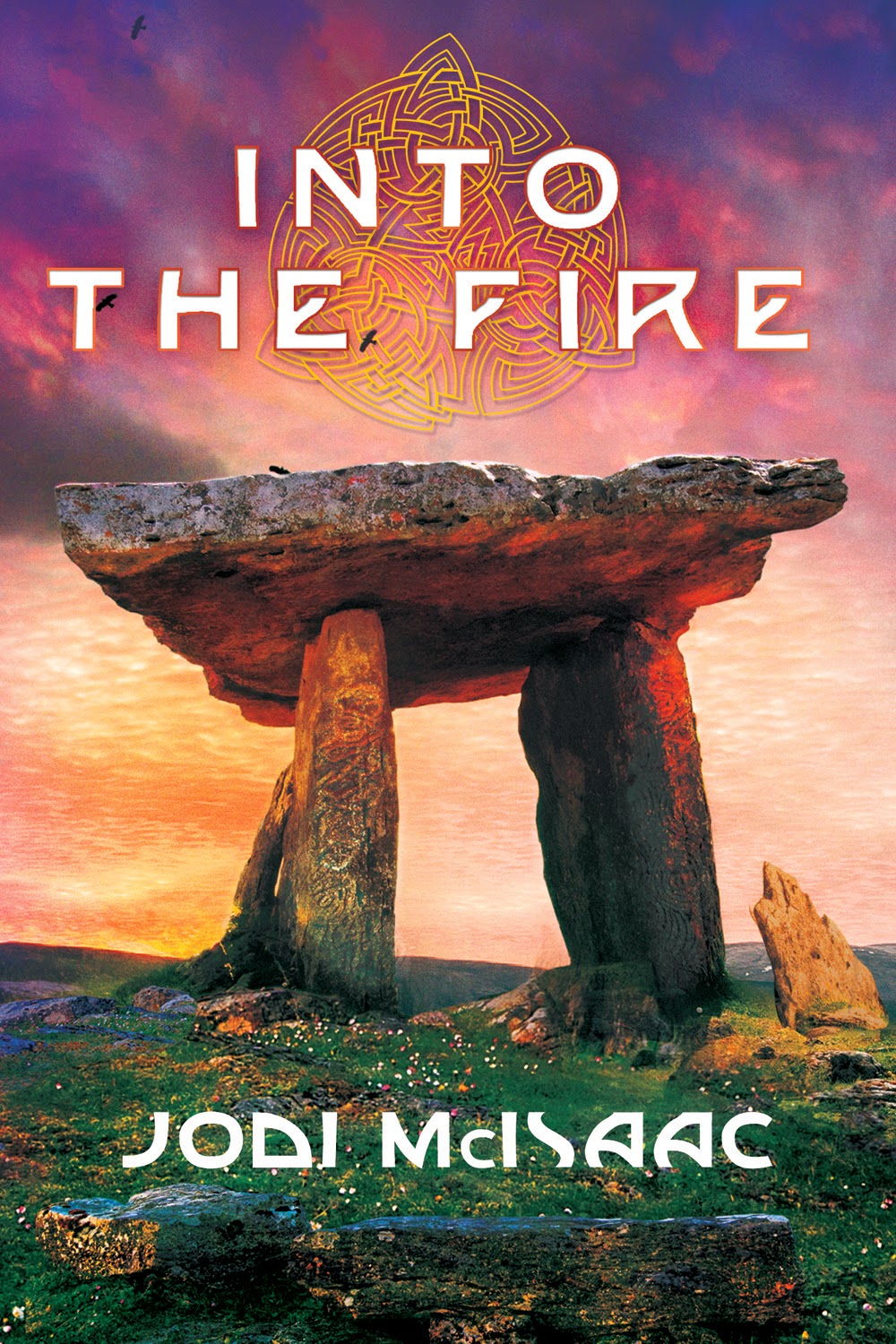 Cedar McLeod would like nothing more than to return to Tír na nÓg, help rebuild the mythical kingdom, and start a new life for herself and her daughter, Eden. But peace isn’t what Cedar finds after being reunited with her little girl.

Nuala—who kidnapped and terrorized Eden in her previous bid for power—has returned and is making a persuasive claim for the vacant throne. The devastation such a ruler would bring upon both the kingdom and the human world is unthinkable. With no one else to stake a convincing counter-claim, Cedar steps forward...but first she must prove her worth beyond a doubt.

Her opportunity comes when she is charged with finding an ancient treasure, the Stone of Destiny, and returning it to its rightful home. It is a quest that will lead her to question her beliefs, and push her loyalties to their limits. If she succeeds, Cedar could grant her new world and her new family a chance to flourish again. If not...destruction may be the only path ahead.

Into the Fire, the second book in the Thin Veil series, is a captivating blend of Celtic myth, mystery, and adventure that delves deeper into the ancient world first explored in Through the Door. 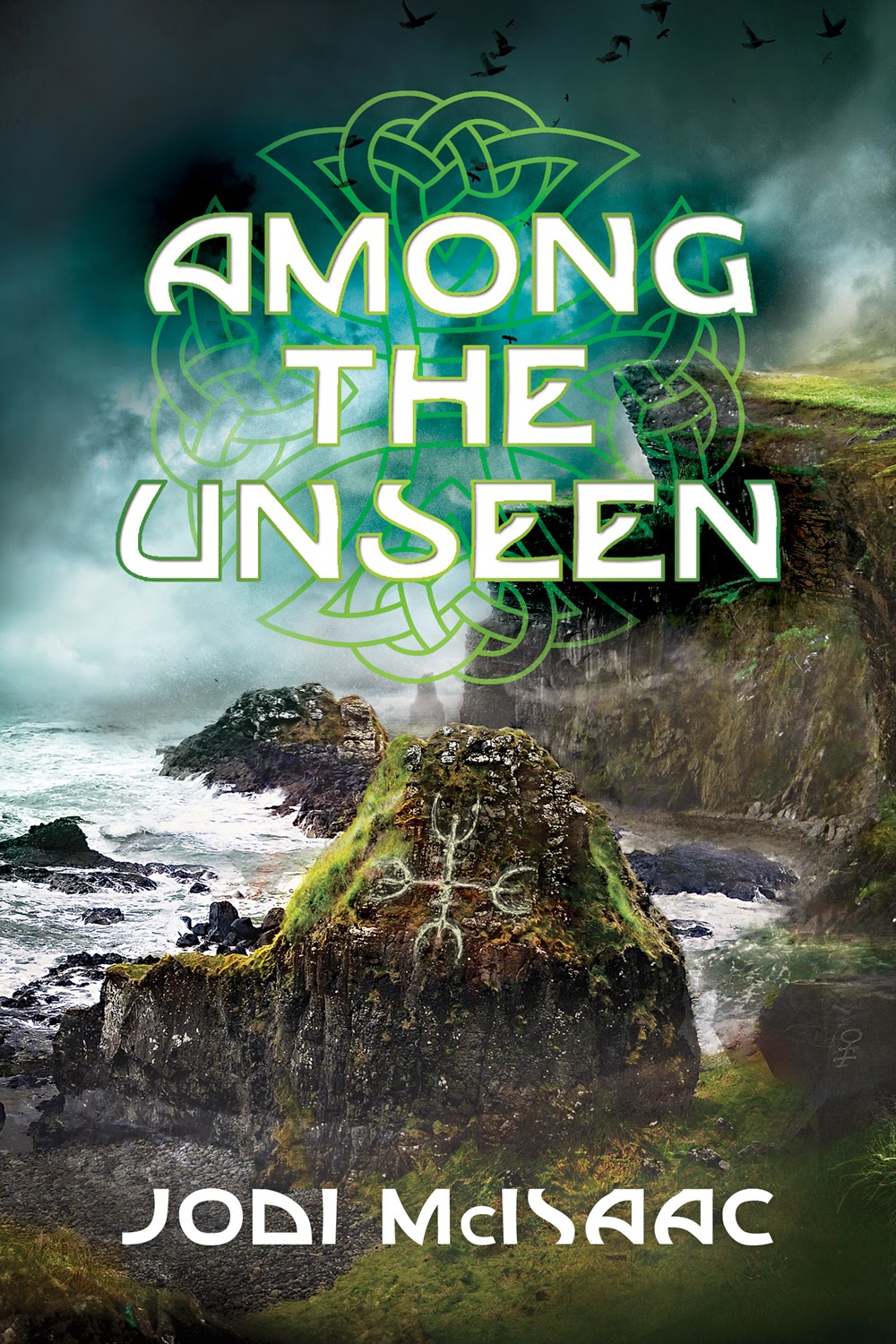 Life just keeps getting more complicated for Cedar McLeod. As the recently crowned queen of Tír na nÓg, she’s trying to understand her magical new kingdom, even as she misses her life back on Earth. It doesn’t help that a dear friend has just betrayed her—a betrayal that almost cost Cedar and her family their lives. And things aren’t easy at home, either, as Cedar’s seven-year-old daughter, Eden, lost and lonely in Tír na nÓg despite her special powers, has become painfully distant.

Cedar vows to do whatever it takes to protect her family once and for all, and starts rounding up those who plotted against her. But then a new disaster breaks out: a mysterious sickness is plaguing the Unseen, Ireland’s magical creatures, including those Cedar knows and loves. With enemies still on the loose and not knowing whom she can trust, Cedar must race against time to reverse an ancient curse, in a journey that will take her from Tír na nÓg to Earth…and beyond.


She felt certain that if she could only get inside Maeve’s private sanctuary, all of her questions would be answered.

She placed her hand on the rough wood of the door. “Open,” she whispered, feeling foolish. She glanced over at the tree under which the women were buried, then turned back to the door. “Mum?” she whispered. “It’s okay now. You can let me in. Let me in.” Nothing happened.

Cedar kicked at the door in frustration, and the wood creaked. Encouraged, she kicked it again. Then she took several steps back and flung herself shoulder-first into the door.
She was not expecting the explosion. A loud crack like a rifle shot ruptured the silence of the evening, and a force like a hot wind sent Cedar flying backward through the air. She landed hard on the gravel driveway amid a torrent of red sparks. Her head hit something hard, and she felt the darkness close in on her.

When she opened her eyes again, something was obscuring her view. She could see a rim of light in her peripheral vision. It surrounded the object in front of her like a halo. She recognized it as the porch light. The sky was black; night had fallen. She started to sit up and winced as a sudden burst of pain shot through her head.

She felt herself being gently lifted into a sitting position. The world swam around her, and she closed her eyes, waiting for the pain in her head to subside. After a moment she opened her eyes again and blinked a few times. Gradually, the object in front of her came into focus. It was a man. He was kneeling beside her, his light gray eyes fixed on her with concern. He was handsome, though old enough to be her father. His shaggy brown hair was generously flecked with gray, his long face was lined and pale, and he was wearing a worn brown leather jacket over beige pants and a buttoned shirt. Behind him, the workshop looked as intact and impenetrable as always, despite the blast that had knocked Cedar off her feet. 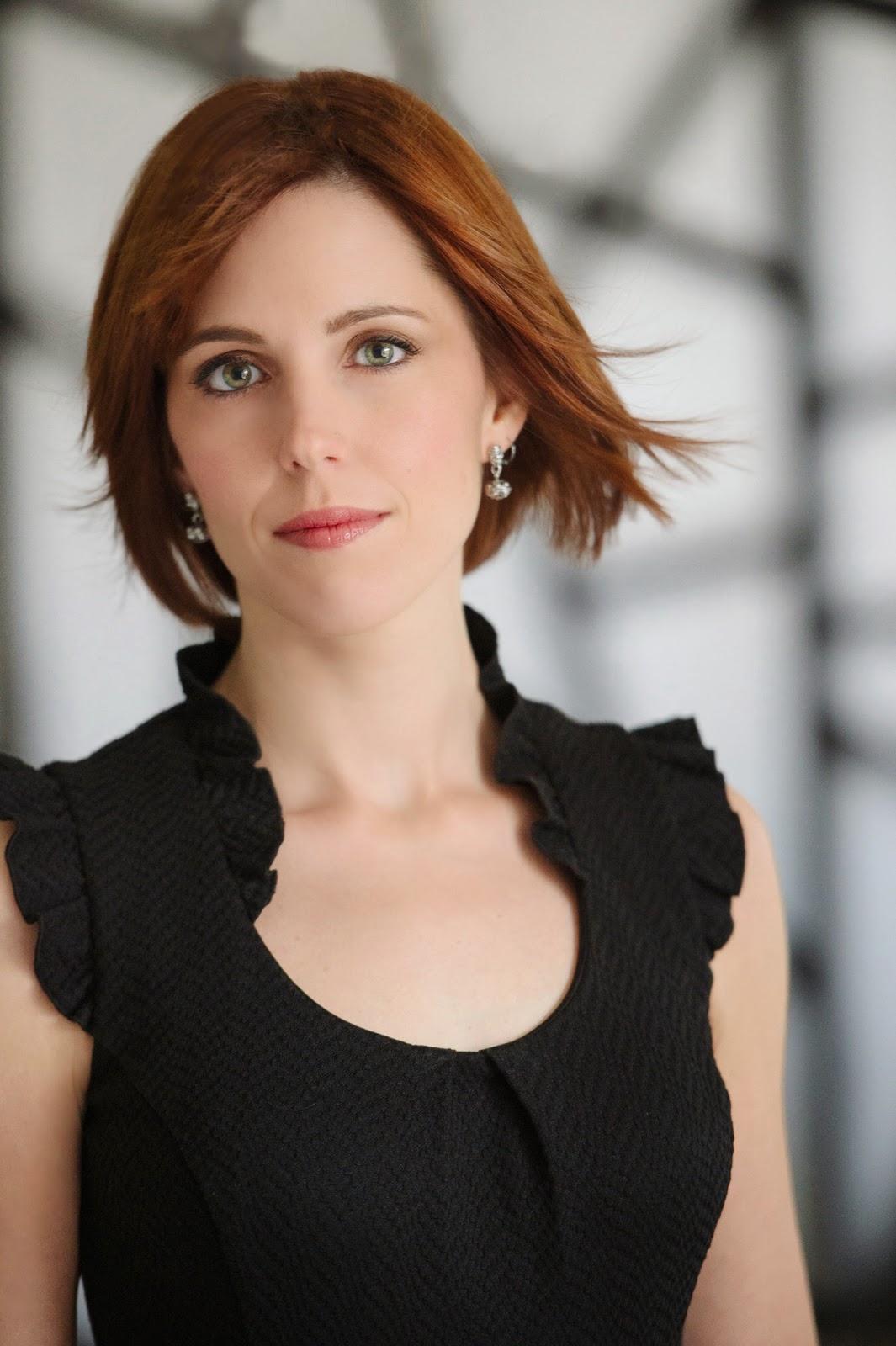 Jodi McIsaac grew up in New Brunswick, Canada. After stints as a short-track speed skater, a speechwriter, and fundraising and marketing executive in the nonprofit sector, she started a boutique copywriting agency and began writing novels in the wee hours of the morning. She currently lives with her husband and children in Calgary.


The Thin Veil Series on Amazon: http://www.amazon.com/Jodi-McIsaac/e/B0082T2DO2/
Win signed print copies of all three books in the Thin Veil series – A Rafflecopter Giveaway

You can find the author's schedule at  http://goddessfishpromotions.blogspot.com/2014/04/blurb-blitz-thin-veil-series-by-jodi.html
Posted by Elaine Cantrell at 2:00 AM

Thanks for sharing bits about each of your books

The #1 thing I look for in a book is a good story. There's no sense in reading it if you can't follow the story. Thank you for the opportunity! :)