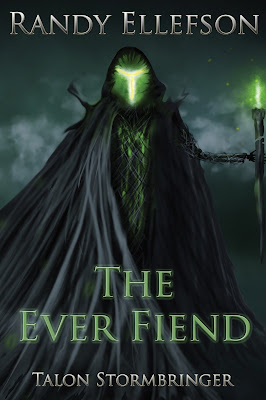 The Ever Fiend
by Randy Ellefson

Only a fool steals from a wizard.

Talon Stormbringer thought he knew the risk of stealing from Viland Shadowbreaker - until he got caught. The wizard will spare him if Talon performs a service - fetch the deadly silver elixir from the Everway, a supernatural land that Talon assumed wasn’t real. Only children believe the stories about what lies within - lost souls, corrupted magic items, and mysterious destinations that most people never escape. Ruling over it all is the Ever Fiend, a bogeyman that people use to scare unruly youngsters into behaving.

Talon agrees to go, if only to stop Viland from doing something unholy with the potent elixir once retrieved. Joining him are a band of people he can’t trust. Their leader, a sorelia with nefarious plans of his own. The sorelia’s battle-trained mynx, a large cat who obeys only its master. An alluring swordswoman who wants to enchant her blades with the elixir. A cocky guard whose bravado might prove more liability than asset. A warrior kryll whose curiosity about the elixir might cost him more than his life. And a tortured Knight of Coiryn who seeks redemption in a place where most are damned. Of all the things they might discover on their journey, one is the most obvious and yet the hardest to learn...

While most in Talendor slumbered, Talon Stormbringer crept through a hallway dark with flickering shadows, his human ears and eyes alert. He’d already slipped undetected past a jhaikan and a mynx, undeterred by their ferocity and taste for man-flesh. Even the dozen sleeping riven in the courtyard hadn’t given him pause, when even fully armored knights would have turned away. The little monsters were infamous for stirring at the slightest sound and waking to become like a whirling dervish of steel, not unlike what Talon himself could unleash from the sword he gripped in one hand.

Now he heard nothing, not even his own passage, the supple black leather pants and tunic he wore never squeaking as he crept toward the doorway and his prize—the gold figurine of a great bird of prey, said to be magical and worth a fortune. Stories in taverns had piqued his interest but also warned him of the dangers, the greatest of those being the wizard whose white tower he now prowled. Some said Viland Shadowbreaker enjoyed unsavory habits when few were looking, his public persona of benevolent charm masking a dark truth. But men with great secrets often hide things of greater importance than their private sins.

Randy Ellefson has written fantasy fiction since his teens and is an avid world builder, having spent three decades creating Llurien, which has its own website. He has a Bachelor’s of Music in classical guitar but has always been more of a rocker, having released several albums and earned endorsements from music companies. He’s a professional software developer and runs a consulting firm in the Washington D.C. suburbs. He’s married and loves spending time with his son and daughter when not writing, making music, or playing golf.

Randy will be awarding a $10 Amazon or B/N GC to a randomly drawn winner via rafflecopter during the tour. Use the link below to enter.

Email ThisBlogThis!Share to TwitterShare to FacebookShare to Pinterest
Labels: Fantasy, Randy Ellefson, The Ever Fiend

Thank you for posting about my book today! I'll try to answer any questions your readers have. I have one for them - Do you like a fantasy world with all new races or is that a turn off? THE EVER FIEND has a bunch of new ones. Randy Ellefson