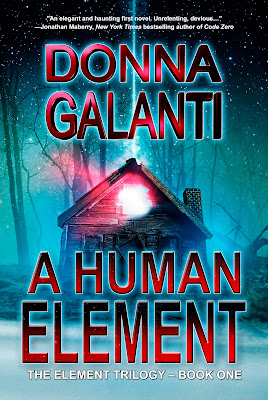 A Human Element
by Donna Galanti

Evil comes in many forms…

One by one, Laura Armstrong’s friends and adoptive family members are being murdered, and despite her unique healing powers, she can do nothing to stop it. The savage killer haunts her dreams, tormenting her with the promise that she is next. Determined to find the killer, she follows her visions to the site of a crashed meteorite in her hometown. There, she meets Ben Fieldstone, who seeks answers about his parents’ death the night the meteorite struck. In a race to stop a madman, they unravel a frightening secret that binds them together. But the killer’s desire to destroy Laura face-to-face leads to a showdown that puts Laura and Ben’s emotional relationship and Laura’s pure spirit to the test. With the killer closing in, Laura discovers her destiny is linked to his, and she has two choices—redeem him or kill him.

The man could hear the child's bellowing cries coming from underneath the blanket covering it. She pushed the child into his arms as if eager to be rid of it. He took the bundle and handed the nurse his packages. The nurse began to close the door when he heard another far away cry.

The man wedged his foot in the door. "What was that?"

"N-Nothing." The nurse looked up.

The man risked looking her in the eye.

"The girl is in pain and won't keep quiet." She clutched the envelope and folded her arms across her sagging bosom.

"It's just the whimpering slut. Now she's paid double for what she's done." The nurse took a step back as if aware she had said too much already. She glared at him. "Now go on. You have what you wanted. And so do I." She shut the door in his face.

The man in black stood there for a long moment, considering the woman's choice of words. What if another child had been delivered and the frigid woman and country doctor kept it secret?

He decided to keep this information to himself. He would find the opportune time to use it. He was a patient man. But first, he had to see for himself. He peeled back the child's bunting and looked for the first time into its yellow eyes. For that moment, the baby fell silent.

The baby resumed its wailing.

The man turned with his noisy package and melted into the darkness satisfied, as the doctor had been, that the night's events had provided him with more than he had asked for. 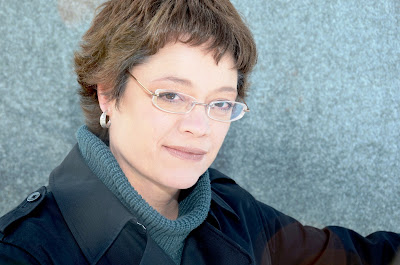 Donna Galanti is the author of the paranormal suspense Element Trilogy (Imajin Books -http://www.imajinbooks.com/ )  and the children’s fantasy adventure Joshua and The Lightning Road series (Month9Books -http://www.month9books.com/ ). Donna is a contributing editor for International Thriller Writers the Big Thrill (http://www.thebigthrill.org/) - magazine and blogs with other middle grade authors at Project Middle Grade Mayhem (http://project-middle-grade-mayhem.blogspot.com/search/label/Donna Galanti) . She’s lived from England as a child, to Hawaii as a U.S. Navy photographer. Donna enjoys teaching at conferences on the writing craft and marketing and also presenting as a guest author at elementary and middle schools.

Purchase books 1 and 2 in the Element Trilogy:
http://mybook.to/AHumanElement

Donna will be awarding a $15 Amazon or B/N GC to a randomly drawn winner via rafflecopter during the tour. Use the link below to enter.
a Rafflecopter giveaway

Thanks so much for having me on with A Human Element! I really appreciate it. PLUS it's on sale all this week for just $0.99cents. Happy reading all!