A Different Kind of Fire & Fury 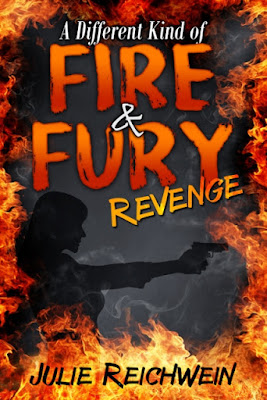 A Different Kind of Fire & Fury: Revenge
by Julie Reichwein

BLURB:
Detective Michelle Velasquez kicks ass with the Santa Fe Police Department, and she’ll need all her moxie May, 2013 as she’s assigned two cases which may be related. She’s assigned a vicious rape case of Maria Acevedo, an intern with the Jones Financial Group, as she gets a call from an old friend, Richard Stanberry III. He’s intent on re-connecting, but she’s suspicious of his motives for good reason.

As she digs into Maria Acevedo’s rape case, she’s assigned a thirty year old murder case of her former friend, Susie Murphy, who happened to be Richard Stanberry III’s girlfriend at the time of her murder. If Detective Velasquez wants to solve both cases, she’s going to have to put her life on the line to uncover some dark secrets that some prefer to stay buried.

It was the 21st century, but she cowered naked on the floor as the man in the ivory tower hadn’t signed on to equality in the workplace. #MeToo It was the age of female empowerment, but the big man in the office wanted her, in kitten heels, as he walked through her door. It was
the age of feminism but to him it meant she hated men. For the man filled with hate, the new age woman fueled his anger as he justified his vile actions. The man forgot the golden rule; sometimes women hit back. Because you resided in a gated community, it didn’t mean she
wouldn’t come after you. If you’d been more concerned about revenge, you might have controlled your actions. Since revenge never crossed your mind, you imposed pain only to learn that it didn’t heal what ailed you, so it was time for justice to even the scales or revenge would.
All women deserved a dignified and respectful workplace, and I had a new victim who wouldn’t further her career by getting down on her knees.

They sent me to the Jones Financial offices, on Calle Mejia Street, after housekeeping called about an assault. I’d been drawn to Police work, because I loved to discover secrets, since I was young. How were puppies made? Could Santa Claus visit every day? These questions
changed as I grew up and became a Detective. Do you feel better after you murdered her? Did you look in her eyes and let her know what awful act she’d done to deserve the final humiliation? I’d like to understand what happened, so can you tell me?

I'm a debut author who has long had an interest in crime thrillers and an interest in criminal psychology, specifically, sexual assault. I was stalked two times in my 20's and had to relocate both times as I barely escaped rape both times. I used those experiences in creating one of my fictional characters in the book.
I'm an avid outdoor enthusiast and a lover of animals. I own 5 dogs and have horses, too. They're my babies.

Julie will be awarding a $75 Amazon GC, and another Amazon GC for $50, to two randomly drawn winners via rafflecopter during the tour.