The Solidity of Us 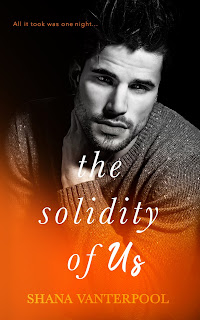 Beauty that close mixed with such turmoil was a cocktail of enriched poison—I wanted to drink it anyway…
Things with Cade didn’t start that way. They weren’t that easy, and they weren’t that smooth, but I assure you, some of the best love stories didn’t start out with ease and without bumps. How can anything that’s solid be simple? Cade and I both needed a solid ground. We’d earned it.
This is the story of how I, Bray Gideon, Los Angeles transplant, lost soul, ran away to her mother’s hometown of Well Water, Kentucky, and discovered how love could heal the wounds of the past and strengthen the hope of my future.
This is the story of Cade Montgomery, a man who’d ran for so long all it took was one night with the right woman to set his demons free. And boy, did those demons hurt. They got in the way and they held his happiness over his head and mocked his scars.
Those demons took as much as they ruined.
But love was stronger.
It was greater.
Love was… solid.

I rolled over in bed and stared at my coffee candle. My room smelled of the rich, dark liquid I missed so much. Reminded me of the man I missed for no other reason than because when Cade wasn’t there, something felt like it was missing.
I heard his car door close around midnight. I waited a beat and then got up, tiptoeing down the hall and around the back to listen near my grandparent’s door. Two sets of snoring resonated from the other side. Relieved, I continued tiptoeing until I’d gotten my shoes on and the front door open. On the other side of the screen door, I spotted Cade sitting under the dogwood tree in my grandparent’s front lawn.
It was dark, but the moon was bright, and the summer heat still radiated off the hood of his Lexus parked on the curb. The scent of the perennials in the garden out front were thick and floral, warmed all day by the sun. The street was quiet, making the sounds of the cicadas nearby deafening.
I carefully stepped out of the screen door and shut both behind me. I crossed my arms over my chest and walked down to the dogwood tree.
“My mother used to say that hearing a cicada in the summer was good luck,” he announced, his voice low. “They mean you’re about to get a second chance.” He watched me. “Can’t be a coincidence.”
I hugged myself; I didn’t know what to say.
He nodded to himself. “Okay, you don’t want to talk, then can you please listen?”
I shifted from foot to foot, hugging myself tighter. Squeezing my tears tight in case they escaped. If one escaped, many more would follow. And I’d be on my knees under the dogwood tree. Begging him for so much, I didn’t know where to even begin. “Yes.”
He took a deep breath in preparation, and then Cade Montgomery laid it all out on the line. “I did not and will not bail out my father. He’ll sit in jail until his sentencing and then he’ll sit in there for years for what he did to you. And you know what? I’m so damn relieved.” Tears burst through his eyes. “I’m relieved that he’ll be in jail. For the first time in my life I won’t have to worry about him. I feel free in a messed-up way. But in others, I feel more lost than ever before. I don’t know how to say I’m sorry, how to convey how bad I feel for leaving you with him. For the hurt and worry and pain you endured. I’m sorry I was an asshole when we met. I’m sorry I continued to be an asshole. I’m sorry that I was afraid and took it out on you.” He took an uneven, ragged breath. “I gave my ex-wife what she wanted. Half of everything and she signed the divorce papers two nights ago. I’m officially divorced and she’s out of my life. I settled with the network and they’re paying out my contract. I don’t have a job, but I’ll have the money to take the time to find a new one and the money to take care of you and the baby. I hired a realtor to sell my father’s property and she already found someone interested in the almond groves. I did everything I could.” He pushed to his feet and since the roots of the tree were higher and gnarled, they gave him an advantage over me. “Here’s what I want. I want you to move in with me into the goldenrod house. I want a second chance. To be everything you wanted and deserved from the beginning. I was so caught up in everything falling down around me, I thought you were one more hammer falling. But you weren’t. You were a gift, and I was terrified of ruining a gift that was so perfect for me I couldn’t have asked for anything else if I’d known myself well enough to ask. I want this baby more than I’ve ever wanted anything. I want you and I want us. But I know you need time. I know you blame me for a lot, and you’re right to blame me. I messed up. Move in with me and give us both what we want. A second chance.”
Oh, hell.
Could he be any more transparent?
My heart was tattered and torn, eager to feel and accept the balm of his words.
I wasn’t like my mother. I wanted what she detested. I wanted security, normalness, and solid ground. She ran from Well Water and I ran to Well Water. In a moment where she would say no, I found myself saying, “Yes.” 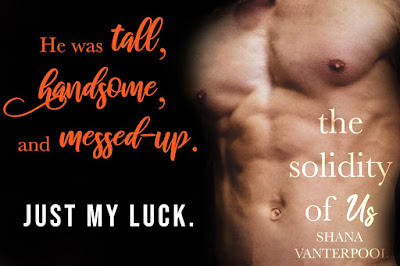 Romance author, coffee drinker, and bad boy aficionado. Every second not spent breathing is an opportunity to write and read. I live in Northern California with my family and actress dog, Halle Bella. (Just Bella when she decides to cut the crap.) Escaping with a good book is something I live for and I write so others can do the same. 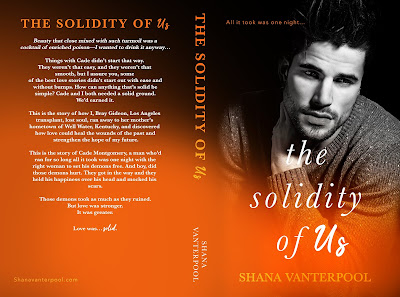 Email ThisBlogThis!Share to TwitterShare to FacebookShare to Pinterest
Labels: contemporary romance, Shana Vanterpool, The Solidity of Us