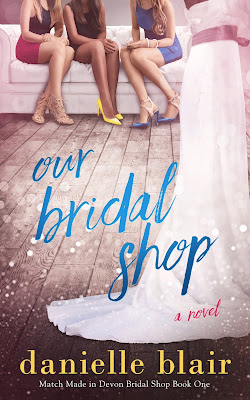 Our Bridal Shop
by Danielle Blaire

Every family has its secrets, and the March family is no exception.

For the March sisters, Match Made in Devon, the bridal shop opened and run by their parents, was a real-world representation of what true love was all about. But for eldest sister Alexandra that kind of perfection has always seemed unreachable.

Alex has spent over fifteen years in Boston, building up an impenetrable shell of confidence and taking control over her own destiny. If there’s anything missing from her life, it isn’t important anyway. But with her mother’s unexpected death Alex is forced to leave her life in the big city behind and return to her hometown of Devon…and a past she’s been running from for years.

As the March sisters try to salvage the bridal shop their parents loved, Alex is forced to confront her painful past and the real reason she left Devon so many years ago…including childhood sweetheart Jonah Dufort.

Alex’s entire body went cold; a naked, exposed kind of cold, though she was firmly planted in Clement Grant’s stylized version of purgatory, her feet stretching roots into his patterned rug. Big Auntie’s photo blurred. At the window, Daddy turned away.
“She wanted you three to become acquainted,” Grant offered lamely, to fill the room with something, anything.

Blood vessels at Alex’s eardrum magnified her pulse. She pressed the heels of her palms to her forehead to counter the pressure building behind her skull.

“After she was gone.” Perfect.
“I believe the letters should explain.”

Explain how a man could leave his wife, his two young daughters on an iron balcony in mid-November, and bed another woman?

Alex looked at the window. Elias March was gone.

She stood, stormed the window, to breathe where he had lingered, to understand. White stars veiled her vision—flakes beyond the panes of glass or a by-product of the heaviness between her ears—she couldn’t be sure. Alex wanted to yank at bulky book bindings, send them tumbling off the shelves onto Clement Grant and the letters and this perfect woman who seemed an absolute glacier in the face of news that threatened to bury Alex. As fast as the temptation took hold and the vision stretched to its satisfying but imperfect conclusion, the pain in Alex’s head subsided. The first rule of solving the unsolvable was to have a plan. All pieces showing. Know what you have.

Alex turned to the woman. “Where are you from?”

“Who is your mother?”

Freesia looked at Grant. “Do I have to answer?”

Grant stood, hands spread as if to catch himself, the situation, from tumbling headlong into something messy.

“Alex, the letter…” Charlotte’s turn at dialing back everything.

“Screw the letter, Charlotte. I want to hear it from her.”

Freesia gathered up her bag, fit it cross-ways along her long torso, and aimed for the door. Even in exit, she moved scripted, magnificent.

“Alex! What’s gotten into you?”

“Tell her, Miss Day. Tell her because she doesn’t get it. Grief clouds her some days so much she can’t see what’s in front of her.” Alex was shouting now, her words punctuated by the open office door kicking back against the wall, the tearing of paper as Charlotte ripped into her envelope. “Tell her this out de way circumstance. How Daddy drove his truck away and forgot us all.”

Freesia stopped in the next room, a waiting room filled with gurgling fountains and liquid jazz designed to make people feel better about their lives falling apart in the eyes of the law. She turned in profile. Her chin trembled.

Charlotte looked up from her letter. Soundlessly, she navigated chairs pushed back in chaos, Alex’s flawed stance. Charlotte’s sensible shoes squeaked damp against the waiting room tile. Alex’s baby sister, ill-prepared for what the world outside Devon brought her, pulled Freesia Day into the warmest of summer-like embraces, her letter from Daddy loose and forgotten in her hand.

Our Bridal Shop begins shortly after the death of Alexandra and Charlotte March's mother. Alex has left the big city to come home and help her sister sell the family business, a failing bridal shop. At the reading of the will a long held secret is exposed and sets the stage for a lot of conflict and growth especially in Alex who has always striven to control every aspect of her life and be perfect.

I thought the plot of the book is very good. It showed life and all its complications and mistakes. The characters were all well drawn, including the secondary cast who helped to project a sense of time and place to the book. The book focuses on Alex who at first is anything but a sympathetic, likable character, but don't worry. As I said before, Alex is going to do a lot of growing and changing in order to escape the bindings of the past.

Danielle Blair escaped the slog of her former accounting job to instead pursue writing women’s fiction. She pens empowering stories about women, for women, that focus on a woman’s unique journey to find her place in the modern world.

But this wasn’t always the case. Following a messy divorce, Danielle took to reading and writing to help sort out the whirlwind of emotions she was dealing with. What started as a coping mechanism turned into a passion and in 2017 she transitioned to writing full time. Along the winding journey to authorship she also met and married her current husband, who is the love of her life.

She writes her books with the help of her two sisters—Jennifer helps to plot out the stories, while Linda is the beady eye behind the editing of them. Since setting up the tire swing in their back yard together as kids, they’ve always worked better as a team—so why not write a book together?

She is the mother of two handsome adult sons, and three dogs that act like children (but she loves them anyway). When not lost writing her next book, Danielle can be found outside digging in the dirt, trying to coax her husband to just try yoga once, and cooking meals that may or may not end up burned every once and a while.

Danielle Blaire will be awarding a $10 Amazon or Barnes and Noble GC to a randomly drawn winner via rafflecopter during the tour.

Who is your favorite author? Bernie Wallace BWallace1980(at)hotmail(d0t)com

Have you ever read a book more than once? Bernie Wallace BWallace1980(at)hotmail(d0t)com