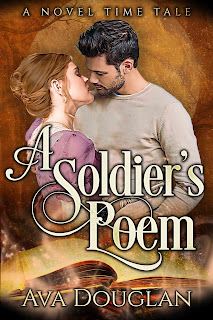 He’s devoted to days of old. But when a soldier from the past comes to life, will she capture his heart?
History professor Jack Ellison Wiles longs to make his mark on academia. But when his late uncle leaves him a book shop with “hidden treasure” inside, he’s stuck hunting it down before he can sell the store. Rummaging through piles of knickknacks, he nearly jumps out of his skin at the sudden appearance of a fiery woman aiming a Civil War musket.
Benetta Tolland hid in uniform to locate her brother, and discovers a new kinship among her fellow Union soldiers. But when she finds herself surrounded by books and facing an oddly dressed stranger, she demands he take her back to the battlefield. It’s only after Benetta sees the transformed frontline that she believes she’s traveled through time.
However, she insists on returning to her war to prevent stanzas of needless death. As Jack realizes the enchanting soldier is a figment of rhyme, he knows her poem ends with her death on the battlefield. Driven to uncover if Benetta is more than just ink on paper come to life, his firsthand research hits a snag when the couple begins to fall for each other.
Will Jack and Benetta find a way to make love stronger than fiction?
The Soldier’s Poem is a standalone story in the captivating A Novel Time Tale magical fantasy series. If you like time-travel romance, sizzling chemistry, and complex courtships, then you’ll adore Ava Douglan’s heartwarming tale. 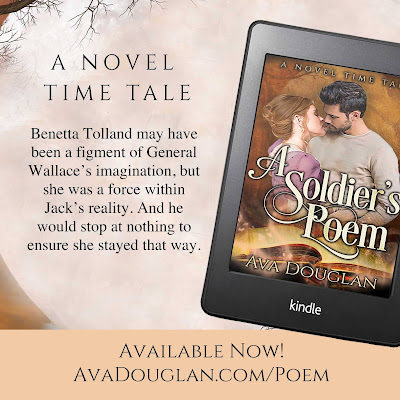 Some people are stayers. They move through rooms in slow motion, observe what comes next, find ways to echo in their spaces. Even their scent lingers, inhabiting the nooks and crannies of the everyday, until their essence chances a state of unwelcome. Uncle Charlie had been a stayer. Would have stayed an eternity had death not come. His touch remained on every book in The Literate Jester. The rare spice of vanilla pages and his favorite pipe tobacco on his clothes had not left Jack.
And then there were the goers. People who hunted the next thing to come. The impulsives who fled, instinct over thought, outpacing control, who dropped fast slivers of themselves in their wake for others to pick up and hold to the light in remembrance.
Benetta Tolland was a goer.
Jack knew this as surely as he knew the morning on the roof and the attempt in the bathroom mirror were part of her nature. And he blamed himself for everything that day, from the kiss that fogged his head and clobbered his pulse to speaking his deepest desire, a desire he had told no one. For Jack, going back to the time he was responsible for his parents’ death would mean he could move forward. He never imagined Benetta might think he wished her gone.
And yet, here he was. A stayer, forever chasing a goer.
He doubled over, a second and complete copy of Eve of Monocacy in hand, the push and pull of oxygen to the deepest parts of his diaphragm sated for the first time in nearly an hour. From between the pages of her poem, Jack pulled out Benetta’s hastily scrawled note and reread it by moonlight.
In the absence of her relentlessness emerged an elusive peace. Her father had told her as much. She didn’t understand, never saw it until hurt came and time ceased.
A line from the text, verbatim.
Benetta had stolen away in the night with nothing more than her uniform and haversack and the long rifle Jack had tipped against the bedroom corner. A measure of trust, returned. The gun was the first thing he looked for each time he awakened, for Benetta was nothing if not a warrior first. Guilty of nothing more than taking on his fight as if it were hers.
And tearing out the poem’s final page.
And hiding a second copy of her book—none too well, mind you—to conceal her fate.
A scratchy bed of crops at her back, a cloud chariot racing across the sky, Benetta Tolliver had died in the Thomas field.
As had a piece of Jack when he read it.
The bedside clock had read a few minutes past three. Now, at five, the beginning of a new day, the gray before the rising sun, Jack feared another ending.

Ava is Anna, Vivian, and Amelia. She’s an idea Anna had once upon a time–what if a group of amazing writers came together to create a series? Anna talked with Vivian who expanded on her concept. They brought in Amelia to round out the team.
Ava writes a blend of time travel, magical realism, contemporary, and historical romance. She blends them together to create a world of ‘what if’? What if a magical bookmark brought characters to life? Brought them from different time periods?
How would they react?
What if they all got their happily ever after?
Ava is all three of us and she loves hearing from fans of the Novel Time Tale series! You can reach Ava at avadouglan@gmail.com. 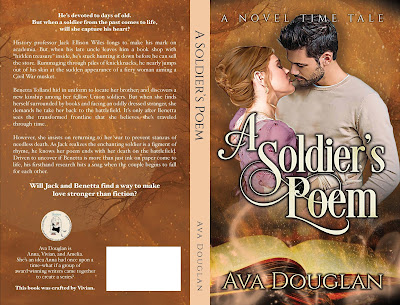