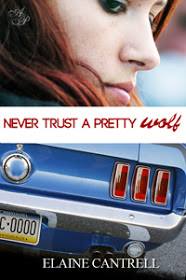 Welcome to Saturday Sample and Weekend Writing Warriors. Today we'll continue to share excerpts from Never Trust a Pretty Wolf. On Sunday when you finish here, do go to http://www.wewriwa.blogspot.com for more excerpts from a bunch of great authors.

Blurb:
Liesel Wolf has a secret, a dangerous secret she’ll go to any lengths to conceal. When she’s paired in a charity game with sexy marshal Andy Bryce, a man with secrets of his own, her carefully constructed world comes crashing down, and Liesel’s on a collision course with her past.

Last Week
If she cancelled, that odious Andy Bryce might nose around to find out why. Of all the men in the world, why did she end up with him as a partner? Her foot pressed marginally harder against the Mustang’s accelerator.

Oh, he looked great. She gave him that. She had always admired men like Bryce, who must be six‑foot-­three, at least, and had shoulders to die for. He was handsome in a rugged way with a tan that suggested he spent a lot of time outdoors. She also loved those blue eyes of his. They had sparkled with interest when he first saw her. But he was a marshal!

This week: We start with Liesel's POV and end in Andy's.
In his presence, old, unhappy memories scratched their way to the front of her mind, a totally unacceptable situation.

Truthfully, though, it didn’t matter what he did for a living. After learning the hard way that trusting a man brought nothing but unhappiness, she had promised herself she’d never fall into that trap again. A promise she intended to keep.

Chapter Two
Andy got out of Tony’s SUV, shouldering his bag as he squinted against the early morning sun. “You owe me one, Tony, and I won’t let you forget it.”

“Oh, quit griping. Once you get started Ms. Wolf’ll thaw a little, and you’ll have a great time.”

“Yeah, so you say,” Andy replied with a scowl.

He slammed the door and Tony took off, undoubtedly congratulating himself on evading the game.

I'm starting to believe that Andy got played. I hope he gets the last laugh when "Ms. Wolf" thaws out. :-)

The romance is not happening, sadly enough. But you never can tell.

I think Ms. Wolf may thaw, but it will be a very long time before she does, Andy's blue eyes not withstanding. She's got more than one issue that's not going away quickly. Great snippet!

So much for friends!

Enjoying the story, nice to have a little more of her back story to think about. Great snippet!

I'm enjoying this story--still trying to figure her out.

You've done a great job of ratcheting up the tension between them -- even before they've met!