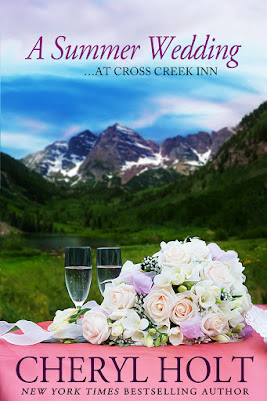 From New York Times bestselling author, Cheryl Holt, comes a sparkling, fast-paced novel about the complexity of family—and all the ways they can drive us crazy.

The lavish Layton-Benjamin wedding promises to be an event to remember, and the groom’s wealthy parents have spared no expense to impress their guests by hosting it at the exclusive Cross Creek Inn, a private mountain retreat tucked away in the heart of the Colorado Rockies. But the bride and groom are from completely different backgrounds, and they’ve only known each other for a few months, so it’s been a ‘hurry-up’ engagement that has everyone worried.

When the groom arrives late and tempers start to flare, it’s clear the wedding is a minefield that has to be carefully navigated. As parents and friends begin taking bets over whether the happy couple will make it to the altar, secrets are revealed, new loves emerge, and true happiness is finally found.

Book your visit to the Cross Creek Inn! A witty, fun summertime story about family, friendship, and finding out what matters most—that only Cheryl Holt could tell.

Jennifer Layton spun away from the stunning scenery out the window of her hotel room, and she smiled at her father, Greg.

“I suppose it’s all right,” he replied.

“You suppose?” she asked.  “Don’t injure yourself by exhibiting too much enthusiasm.”

She had three siblings, but she’d always been his favorite.  It was an open and established family fact about which they all joked.  On hearing her remark, he was instantly chastened.

From the minute she’d phoned to tell him she’d gotten engaged and was planning a quick wedding, he’d been slow to exhibit the attitude a girl ought to expect from her only parent.  He was a widower and carpenter whose wife died of cancer when his four children were very small.  Jennifer had just been eight at the time.

He’d spent his life providing for them as best he could.  He was sensible and pragmatic, with strong views about the world and his place in it.  He’d never been the type to reach out and grab for more than he’d been given, but he’d wanted more for her and her siblings than he’d ever been able to supply.  In that, he’d been very generous.

He’d encouraged her to spread her wings, to go to college and move on to a great future, and she’d done exactly that.  She’d fled their home in Portland, Oregon, to attend college in Eugene, then she’d flitted off to sunny, exciting Los Angeles.

In the process, she’d fallen in love with Eric Benjamin.  He was disgustingly rich and had grown up in an environment so different from hers that he might have been raised on the moon.

From the time I was a little girl, I always wanted to be a writer.  I didn’t know how to do it though.  I had no idea how a novel was written.  Nor did I know anything about the fiction market, the genres, the publishing companies, or anything else.

Then, I had two babies back-to-back, and my husband and I decided I would stay home with them, while he continued to work at his job.  I had to replace the income I lost by leaving the job market, and I decided (like the clueless person I am) that I would have plenty of “free time” while I was loafing at home with two tiny babies to take care of.  I figured I could use that time to start writing novels.  I would write fast, sell them quickly and easily, then make a ton of money, and all of my financial problems would be solved.

Have I mentioned I’m clueless about life?  I started writing and quickly learned that I had no idea how to write a commercially saleable novel.  What I found to be even harder was the business side of things, such as finding an agent and actually selling a novel.  That was horrendously difficult!

It took me four years of writing constantly before I got good enough to sell a manuscript.  It was quite a pitiful historical romance.  And the price I was paid?  $2,000!

It took a very long time to get going and to actually make some sustainable money at it, but I’ve always been stubborn, so I didn’t quit.  Now, I’ve written and published over sixty novels.  I’m glad I took this path, and it’s been a good career for me.  But it was never easy.

My first book was a very awful historical romance titled, The Way of the Heart.  I wrote it after spending 4 years of frantic writing, where I was trying to figure out how to become a novelist.  I was planning to be a suspense writer, but I couldn’t sell any of my manuscripts, so I had this great idea of how to slip into the suspense market through a side door.

The romance market is so massive, and I decided I would start writing romances instead.  I didn’t read romances back then, and I didn’t particularly like them, but I thought I could figure it out, sell a few of them, get famous in a hurry, then go back to writing “real” books.  It turns out though that I have an incredible knack for writing some of the world’s greatest love stories.  Who knew?  I stayed in romance and became one of the “masters” of the genre.  It was a strange turn in my life that still surprises me all these years later.

My first book, The Way of the Heart, was really a pathetic attempt at a book.  I could barely figure out how to write a chapter and get from the beginning to the end.  Now, I’ve published over 60 novels—and I’m happy to report that they’re a lot better than they used to be when I was new and confused and trying to figure things out.

I don’t have a favorite author.  I like any well-written book, and I don’t care what the genre or time period is.  If it’s well-written, I’ll like it.  It has to be fast-paced though, with snappy dialogue and great characters.  Otherwise, I won’t bother.

What’s the best part of being an author?  What’s the worst part?

The best part of being an author is that it’s a home business.  I set my schedule, make my own plans, arrange my own career.  It was really nice during the years I had kids at home.  Because I worked for myself, I was able to attend every soccer game, basketball game, and school concert.

The worst part of being an author is that it’s a home business.  I have to work constantly, seven days a week, usually 8-10 hours per day.  The money is sporadic, with good years and bad years, and I never know, from one release to the next, how readers will view my latest offering.  It’s exhausting and even downright scary sometimes.  Mix in the fact that the publishing industry has been in freefall for an entire decade, and it seems even more terrifying.

I am one of the “masters” of the romance genre, so my next project will come in August, 2021, and it will be my new ‘Cads’ trilogy.  For several years now, I have released linked trilogies where the three novels are bound by a single premise that starts with the plot set-up at the beginning of Book #1 and resolves at the end of Book #3.  Each book is a stand-alone novel, but they’re connected by the plot and characters.  I release them on the same day so my fans can read the whole story without having to wait for the next installment. 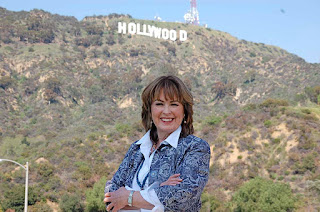 CHERYL HOLT is a New York Times, USA Today, and Amazon “Top 100” bestselling author who has published over fifty novels.

She’s also a lawyer and mom, and at age forty, with two babies at home, she started a new career as a commercial fiction writer.  She’d hoped to be a suspense novelist, but couldn’t sell any of her manuscripts, so she ended up taking a detour into romance where she was stunned to discover that she has a knack for writing some of the world’s greatest love stories.

She lives and writes in Hollywood, California, and she loves to hear from fans.  Visit her website at www.cherylholt.com.

Cheryl Holt will be awarding an autographed print copy of the book (US ONLY) to 10 randomly drawn winners via rafflecopter during the tour.

Posted by Elaine Cantrell at 4:15 AM

I enjoyed the interview.

Hi everyone, and hi again Rita! It's always so fun to see you following me. Thanks to everybody for taking a few minutes to learn more about my new book. It was fun to write and I hope you'll think it's fun to read! Thx for thinking of me. I'm always grateful!