Beyond the Book: Finding Home 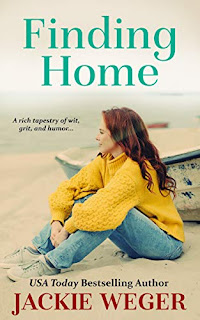 A rich tapestry of wit, grit, and humor…

Twenty-four-year old Phoebe Hawley is on a quest to find her family a home. On the road with two siblings, twelve-year-old Maydean and five-year-old Willie-Boy, Phoebe is out of money, out of gas, and out of patience. The only things she owns in abundance are backbone and pride–neither of which she can trade for food or gas.

A collision with Gage Morgan puts Phoebe’s mission in even worse jeopardy–until Phoebe discovers Gage owns the perfect place for her clan. However, she soon discovers that Gage is the unlikeliest man in the universe to offer a helping hand.

Phoebe wields all the country smarts she owns to worm her way into Gage’s heart, but nothing works. With time running against her family, she plies one last inducement–her scarce feminine wiles.

Phoebe’s ancestors came from the Okefenokee swamp, but as time and circumstances changed they eventually ended up working in cotton mills. However, that work too finally dried up, which is the reason Phoebe is looking for a home for her family. I thought she was funny, spunky, and determined, all of which made me like her. However, in the beginning she isn’t focused on Gage. She just wants his land as a home for her family.

In the beginning I was not too fond of Gage. I thought the author focused more on Phoebe, and at first Gage just seemed surly to me. As the book went on I learned his back story and started to understand him and like him.

In spite of those little criticisms, I really did like the book. Phoebe and Gage found themselves drawn together in spite of a bad beginning. The dialogue between them is sometimes humorous and rather witty. The author totally captured the language and expressions that a girl like Phoebe would use, and of course that made the book seem even more true to life. I thought the story flowed seamlessly. The supporting characters were very well drawn and added a lot to the story. I would definitely recommend the book. In fact, I bought another book by Jackie Weger, and I’m enjoying it as well.

What about you? What are you presently reading?