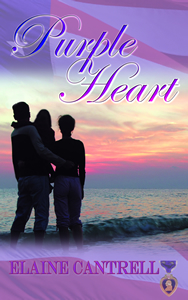 Moments later Perry knelt beside Mike. “Where are you hit?”

“Sit tight. We’ll get a medic as quick as we can.”

As his anger built, Mike forgot about the pain in his shoulder and leg. Ramirez had been his friend. These people didn’t appreciate a thing that the United States was trying to do for them.

Excerpt: We've left Mike and the battle behind and today we meet our heroine Jenna West. I included two or three extra sentences in the excerpt.

A world away, Jenna West signed her name on the dotted line and became a homeowner. “I think you got a bargain,” the realtor said. “There’s a lot of work to be done, but it definitely has potential. The structure is sound. All it needs is a bit of cosmetic work and a new hot water heater.”

“I don’t mind the work,” Jenna assured him. “I’ve never owned a home before; fixing up the place will be a labor of love.”

She took her daughter’s hand on the way to the car. “When can we move in, Mama?” Jo demanded.

“Not for a few weeks yet, but don’t worry, sweet pea. The place is all ours.”

“Hooray,” Jenna cheered right back, and Jo burst out laughing, making Jenna feel as if she were the best mom in the whole world.

Definitely two different worlds. Though it is a sense of accomplishment to own a home.

Charming relationship between Jenna and Jo. Really want to see Jo's role as Jenna and Mike get to know each other. Great snippet.

Bias that has been triggered by intense emotional events are so very hard to let go of. I see a ton of angst in their future. However, love can soften even the hardest heart. Fingers crossed.

Mom and daughter have a good relationship.

Certainly a contrast from his world! Looking forward to their "meet".

Ahh, that feeling when you buy your first home. :-) Everything is a labor of love (for a while). lol

That has got to be the best feeling, buying a new home. Remember when we did, 20 years ago. I hope Jenna stays in love with her new home. Great, feel-good snippet!

It seems the daughter is as excited about this as the mom!

I can feel her pride over owning her first home. Great feeling.