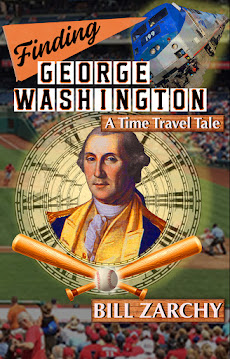 On a freezing night in 1778, General George Washington vanishes. Walking away from the Valley Forge encampment, he takes a fall and is knocked unconscious, only to reappear at a dog park on San Francisco Bay—in the summer of 2014.

Washington befriends two Berkeley twenty-somethings who help him cope with the astonishing—and often comical—surprises of the twenty-first century.

Washington’s absence from Valley Forge, however, is not without serious consequences. As the world rapidly devolves around them—and their beloved Giants fight to salvage a disappointing season—George, Tim, and Matt are catapulted on a race across America to find a way to get George back to 1778.

Equal parts time travel tale, thriller, and baseball saga, Finding George Washington is a gripping, humorous, and entertaining look at what happens when past and present collide in the 9th inning, with the bases loaded and no one warming up in the bullpen.

A new freeze gripped the valley, and a few inches of virgin white covered the now-frozen ruts in the roads. When the soldiers first arrived at this winter encampment two months before, rain and cold had compounded the misery of the men. Lately it had been freezing and snowing, making the hardened ground easier to traverse than the sleety, slippery mud had been.

A small farmhouse made of tan and brown fieldstone sat in flat bottomland near the creek. The back door opened and a splash of warm light lit the new snow. From inside came the sounds of a party—a fiddle, laughter, and high-energy conversation. A tall man in a heavy cloak and three-cornered hat stepped off the small porch at the rear of the house and into the cold. A sentry snapped to attention.

“Just getting some air, lad, stand easy,” the Gdeneral said. “No need to follow.” He trudged off north, away from the house, enjoying the brisk chill.

Ah, he thought, it’s fine to have my dear wife here with me these past couple of weeks! She and the other wives provide such a boost to the morale and hopefulness of the men. It’s worth a wee party to celebrate the difference they make … and my birthday.

The dreadful winter weather and the spread of disease had cost him one-fourth of his army in the early going, but at last there were signs of hope. Foraging for food was still a daily struggle, but now the men were finally housed in hundreds of hastily constructed wooden huts.

The eager effervescence of the Marquis de Lafayette for the past half year; the appearance of the Polish nobleman Pulaski a few months before; the continued loyalty of so many of the troops; the imminent arrival any day now of the Prussian Baron von Steuben; and the General’s wife coming to stay with him during the winter encampment—all these events gave him hope.

I have always felt like an author. My father, Harry Zarchy, was a high school art teacher by day and an author by night (and weekends, holidays, and summers). He wrote and published nearly three dozen books on hobbies, crafts, and the outdoors, most illustrated with his pen-and-ink drawings or his photos. Growing up in this house, I was profoundly influenced by his deep skill set, creativity, and work ethic. Though I never learned to draw, I did photography from a young age and used to love to hang out in the darkroom with Pop, watching the images emerge on the developing paper as we watched. And I served as a hand model for many of his books as well.

All of this gave me a confidence and ease with words and images that would have been difficult to attain any other way. I was a writer for my high school paper and edited the Daily Dartmouth when I was in college. When I attended film school at Stanford, I began to specialize more in moving images and didn’t get back to my writing roots until a little over twenty years ago.

I had a long and successful career as a cinematographer after Stanford, working on film and video shoots all over the world, and I began to realize that many people were curious about my work and travels. Often the experience of working with crews and clients in another culture led to poignant, dramatic, or laughable situations, and I wanted to share those experiences to a broader audience than just family and friends.

I joined a writers’ group and began writing short travel pieces, a number of which were published in newspapers, trade publications, and Travelers’ Tales and Chicken Soup for the Soul anthologies. This was great fun. Giving and getting help and encouragement with the other writers was thought-provoking and stimulating. In 2013, I collected 18 of my pieces and published them in my first book, Showdown at Shinagawa: Tales of Filming from Bombay to Brazil. Showdown tells true stories from my long career working on film shoots all around the world.

With that first book out, I began to schedule book launches and author events and found that I loved reading to audiences. Then I discovered storytelling (in the oral tradition — no notes, no text) and began to take classes at Stagebridge in Oakland. I’ve produced and performed my own one-man show and look forward to telling to groups in person after the pandemic.

Let’s see, my genre is a sci-fi blend, with notes of history, baseball saga, and action thriller. I can’t think of too many other books in this sub-genre! But I can tell you about writers who have influenced me. I do love reading mysteries and thrillers and enjoy much of the work of Stephen King, the No. 1 Ladies Detective Agency series by Alexander McCall Smith, the Maisie Dobbs stories by Jacqueline Winspear, and the National Park Ranger mysteries by Nevada Barr. Sci-fi favorites include Ray Bradbury, Isaac Asimov, and Robert Heinlein. For time travel stories, I love The Time Machine by H.G. Wells’, The Time Travelers Wife, by Audrey Niffenegger, and the Back to the Future movies.

The best part of being an author is creating a work that people respond to. I love hearing from readers who are moved or amused by my writing. It’s a privilege for me to be able to tell people about my book and read segments to them. I love acting out scenes from the book in my own semi-dramatic way. It’s great fun when readers get caught up in the story and have questions or their own interpretations to share.

For example, the other day, I got a message on social media from a reader who said, “I'm about halfway through the book. Right now, you and the others are boarding the train at Davis.” Since most of Finding George Washington is told in the first person by Tim, the protagonist, it brought me a chuckle to realize that the reader had mixed us up. Other readers have contacted me to share their own laughs, emotional responses, common experiences, or thoughts on slavery, baseball, colonialism, train travel, and temporal displacement (time travel). This is tremendously rewarding! It’s special fun to talk with book clubs or other groups who have already read the book and have questions about plot subtleties, character arcs, and locations.

The worst things about being an author: books take years to write, and the work is all created in solitude. Though I enjoy being by myself and indulging my thoughts and fantasies, the ratio of private-to-public interaction in my career as an author is sky-high. I put in years of fruitful, creative alone-time for much less public interaction. My newer interest in oral storyelling gets me out in front of people much more often, though doing it on Zoom is less satisfying than standing up in front of a group and drawing them into my world with a good yarn.

Also, it’s very difficult (1) to get published by an established publisher, or (2) to afford the indie publishing route, and (3) to get your book noticed, no matter who publishes it.

I’ve done some research and written a few chapters for a sequel to Finding George Washington: A Time Travel Tale. Like George, the sequel is alternate-history speculative fiction, based on a true occurrence: in February 1933, after his first election to the presidency but before his inauguration, Franklin Roosevelt was targeted by a crazed gunman with a pistol at a political rally in Florida. A bystander and the visiting mayor of Chicago were both killed, and several others were wounded, but FDR came through unscathed. I remember hearing about this many years ago, and when I began trying to find a story for my next book, it all came rushing back.

In Finding George, the core dilemma centers around this notion: what if Washington never gets back to Valley Forge? Will the Colonial Army still defeat the Brits … and if they don’t, what happens to the French Revolution and all the other wars of liberation that have taken their inspiration from the American War of Independence? In the sequel, tentatively titled Saving Franklin Roosevelt, there’s another speculative notion: if FDR had been hit and killed by one of the assassin’s bullets, what would have happened to the New Deal and his other plans to rescue America from the Great Depression, as well as his eventual leadership of the U.S. and the rest of the free world against the Axis in World War II?

Stay tuned and find out! 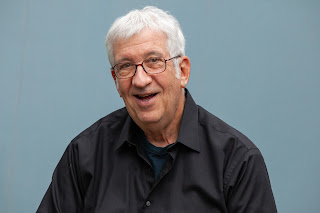 Bill Zarchy filmed projects on six continents during his 40 years as a cinematographer, captured in his first book, Showdown at Shinagawa: Tales of Filming from Bombay to Brazil. Now he writes novels, takes photos, and talks of many things.

His tales from the road, personal essays, and technical articles have appeared in Travelers’ Tales and Chicken Soup for the Soul anthologies, the San Francisco Chronicle and other newspapers, and American Cinematographer, Emmy, and other trade magazines.

Bill has a BA in Government from Dartmouth and an MA in Film from Stanford. He taught Advanced Cinematography at San Francisco State for twelve years. He is a resident of the San Francisco Bay Area and a graduate of the EPIC Storytelling Program at Stagebridge in Oakland. This is his first novel.

Bill Zarchy will be awarding a $50 Amazon/BN GC to a randomly drawn winner via rafflecopter during the tour.

Thanks so much for hosting me today. Let me know if you have and questions about me or my work.