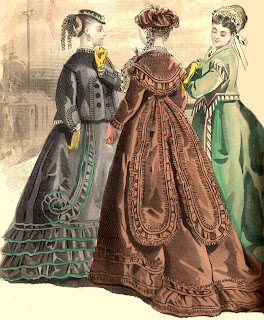 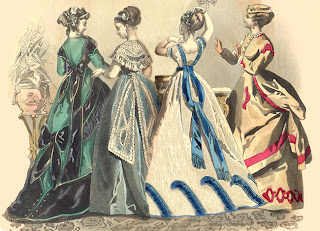 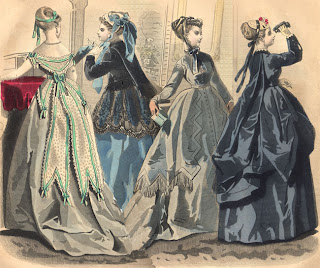 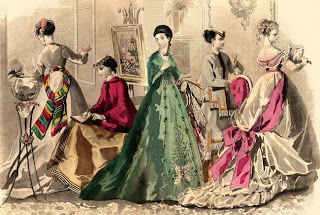 In the early years of the nineteenth century, women’s fashion was influenced by the classical simplicity of Greece, a style embraced by Napoleon’s wife Josephine. However, by the end of the 1820’s women shifted back to romanticism. Skirts were belled out by undergarments, shortened sleeves increased in bulk, and hair was curled into ringlets. The simple, classical gown was replaced with myriad bows, ribbons, tucks, and decorative buttons. Clothes were now made of stiff pastel colored fabric, not soft muslin.

In the mid 1830’s the crinoline was introduced to make ladies’ skirts stand out. It was made of horsehair and linen and shaped and wired to make the skirts as big as possible. Women also wore small, tipped-forward hats. Unfortunately, this style was constrictive and artificial.

During this time period each time of day and each occupation necessitated a complete change of clothes. The first separate blouse and skirt combinations were introduced to simplify things somewhat. Fabrics were the same stiff textured cloth of the earlier decade with cotton for summer wear. Daytime colors were brown, rust, gray, and green as well as Scottish plaids. Pale pastels were used for evening wear.

Lace mitts, parasols, and pouch bags with wooden handles were carried by every fashionable lady. Hair was neatly parted and drawn back into snoods. If you wore them for evening wear they had to be ornamented.

During the 1870’s and 1880’s extreme circular skirts were abandoned in favor of full skirts pulled to the rear and supported by a wire cage, the forerunner of the bustle. Corsets were looser, but emphasis was still on the bust. Style innovations included the high collar, long, tight sleeves which eventually morphed into leg-o’-mutton sleeves. Lace jabots and edgings were used at the neck.

As the century wore on costumes were developed for leisure time activities such as croquet.

I recommend that you go to http://locutus.ucr.edu/~cathy/weev.html and look at Victorian fashion decade by decade. My information for this article came from What People Wore by Douglas Gorsline.

What do you think, readers? Would you have liked to be a Victorian? Not me. I look awful in hats, and I’d rather die than wear a corset. I couldn’t bear the heat in the summer either. All those layers! And have you ever seen a picture of a real puffed horsehair crinoline? Yuck.
Posted by Elaine Cantrell at 10:37 AM

The dresses were beautiful, but I am so glad I live in an era where I can wear my sweatpants and tank top!

Lovely. Wish I had a variety of dresses/gowns from various eras to wear as the mood strikes me, I say while in my t-shirt & sweat pants. :)

I with LuAnn. I'm glad I don't have to get all dressed up like that. It would take forever.

But I don't wear tank tops any more like she does, especially this time of year in the Midwest.

I'm a Civil War reenactor, so get to play at dressing as a Victorian for the weekend, but our corsets have flexible wires as well as our hoop slips. I don't think I'd last a day as a real Victorian. Always happy when a reenactment ends and I can get back into my modern day clothes. LOL.

I went to a fashion show at our local reenactment. Everyone said the clothes weren't hot or uncomfortable. You may have explained why.

LOL. Yeah, we reenactors cheat a bit. But I don't think anyone in this day and age would want to wear the actual clothing they wore. It's amazing what they endured for fashion.

I admit to a fascination of ladies' fashion in earlier centuries...pretty much everything from the 1400s to the early 1900s. I often wonder why because the undergarments and number of pieces in an ensemble would try anyone's patience. Finally, I decided it was because of the feeling of femininity. I like the modern age and being able to wear comfortable clothes, but I still want to feel like a beautiful woman.

I think you're onto something, Emma. In the modern world jeans and a tee shirt go almost anywhere, but deep down I think we all long to feel feminine and beautiful.