My Dead Cicada Came to Life and Terrorized the Family 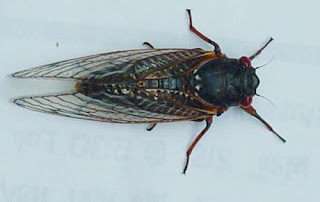 I met the cicada on my way back from the mailbox. I was thumbing through my mail when I passed something on the ground that caught my eye. I bent over for a closer look and came face to face with one big, ugly bug thingy. He looked maybe a little over an inch long.(My apologies to those bug thingy fans among you.) He wasn’t moving, so I figured he was dead.

The cicada looked so …so…big and ugly I decided to take him inside to show him to my grandson. He’s at an age to appreciate an ugly bug. I didn’t want to touch the cicada, so I ran inside for a paper towel and a plastic fork to pick him up with. Why a plastic fork? I could throw it away when I was finished with the bug. My mama didn’t raise me to let bugs touch anything I’d ever use again. She wouldn’t ever let my sister and me catch lightening bugs to put in her good canning jars. We had to use old mayonnaise jars with holes punched in the lids.

Anyway, I got the cicada inside and called my grandson who hurried to see what Grandma had found. About the time he got there the cicada came to life. His wings unfurled, and he took off straight at us. We did the only thing we could; we screamed and started running around the dining room. I’m not sure exactly why I jumped up on one of the dining room chairs, but that’s what I did. Duh. The cicada can fly. My grandson? Who knows; I abandoned him to his fate.

It only took a few minutes for the cicada to run out of steam. Obviously, he wasn’t quite dead when I brought him in, but I could see that he was hurting now, probably on his last legs. Simon (my grandson) opened the door, and I flipped the bug outside with the plastic fork which I immediately threw away. Remember that’s what my mama would have done.

The cicada’s body stayed on the deck for a day or two, until we were sure he was good and dead. We then brought him back in and took his picture. Due to a computer malfunction I can’t show you my cicada’s picture, but I’ve added one at the top of this post. Don’t worry. They all look alike to me. If you’ve seen one you’ve seen them all. (Apologies again, bug people. They don’t all really look alike.)

Speaking of looks, did you know what they look like? I didn’t. I’ve always heard people talk about cicadas, so I decided to do a little research on my buggy friend. Here’s what I was able to find out.

1. Cicadas are insects, best known for the sound made by the males of the species. The males make this sound by flexing their tymbals, which are drum-like organs found on their abdomens. The sound can reach over 100 decibels when the cicada is singing which explains why the noise is so overwhelming when you get a bunch of them singing at the same time. I don’t like the sound. To me it’s a hot, metallic, keening racket that spoils the peace of a summer’s evening. The males make this sound to attract a mate. On an interesting note, if there’s no female of the same species as a lovesick male, males of other species will help the male find a mate. Is this like a human blind date? Hmm. Here’s a link so you can hear what they sound like.
http://www.mechaworx.com/cicada/cicadavideos.asp Try one of the sound files.

2. Cicadas are often compared to locusts, but they aren’t locusts. There are over 100 species of cicada in North America, and over 2000 species around the world. Cicadas exist on every continent but Antarctica. In North America there are two main types of cicadas: periodical (which belong to the genus Magicicada) and annual. The Tibicen is the most common genus of annual cicada in North America. The Magicicada has either a 13 or 17 year life cycle. They emerge in broods, millions at a time. The Tibicen emerges every 2 to 7 years a few at a time.

3. Cicadas spend almost all of their life underground. Cicada nymphs emerge from the ground in periodic cycles. They climb up trees and shed their skins. An adult cicada emerges. The adult cicada’s entire purpose in life is to attract a mate and produce offspring. Five to 10 days after mating the female cuts a slit in a deciduous tree and lays her eggs. The eggs hatch, producing tiny nymphs that fall to the ground. They bury into the soil and feed on underground roots. They remain underground until time for them to emerge.

4. Be wary of observing large numbers of cicadas too closely. When many cicadas congregate on warm days, they feed on the tree fluids and often urinate while doing so. This bug urine is called 'honey dew.' It isn't uncommon to be pelted by honey dew.
The 'honey dew' does not stain, or stink. It feels like rain drops-or so they say. It doesn’t matter to me how it feels or smells. I DO NOT want bug urine anywhere on me.

5. The experts say that cicadas don’t bite. Instead they pierce and suck with this square looking sucker thing. Does it matter if you’re bitten with teeth or pierced with a sucker? I think not.

6. So, what use are cicadas? They aid their host trees by aerating the soil when they emerge as well as trimming weaker branches when they lay their eggs. They also form a vital link in the food chain between trees and literally hundreds of carnivores and omnivores, including: squirrels, birds, toads, raccoons, possums, other insects, people, and even fungi.

7. There is a wasp called the cicada killer wasp that eats cicadas, but so do lots of other creatures including pets. Try to keep your pets from eating cicadas. If the cicada has pesticide in it your pet will eat that when he eats the cicada.

I hope you’ve enjoyed getting to know about cicadas. Once again my apologies to the insect lovers who’ll probably be outraged by my attitude toward the cicada. What can I say? It’s my mama’s fault.
Posted by Elaine Cantrell at 6:10 AM

Email ThisBlogThis!Share to TwitterShare to FacebookShare to Pinterest
Labels: cicadas