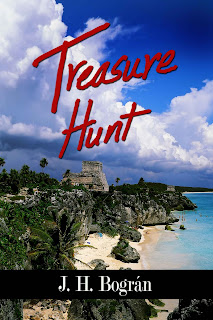 Hello, readers. I'm so glad you stopped by. You're just in time to help me welcome my first guest of 2011, J.H. Bogran. Jose and I share a publisher, Whiskey Creek Press, and he's here to tell you about his book Treasure Hunt. Jose, Welcome to the blog.

Can you tell us five things about you that nobody would ever guess?

1. I like mixing fancy cocktails like Martinis, Tequila Sunrise, Margarita’s and others.
2. As a kid, I cried every time I saw Disney’s The Fox and the Hound. However, I never saw Bambi.
3. I started smoking cigarettes because James Bond looked so cool doing it. Then quit about the same time Bond did too.
4. I had trouble reconciling the commandment “Thou shall not tell lies” with the fact that I write lies, even when we refer to them as “fiction.” But I have no such qualms any more.
5. While in high school, the book that influenced me the most was Mario Puzo’s The Godfather.

So interesting! I never saw The Fox and the Hound, but I cried buckets when I read Bambi, and as far as the lies thing goes, I think we're okay. What do you think makes a book a page turner?

Conflict, conflict, conflict. What can I say? I’m a thriller writer. Every page on every scene must advance the plot, if not, I get bored. I like to read wholesome characters that make me want to know what happens to them. I’m gonna stop here because I think I’m starting to sound like a teacher.

I didn't notice because I'm a teacher myself. Which genre of books appeals least to you? Why?

I would not like to get caught reading a romance. However, I penned a short story that qualifies as one, albeit twisted. Love Me Two Times is about Paul Barry and his love for a woman suffering multiple personality disorder.
So, Romance is my least favorite. Why? Not sure, maybe to keep with the Latin Macho image. lol

Most guys probably don't like romance, but I do have some male readers. Try Return Engagement. It has some action in it. On the average, how long does it take you to write a book?

“Average” is the key word there. Every book has its own story. Treasure Hunt took me a year in research and two months writing. For my Spanish thriller, Heredero del Mal, I started the research as early as 2000 but ended up writing the first draft in 15 days somewhere around 2004. I started working on Highland Creek in late 2006 but finished the second draft on Oct/2010 (Yes, that’s three months ago, that explains why is not published yet). So, as a New Year resolution, my goal is to make a book a year. I have three ideas in full research mode: a sequel to Treasure Hunt, another novel with the same hero from Highland Creek and a third with total new characters.

I can churn them out too, but revisions... Ugh. They take forever. Do tell us about Treasure Hunt.

Treasure Hunt is the first adventure of a thief known only as The Falcon. To contact Falcon, you need to place a creative ad in the web that includes the words: “falcon” and “please.” He’ll rent out his abilities for a price. Here’s the official blurb:
From a prison-monitored-computer, Bill Porter contacts The Falcon to retrieve the money Bill stole back in 1978 and hid in a cave in Central America. But Bill’s former cell mate, Jack Davis, decides he wants the money to himself and his first move is to kidnap Jamie Porter and hold her for ransom. The Falcon stumbles in the middle of the kidnap attempt, rescuing Jamie, only to discover later that she is his employer’s daughter. A cat and mouse chase with the backdrop of a tropical paradise, Mayan ruins, several near-fatal escapes until the climax inside the cave where the money has been sitting for over a quarter of a century.

Wow, I love the sound of that! Would you share your links with us?

I started Twittering, but I don't really know what I'm doing. We’d love to read an excerpt from Treasure Hunt. Be sure to give us a buy link.

Falcon emerged in the middle of the pond, gasping for air, and saw four people at the edge of the water. The one that looked American took command of the situation.
“Give me the money, slowly, or the girl gets it,” Davis warned.

Dutifully, Falcon untied the string at his waist and swam to the shoreline, then with a swing of his right arm Falcon placed the soaked bag on the ground at the man’s feet. He pushed himself away from the edge, facing them at all times. Never breaking eye contact with Jack Davis.

One of the local guys grabbed the bag and opened it. He let go a sigh and an expression of satisfaction passed across his face, and he addressed his employer. “This is money, Jefe. Lot of bills. I count them?”

“No time for that, just close the bag and let’s go,” said the American.

Jamie Porter sat in a corner, the fear showing on her face. Falcon felt useless at that particular moment. There was nothing he could do for her right then.

“You got the money. Now let us go,” he demanded, hoping to bluff a stronger position.

Jack Davis shook his head. “Sorry, Pal, change of plans. We take the girl, just to make sure we get out of here safe.”

“Jefe, you promised me I could have my revenge,” the other Latin guy screamed.

“Oh yes, I forgot.” Davis gave a mock smile. “Sorry Toño. But sure, go ahead.” He motioned to Toño, but spoke in Falcon’s direction. “He’s still upset for what you did to his brother the other night. Do you know he’ll never be able to walk again? Well, Toño here made me promise he could kill you after we got the money.”

“And I suppose that’s a promise you don’t mind keeping,” said Falcon.

“To tell you the truth, no. I don’t mind at all.” He looked directly into Falcon’s eyes, and turned his head. “Carlos, grab the money and the girl. Let’s go.”

The shifty looking smaller man did as he was told. He took the moneybag in one hand, and went over to Jamie and pushed her around to make her stand up and start walking. Jamie reached out to Falcon with her eyes, and it broke his heart. Instead of the hope she was searching for, all he could muster was a searing hatred for Jack Davis. His concentration was trained on him and him alone.

Jack Davis turned to leave, with the mocking smile still firmly placed on his lips. He disappeared inside the tunnel.

Toño walked to the edge of the water and aimed his gun directly at Falcon’s head. “This is for my brother.”

Okay, you hooked me. I have to know how Falcon gets away. Readers you can get your copy of Treasure Hunt at http://www.whiskeycreekpress.com Jose, thanks so much for coming, and good luck with your writing.
Posted by Elaine Cantrell at 10:03 PM

Thank for the opportunity! Loved the questions.

Thank you for coming. Treasure Hunt really does sound wonderful.

Now that's a hook. That has got to entice readers. Excellent interviewed. Enjoyed reading it.