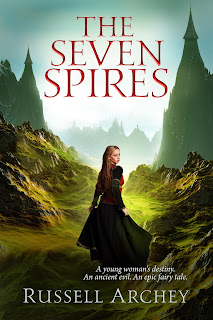 An incredible high fantasy adventure set in a world based on familiar fairy tales, folklore, and mythology, "The Seven Spires" is an epic story of dragons, magic, conquering evil, and discovering magnificent new places.

When a fearsome creature known as Wyvern begins terrorizing Emrallt, one of the seven realms of the continent of Septer, a group of heroes are brought together seemingly by fate to rally against him. A prince, warrior, wizard, and mysterious, sorceress-like sybil try to discover why a common maiden could be the best chance their kingdoms have against Wyvern’s growing forces that threaten to dominate each and every one of the ancient, arcane spires that bind their kingdoms, and world, together.

Wyvern recognized their broken language and knew that White-eye spoke of more than just a town guard or good-natured passerby. Ratlings cared little for the difference between common humans, merchants, and even nobility. It was only a difference in what goods they could pilfer; however, when a ratling described one as ‘important,’ that often meant ‘royalty’.

“The important man—what did he look like?” Wyvern asked.

The two deplorable rodents looked up at him in confusion. They looked through arms held in front of their faces as if toward off a pending strike. Wyvern leaned forward on his forelimbs.

“You said he was ‘important.’ He wore blue clothes. What did he look like? Face, hair—what?” he growled with small tongues of fire licking around his teeth.

Wyvern growled in frustration. The Blue Prince of Avallonis. The little fop could bring Wyvern no end of misery; an army’s worth of misery to be exact. Especially if he had his sights set on the Maiden.

“He threatened you?” Wyvern asked of them.

“Indeed, you had no choice but to flee,” Wyvern said. “But, rules are rules…” he added with menace.

Ever since I can remember!  I’ve usually had trouble answering questions like, “Who’s your hero?” or “What’s your favorite (fill-in-the-blank)”, but from as long as I can remember I wanted to be author of some sort. Barely-known, well-known, or maybe even unknown. I’ve been writing stories since I was in elementary school and wrote in notebooks with a pencil and drew my own hand-drawn illustrations.

The Seven Spires is my first published novel. I wanted to write something that combined my love of world-building, epic stories, symbolism, and mythology/folklore/fairy-tale tropes. The result is what you see here! 5 Prince Publishing picked up the manuscript, for which I’m incredibly grateful, and is helping make the dream come true!

It may sound cliché, but as far as fantasy goes I like the more grounded, gritty settings in Martin’s A Song of Ice and Fire. I also love Tolkein’s prose and wish I could write in that style! I’m also a huge fan of horror and dark fantasy. Laird Barron is definitely one of my favorite horror authors. He takes the cosmic horror of Lovecraft but makes his monstrosities much more sinister and threatening.

Creating worlds and characters and then tying them together in a narrative; feeling like you’re creating something out of nothing. Where once there was blank white paper, there’s now a living, breathing world. It’s definitely my favorite!

The worst would have to be putting your hard work out there and hoping others enjoy it. While criticism helps make you a better writer, it’s still scary to think your stories may land with a resounding thud.

I’m currently working on a dark fantasy story that’s told as a series of short stories sharing a single, narrative umbrella. It combines inescapable cosmic horror with a high fantasy setting. I also have a mystery/thriller novel I’m planning, as well as a horror story of old creatures in a modern setting with a darker, Giambattista Basile-style fairy-tale feel. Oh, and I can’t forget the first part of a trilogy that’s a mix of Supernatural, Bloodborne, and The Witcher—a new dark fantasy setting that I’m excited to get started on! 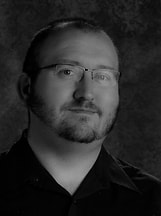 “Russell Archey has been writing since he was old enough to hold a pencil. His love for narratives, world-building, and story-telling has fed into nearly every aspect of his life: from his video and board game hobbies to pressing his most cherished books onto his unfortunate children (who will, one day, read the Lord of the Rings trilogy whether they like it or not). When he's not creating new worlds and horrifying things to threaten them with destruction, he's bringing other author's fantastic works to life as an audiobook narrator, spending time with his two children, and pressing his dear wife's eternal patience with his quirky habits.”

Russell Archey will be awarding a $25 Amazon/BN GC to a randomly drawn winner via rafflecopter during the tour.

Russell Archey is a new author to me, but I look forward to reading this. I always love meeting new authors. Thanks to this blog for the introduction.

I love the cover and look forward to reading the book.