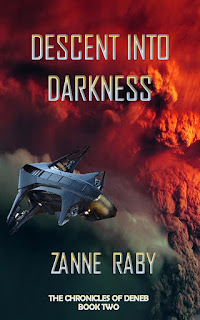 Descent into Darkness: Mayhem follows the Mayflower in the second book of The Chronicles of Deneb series. Journey along with the crew of the Space Ark Mayflower as they adapt to their new home on the planet Deneb. But along with their struggle to integrate into an alien culture, a new battle sweeps across the planet with the arrival of the human-transmitted Chimera bactovirus, bringing war and fanning the flames of racial intolerance. With a bloody conflict raging across the planet, the crew of the Mayflower is split between the two factions and embroiled in the chaos and destruction. Descend with the crew into darkness, where the only survivors of a global war will be on the right side of the border.

“Pallav? You alright?” Tara’s voice broke him from his reverie and he pasted on a phony smile.

“Sorry darling, I was a million light years away. I’ll be fine,” he promised. Sweat trickled down his back in the unrelenting heat of the Denebian day, his disruptive pattern shirt already sticking to his body as he shrugged into his rucksack.

“Daddy, I’m gonna miss you.” The chirpy sing-song voice of little Jolanta gave him cause to smile at the child as she held out her arms to him. Swooping her up, Pallav dropped a kiss on the little girl’s rosy brown cheek, her eyes glistening with tears.

“And I’m going to miss you too, little one.” Hugging the orphaned girl to his chest, he burrowed his face into the cloud of dark hair that was as soft as a feather before pinching her cheek and gently setting her down. Guilt pierced his heart at the sad resigned look on the child’s face. Had it not been for him, Jolanta would be snug as a bug with her biological parents and not in lockdown high above the capital city living with a pair of humans.

Poor little thing… she’s known so much loss in her short life, he thought. Surrounded by death as the human Chimera bactovirus raged across Deneb, Jolanta had been cruelly abandoned by her mother after Tara retrieved the fallen child from the cobblestoned marketplace in the centre of the capital city. He could still picture his wife walking through the door with the tiny tot in tow. Shocked, surprised, but then captivated, Pallav let the child into his heart. It wasn’t like his two teenagers wanted him around anymore. No, Luke and Isabella were busy chartering their own course in the Wessel world with Gomalan insisting that they attend the best boarding school in the nation.

Taking advantage of his position, Pallav had initiated a thorough search for Jolanta’s parents only to get confirmation that they were amongst the thousands in Styria who had succumbed to the pandemic. Since her arrival, the young orphan had been his little shadow, never leaving his side, following the big man’s movements with her luminous opalescent eyes. He smiled inwardly at the thought of Jolanta climbing into her little cot and begging her new daddy for a bedtime story. Guilt-ridden he realized that he’d miss her more than his own children who were so immersed in their new lives that even their weekly holotalks were rushed and awkward. Laughing at himself, Pallav knew he was totally under the child’s spell.

“I promise to be back in time for market day, so no tears, okay?” Taking the little urchin’s chin in his hands, Pallav stared into her eyes. “And you have a promise to make to me too young lady, don’t you?” The little brown head nodded up and down, serious eyes acknowledging the responsibility her adopted father had assigned to her.

Actually that’s a complicated answer. When I was in grade school, nothing captured my mind like dinosaurs and ancient life. All those massive wild and amazing looking creatures, the earth thundering under their feet, gargantuan things with giant leathery wings soaring through the skies – that got my heart going. I used to read everything I could about prehistoric life, from animal to human. It mesmerized me. Still does. But I also loved to read fantasy and science fiction book, and with that came the desire to write. I think it was when I was a pre-teen that I the writing bug really bit me and I wanted to become an author, but life has a way of pushing you down the right path. And so I joined the Air Force and made a career of it. I met interesting people, travelled to fascinating places and was given many challenging assignments. When it was time to put my uniform in the back of the closet, the old desire to write surfaced once again. So my journey as an author had its twists and turns, but in the end, I made it to where I always wanted to be.

The first book I published is The Flight of the Mayflower. That novel’s the start of the series “The Chronicles of Deneb”. I wrote TFOM in 2018 and toyed with traditional versus self-publishing. There are so many stories out there about authors waiting for months to hear back from the big publishing houses only to get a negative response. Over and over again. I didn’t want to wait years to get published and so I decided to take the self-publishing route. There’s so much to learn but also a ton of information online to help first-time self-publishers. Actually it can be overwhelming. I mean, there’s a reason that professional publishers exist, right? Self-publishing The Flight of the Mayflower at first seemed to be a daunting enterprise, but as I was going along, I was putting together Standard Operating Procedures, something that I learned from the military. I’ve got a binder full of information on everything from obtaining an ISBN, to the various formatting requirements, to how to design the cover. So when it was time for me to publish my latest release, Descent into Darkness, the way was paved and it wasn’t the nail-biting experience I had the first go round.

I write science fiction/ space operas and my inspiration has been Lois McMaster Bujold. I really enjoy the novels that form the Vorkosigan Saga. It’s a great mix of humor and space colonization, with good character building and a strong female protagonist. Tons of adventure, intrigue, politics and crazy wild futuristic concepts. Package all that up together and it’s why Lois is my favourite sci-fi author.

For me, the best and the worst parts of being an author are so close together, they’re like Siamese twins. I write to entertain people. I want readers to pick up my novels and leave the world behind. To immerse themselves in my writing. To travel along with the characters in my novels, slowly getting to know the people who populate the pages as they experience exciting adventures. Escapism is a powerful thing. It relieves stress. It allows our mind the opportunity to free itself from the day-to-day troubles that clutter our lives. If I achieve that, I’ll tell you that’s the best part of being an author.

Now there’s the bad Siamese twin. As an author, my heartfelt goal is that my writing provides entertainment for the reader. I have this uncertainty that I won’t achieve this. Will the characters resonate with people? Will the readers want to stay up late turning to page to find out what happens? And of course, will readers eagerly anticipate the next novel to learn what happens to their favourite characters? If the best part of being an author is succeeding in entertaining my readers, the worst part is not knowing if I’m connecting with my audience. Oh, I shouldn’t forget trying to shut off my characters’ voices in my head at two in the morning. Damn, those guys and gals never give me a minute of peace.

Well, I’m writing a series and my current release, Descent into Darkness, is only the second book in “The Chronicles of Deneb”. Now that it’s out, I’ve started working on the third novel, which I’m planning to call Fires of Fury. With the crew of the Space Ark Mayflowernow split between two planets, I’m introducing some new characters to round out the cast. General Ravenna, the fierce leader of the Wessel Army on planet Deneb7, is targeted by the enemy forces but she’ll turn the tables around and come out on top. And then Dr. Daniel Radu, ex-NASA astronautical engineer turned exobotanist on the alien planet Cepheus9, teams up with his supervisor Dr. Meera and entomologist Dr. Burell in some pretty far out scientific escapades. There’s never a dull moment in “The Chronicles of Deneb”! 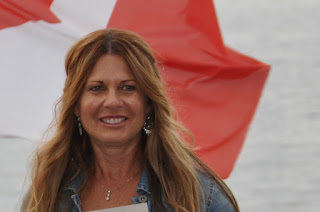 Since the days of the Napoleonic War, there has always been a member of Zanne's family in uniform. Choosing to follow in the footsteps of her ancestors, Zanne joined the Canadian Armed Forces in 1980, and was selected to attend the Royal Military College of Canada – the first year that women were accepted into that prestigious academy of learning. After graduation, she studied to become a Transportation and Movements Officer in the Royal Canadian Air Force.

During a career spanning 38 years, some of the most memorable experiences involved command of 8 Mission Support Squadron as part of Joint Task Force Afghanistan, leading a study on support to the Canadian Arctic involving several trips to Northern Canada, including Canadian Forces Station Alert (the most northern settlement in the world), a three–year tour with NATO at Joint Force Command Brunssum, a deployment as the NATO Liaison Officer to United States Central Command, and finally a nomination as the Deputy Commander for the Canadian Forces Recruiting Group.

After hanging up the uniform and putting away the combat boots, Zanne bought a small acreage in Central Ontario and designed her own house. With an office overlooking the picturesque shores of Georgian Bay, surrounded by maps and images of alien worlds, she is pursuing her life-long ambition to become an author. Enough of the reports and returns that littered her desk over her career, now she could turn her attention to unleashing the creativity that had taken a back seat to the analytical world of logistics. The time had come to shake the dust off and begin a new career. The winds of change had called.

Zanne is currently crafting The Chronicles of Deneb, a sci-fi series that will take the reader from a dystopian earth on a voyage across the galaxy in search of a safe haven. But the planets the team discover provide anything but the sanctuary they sought. In her spare time, Zanne enjoys travel, photography, hiking, and gardening. And always, a good story to pass the time.

Zanne Raby will be awarding a $15 Amazon or Barnes and Noble GC to a randomly drawn winner via rafflecopter during the tour.