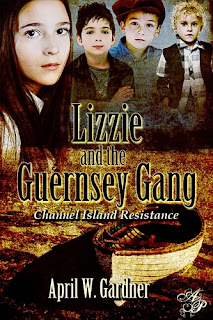 Hello, readers.  Matt McCallum here.  Elaine told my story in her book A New Dream.  My wife and I will be your hosts through the month of December because we think Elaine needs a little time off.  Today you'll have to make do with me, though.  Violet runs a catering business, and she's swamped with work today.  I tried to swipe one of her recipes to share, but she smacked my hand and sent me on my way.

Luckily, April Gardner said she'd help me out.  If you don't know April, she's the author of Lizzie and the Guernsey Gang which released November 15 from Astraea Press.  Here's April's recipe.  Don't tell my wife I said this, but April's recipe sounds better.


Holiday Green Beans with Bacon
1 package (16oz) frozen cut green beans
3 tbsp water
2 tbsp butter
7 tsp brown sugar
1/2 tsp salt
1/2 tsp chicken bouillon granules
6 slices bacon, cooked and crumbled.
In a microwave-safe bowl, combine the first six ingredients. Cover and microwave on high for 6 minutes or until the beans are crisp-tender. Sprinkle with bacon.
Note: Works great with canned beans too!
Doesn't that sound good?  Readers, I convinced her to tell us what her book's about and share an excerpt with us, so enjoy.
Blurb:
Lizzie Browning loves nothing more than her tiny, island-home of Guernsey, but when German troops invade, she knows nothing will ever be the same again. For Lizzie, younger brother Andre, and cousin James, the time to escape is now, and they know just how to do it. But Lizzie soon learns that God doesn’t always answer prayers in the way she expects. He might actually plan for them to live under Nazi rule…forever.
The Attack
I had just carved out a door for my sandcastle when a plane appeared on the horizon. Like a giant bumblebee, it hummed and buzzed toward where we’d dug a medieval village in the sand.
The buzzing increased, and Andre pointed. “Look, here comes another one.”
Yesterday we had seen a plane making lazy circles overhead. Bold black, crooked crosses marked its wings. It had come and gone as harmless as a butterfly.
“If he comes close enough, let’s wave this time,” my brother suggested.
On our feet now, we trotted down the beach toward the airplane. “There’s another. And another,” I said. “Just look at them, will you? They’re so shiny.”
The planes raced toward us. Their droning grew louder. One broke away from the group and made a sharp turn east.
James grabbed my arm, jerking me to a stop. “Lizzie, wait.”
“What is it?” I asked.
“I think we ought to go home.” His voice grew quiet and hesitant.
Andre shaded his eyes with his hand and squinted into the sky. “Aren’t they friendly?”
Like a hawk preparing to dive for a rabbit, moving in unison, the planes dove toward the earth. I could see their wheels now. Their noses pointed toward the ancient fort set on a nearby bluff.
My gaze shot to James. I found fear in his eyes. One more glimpse at the planes, and I understood. At once, the whine of their powerful engines became the sound of the enemy. The sound of Germans.
I clutched Andre’s hand and ran. James was just ahead, leading us home. He dashed over the stony ground in a straight path toward the seawall and the road just beyond.
Rocks dug into my feet. The racket of the planes swelled behind me. From across the island, more great rumbles reached my ears.
“They’re bombing St. Peter Port,” James cried.
My legs picked up speed, as if trying to keep time with my heart pounding in my chest. Andre struggled to keep up, but I refused to let go or slow down.
The seawall loomed ahead. In one leap, James mounted it. He turned and thrust out his hand. “Come on, hurry.”
Still running, I stretched my arm toward him. A resounding blast shook the earth under my feet. With a cry, I tumbled forward and slammed into the stone wall. Disoriented, I looked for my brother. He wiggled beneath me.
I crawled off him. “Are you hurt?” Half my words were drowned in another violent roar. Before my ears had time to stop ringing, a third deafening blast rattled my chest.
My head hurt and my thoughts jumbled inside my brain. Crouching at the base of wall, I covered my ears and pressed myself against Andre. He trembled beside me, eyes squeezed shut.
James slid down the wall and huddled beside us. “Cover your head,” he shouted into my ear as the scent of smoke reached my nose.
I obeyed.
Just days ago our parents had been given an opportunity to send us away to safety. Mum was even invited to follow after and join us in England. But she had refused both offers. Why? Hot tears streaked my face.
As my head clattered, I couldn’t vanquish the thought: The Germans are coming, the Germans are coming. The Germans are coming!
Two more concussions rocked the ground. I quaked from the inside out. Baffling thoughts assailed me. What was happening? What had we done to deserve this?
As the sounds of explosions filled the air, a new thought tumbled around in my mind—one I’d never had before. For the first time in my life, I wanted to leave my beautiful island and never look back.
This book sounds like a winner to me.  I'm going right now to buy some copies to give to my employees at Chef's Pantry.  April, thanks for all your help.  Oh, wait.  I didn't tell you where to buy the book.  You can get it at http://www.astraeapress.com/#ecwid:category=662245&mode=product&product=7105197
Posted by Elaine Cantrell at 9:30 PM

Hi Matt! You and your wife are so sweet to give Elaine some time off. I'm sure it's much deserved! Thanks for hosting today and for having me and Lizzie on Hope. Dreams. Life...Love. Holiday blessings!!

Thanks, April. We appreciate it. Hope Santa is good to you. Matt.

Thanks, April. We appreciate it. Hope Santa is good to you. Matt.