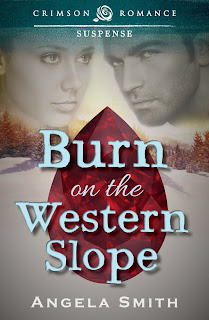 Burn on the Western Slope

On the ski slopes of Montana, deception turns deadly and seduction becomes more hypnotic than jewels.

Reagan McKinney is on a mission to discover more about a deceased uncle who mysteriously left her a sizable inheritance, a condo in the mountains, and a stash of stolen jewels.  With both her graphic design career and her love life in shambles, the opportunity to begin a new life couldn’t have come at a better time.  When she becomes involved with the sexy FBI agent next door, she finds her struggle is not only to keep her heart intact, but her life.

Grief stricken after an undercover investigation ends in the tragic death of his partner, FBI Agent Garret Chambers goes home to find solace in the arms of his mountain home.  That is, until his boss assigns him to investigate the spirited brunette staying in the condo next door.  He is assigned to investigate Reagan’s involvement with a large jewel fencing organization, but his investigation becomes comprised when his attraction to her heats up.  Will his discovery destroy everything he has come to love, including Reagan?

“Wait,” he said, settling his hand over hers. He didn’t know what he would say to keep her here, didn’t know if he should kiss her again. Had he insulted her in some way? “Do you have a boyfriend back home?” he asked. A stupid question at a time like this, but he had to know. For Buchanan, who would call sometime tonight, and for himself.

Silence stretched among them. He fought to soften his breathing, but his heart only pounded harder as he tried to convince himself she was not his to possess.

When she looked at him, dead in the eye, she didn’t flicker. The strength she’d shown on the mountain today, pushing herself when most women would have cried and complained, and the snappy comeback with Tanner made Garret realize she was the kind of woman who could stand up to a man like Javier Mass. The type of woman Javier—or Nelson, either one—would prize. Garret’s world capsized.

Shaking her hand from his, she said, “Shouldn’t you have asked me that before you kissed me?” 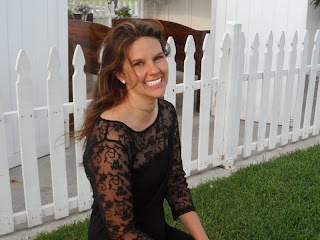 During my senior year in high school, I was dubbed most likely to write a novel because I always had my nose stuck in a book.   I would hide my romance novels under my history book until my teacher called me out on it.  Writing has been my dream ever since my mother read Brer Rabbit to my sister and me so often that we were able to recite it back to each other before actually learning to read.  I love reading about the adventure of love, and getting involved in the legal field developed my love of suspense. I believe love is a mystery that most people have trouble resolving.  While I don’t expect we’ll ever solve that mystery, I love to read and write about characters who work to solve their love’s mystery.  See more about me at my website www.loveisamystery.com or tweet me @angelaswriter

Readers, make sure you follow the tour for a chance to win one of the following prizes:  a car mirror hanger or key chain (a seashell as a tie-in to her book), and mp3 album by Pretty Little Blisters, or three $10 Amazon gift cards.  You can find her schedule at http://goddessfishpromotions.blogspot.com/2013/06/virtual-super-book-blast-burn-on.html

Thank you for hosting! I'll check back later, but for now I leave readers with this question: What is your favorite vacation destination?