During the month of December my characters take over my blog. Let's drop in and see what they're up to.

All hail! Welcome to all of Madame's friends. My name is Prince Alan, and I am here to share a marvelous video with you. Madame enlisted the aid of a talented video artist to create a fitting tribute for her latest masterpiece Rest Thy Head. I shall share it with you as I know Madame would wish. Then, perhaps a short excerpt from one of her Christmas stories.  I am fond of the one titled The Table in the Window because I enjoyed seeing a villain reap a suitable reward. It is a short work, only 16,000 words whereas the book of my co-host Nikki Lane is a full length novel. As Madame Nikki as said many times, her story is called The Best Selling Toy Of The Season. I beg of you to consider giving books as a gift for Christmas, and if you should pick Madame's books, so much the better. 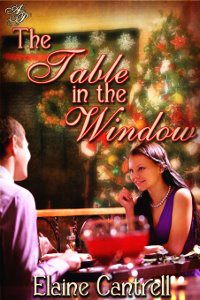 I’ll have a blue Christmas without you…

Marley Matthews shook her fist at the driver of a sleek, gray
Jaguar. “You splashed my coat!” she yelled. As expected, the driver
never even bothered to acknowledge her presence.

She sighed, pulled her coat more tightly around her, and
shook her big umbrella in hopes of dislodging the ice pellets
freezing on every metal rib. What a dreadful day. If Michael hadn’t
insisted they meet for lunch, she would’ve stayed home and kept
warm. She still had some Christmas shopping to do, but it was too
cold and icy to care.

She smiled as thoughts of Michael warmed her. He had
asked her to marry him six months ago and, in that time, she had
discovered what true happiness felt like.

Barton’s loomed up ahead through the rain and fog. Located
in a building with the date 1889 set in stone way up high next to the
roof, it had been vacant for a long time before Tim Barton bought
the place and opened his restaurant there.

Through the window, she saw a huge Christmas tree
standing near the grand fireplace for which Barton’s had become
locally famous. Colorful lights outlined the top of the building, and
a huge green wreath covered the entire upper half of the door.

The sound of sweet carols greeted her when she entered the
restaurant. Where was he? There. The table in the window. The one
where the dark-­‐‑haired, muscular god was sitting. She waved and
almost floated across the floor to meet him, buoyed by a wave of
happiness so intense it almost hurt.

“Hey, there,” she called, even before she reached the table.
“Seeing you makes up for the lousy weather.” She smiled as she
took her seat and busied herself with removing her wet coat.

Michael, who wore the wheat-­colored sweater she’d bought
him last month, stared out the window as if he saw something far
more fascinating than rain and fog. He hadn’t met her eyes once,
and he didn’t have the hint of a smile on his face. “Hello, Marley.”

The waiter, a guy whose name tag identified him as Robert,
approached to take their order. “What’ll it be?” he asked with a
smile. “Hot chocolate? Coffee? Or do you need something stronger
to warm you up?”

Robert offered them a menu, but Michael waved it away.
“I’m not having lunch.”

Marley’s eyebrows shot up. As the waiter left the table, she
said, “I thought you wanted to have lunch.”

“Okay, talk.” Marley reached for his hand, but he drew it
away and put it in his lap.

“Uh…Marley…I have something to tell you.” He cleared his
throat, and this time he stared at some point right behind her left
shoulder.

Marley’s heart thumped. “What is it, Michael? What’s
wrong?” Was he ill? Had he lost his job?

He stared at a burned spot on the rustic table as if it had
come to life and tried to bite him. “I…I’ve met someone.”

Marley cocked her head. “Who did you meet?”

He’d pitched his voice so low she had a hard time hearing
him. “Her name is Heather.”

Everything clicked. He wouldn’t hold hands with her. He
wouldn’t look at her. Cold more intense than that outside settled
into her veins and almost took her breath away, but she clung to
the hope that she was wrong. “I...I don’t understand.”

His eyes met hers briefly before they slid away. “Yes, you
do. I’m sorry, Marley, but I can’t marry you after all.”

Email ThisBlogThis!Share to TwitterShare to FacebookShare to Pinterest
Labels: Rest Thy Head, saturday sample; romance authors. romantic novels, The Best Selling Toy Of The Season, the table in the window