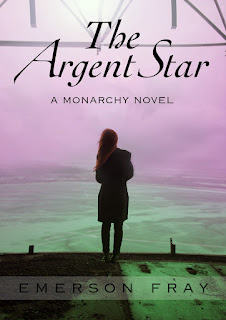 THE ARGENT STAR
by Emerson Fray

What happens when your decisions affect an entire universe?

Ren Argent wanted to be an archeologist and spend her life exploring the lost cities of Earth.  But when a new planet is discovered and her father is appointed King, she has to leave behind everything she knows to rule over a place she’s only heard of in legends.

Not long after her arrival she discovers there are insurgents hiding in the darkened forests and the planet is on the brink of civil war.  It won’t be long until the Monarchy steps in to “neutralize” the threat.

Will she be able to stop the hostile takeover?  Or will her actions ignite a rebellion across the universe?

“He wants you to marry soon, but I think he’ll be happier if you’re dead.”

Ren knew Garret was trying to get her to marry someone on Novae but she hadn’t thought he’d be happier if she was dead.  She didn’t think her death would benefit him in any way, actually.  Or anyone, for that matter.

“Garret might be a snake, but he would be happier if I just married someone,” Ren argued.

“He’d be happier if Elian was on the throne.”

That caught Ren by surprise.  “What do you mean?”

“Maks cannot be controlled,” Sheridan cut in, her voice low.  “He does what he believes is right and best for the people, not the Monarchy.  Elian is not as strong as Maks; he’d fold under their pressure.”

“Elian is plenty strong,” Ren said.  “And if he were the King then he would be great.  He would--”

“Be easily controlled,” Abetha interrupted, “at least Garret thinks so.”

Ren bit down on her bottom lip.  “No he wouldn’t.”  It was true though, and Elian had plenty of weaknesses they could exploit.  All they had to do was threaten to take away his machines and he would crumble.  But Ren wanted to think her brother had more integrity than that and shook her head.

“He would compared to Maks,” Abetha said carefully.  “The Monarchy is having trouble keeping Maks under their thumb.  He isn’t doing what they want here.”

“And what is it they want?” Ren whispered.  It was what she’d been trying to figure out ever since she’d left Earth.

In the darkness, Sheridan answered, “Control.”

Emerson Fray currently resides in Hamilton, Ontario.  While most of her stories happen on other planets, she remains on Earth 24/7 hunting down hawks and bugs to photograph, as well as chasing her mother’s dog to reclaim stolen shoes.  A self taught Pokemon trainer and coffee lover, she spends most of her valuable time pinning recipes she will never make on boards she will forget about.

The author is giving away a $20 Barnes and Noble/Amazon gift card. Use the link below to enter. You may find the tour schedule at
http://goddessfishpromotions.blogspot.com/2015/04/super-book-blast-argent-star-by-emerson.html

Thanks so much for hosting! :)