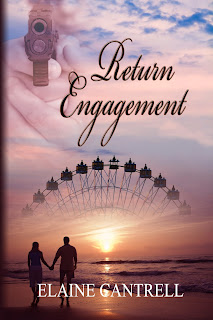 Welcome to Weekend Writing Warriors and Snippet Sunday, your chance to sample the work of a talented group of authors. When you finish here, go to the two URLs below to find more excerpts.

To recap, my hero and heroine have met on a beach ten years after his father broke them up. She's engaged now, but neither of them could ever forget the other. In this excerpt they're at a beachfront carnival. The first sentence is what Elizabeth is thinking.

I’ll probably have to pay for it later, but darn it, tonight I intend to enjoy myself.

They rode the Ferris wheel and the tilt-a-whirl two times each. Then they went through the haunted mansion which gave Elizabeth a great chance to scream and cling to his side. She hid her face against his shoulder, savoring the male scent of him. When they left the haunted mansion, they found a place that sold cotton candy and funnel cakes. They bought a huge amount of both and devoured the sugary treats as if they’d never had anything so tasty. I shouldn’t flirt so brazenly with him, Elizabeth thought, but who cares?

She paused when they passed a shooting arcade. “Richard, you’re FBI, so I guess you’re supposed to be a good shot. Win me a stuffed animal.”

Posted by Elaine Cantrell at 10:37 PM

Lovely snippet, although ... who cares? She's engaged, she should.

She probably wants a souvenir for a single perfect day, before she goes back to her old life . . . yeah, right. :D

Oh my she is flirting full force and this could have some bad consciences for sure.

OK, so she's putting him to the test here at the firing range. I liked it - your description pulled me right into the scene.

Darn it! Now I want to go to a county fair and it's not fair season yet. Nice scene-setting!

Brings me back to days gone by, Elaine and now to the serious part, the challenge to see if he's a good shot. Hmm.

An amusement park or carnival date is such fun! My favorite ride is the tilt-a-whirl, which always makes me think of my dear departed grandpap. He got me back onto the ride some years after I'd sworn it off, and taught me the secret of never getting sick again on that ride. I bet he'll be an excellent shot and win that prize.

Great description. I'm feeling like she really shouldn't be thinking it's okay to be seen with this guy, flirting so openly...

The last line is fun though. Didn't know that about him...

She's asking for trouble, all right, but I think it's good trouble. If he wins her the prize, does that means he wins her, too?

Lovely scene. Had me remembering going to the local carnivals.

A fairground of fun - I can taste the funnelcake.

I really like the way you've described their evening and the pleasant things one can enjoy at a fair like this. Will be interesting to see how he does at the shooting arcade and what he wins for her! Enjoying the story, great snippet!

I really like how this is working-- a whirlwind tour of carny thrills is a literal blast from the past and recalls all of the feelings the young lovers once had for each other. Nice work.

Wonderful imagery and a chance for the two to remember how they were together. Well, you gotta tell us. Did he win her the stuff animal? :) I'm betting yes.

I like the last line. I think the game owner is about to be in for a surprise. Nice snippet.

She's well aware of her flirting, a dangerous game for sure. As for his shooting skill, he shouldn't be but I wouldn't be surprised if she is too much of a distraction to make it a clean win.

That's pretty fun. I guess it wouldn't be as much fun without the flirty. :)