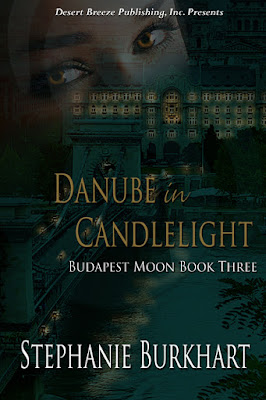 Danube in Candlelight
by Stephanie Burkhart

Morgan Duma has always known she's different. Her eyes have unusual gold rings around her irises, a trait she's inherited from her father. She's faster and stronger than most. Her endurance and stamina allow her to complete tasks in a quick and efficient fashion. Since she was a little girl, she knew there was only one man for her -- Adam Varga.

Morgan learned to dance in Adam's arms. They grew up playing the piano together. Adam's calm, soothing presence was the perfect compliment to her restless soul. Not only that, he shared her differences down to his feral eyes.

Enter Zoltan Kristos, Hungary's Minister of Reconstruction. He shares those same golden eyes that Morgan possesses. After Zoltan carries her mother out of a blazing fire, Morgan's life takes a turn she doesn't expect. She discovers the reasons for her differences, and questions her very identity. Is Adam strong enough to be the man she needs him to be?

Morgan drew in a deep breath as the knot in her shoulder tensed. Adam had a point. How could she be so self-centered, dwelling on her high-strung emotions? Perhaps it was a cover. Perhaps she couldn't face the real issue because it mortified her. She didn't want to think about it now. Morgan turned her head away and reached over her shoulder to massage that tension-filled knot.

"Turn around." Adam's voice brooked no debate. She liked a man who commanded authority. Morgan turned, and he massaged both her shoulders. Heat from his hands trailed down her back. Her core warmed. Her body relaxed, reacting instinctively and with a desire she couldn't hide.

"A nerve? In my neck?" She took a step backward to be closer to him.

"No. About your father. Is your real fear about what will happen to your mother once he turns her?" Adam kept his voice low and leaned close to her ear.

She closed her eyes briefly and faced her anxiety. "Yes."

"Morgan, our fathers' condition has a host of positive traits -- heightened senses, for example, but the best trait is the healing factor."

"I understand, Adam. That healing factor will help my mother recover from her awful injuries, but it comes with a tradeoff -- she's going to become a werewolf."

"Is it better she become addicted to morphine? That addiction is a beast in itself. Which would you prefer she'd become? The soldiers hooked on morphine have vacant eyes, and their hands tremble for their next fix. Do you want that for your mother? Fighting something she can't win against, or do you want her dealing with a manageable condition? Both our fathers are good men. They've managed it."

Morgan pursed her lips. Adam's tone was laced in objectivity and confidence, offering her a plausible reason for her father's actions. Morgan didn't want a shell of skin and bones that resembled her mother -- she wanted her mother well, both emotionally and physically. Why had she been so selfish not to see that?

"It doesn't bother you that you have these traits?"

"I'm comfortable with who I am."

Morgan spun around, pressing the length of her body against Adam, curving her hand around the nape of his neck, and bringing his lips to hers. Their mouths met in a searing kiss full of desire. Want. Warmth. Pleasure replaced Morgan's emotional pain, and she deepened the kiss between them by sweeping her tongue into his mouth. Adam groaned, wrapped his hands around her waist, and tugged her closer. Morgan continued the kiss, nipping his lower lip with her teeth. A blast of heat from his body washed over her like an ocean wave, sending pleasure spiraling through her. God, she had never felt so wonderful.

This novel is a typical Stephanie Burkhart in that there are some things you can count on.

This book has all of those qualities, but I personally thought Danube in Candlelight is one off her most appealing romances. It was super easy to identify with the angst felt by both the heroine and the hero. Challenges they never saw coming present themselves, and some of them can never be truly solved. The heroine/hero just have to live with them if they can. And if is the operative word because we're not talking about choosing paint colors for the living room.

I also was happy to see the budding of romance for some of the supporting characters. I believe they'll get a book of their own in the future, and I hope they do.

This is a paranormal romance so if you like that genre you're sure to like the book, but I think it would appeal to anyone who likes romance novels. It's a good story. 5 stars 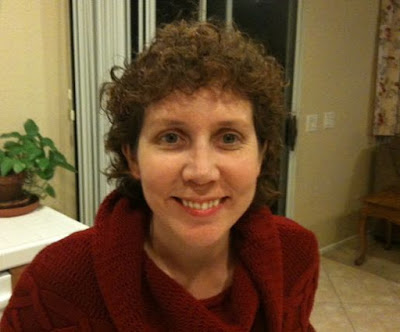 Author Bio: Stephanie Burkhart is a 911 dispatcher for LAPD.  She was born and raised in Manchester, New Hampshire.  After serving 11 years in the US Army she currently calls Castaic, California her home. Stephanie was married in Denmark in 1991 and has two young sons. She adores chocolate, is addicted to coffee and enjoys early morning walks.  She's also an assistant den leader for her son's Cub Scout den and is a Boy Scout mom. She writes paranormal, contemporary, and steampunk romance and has two children's books published with 4RV Publishing.

BUY LINKS FOR DANUBE IN CANDLELIGHT:

AMAZON KINDLE BUY LINK: http://amzn.com/B0061XJFG0
BARNES & NOBLE NOOK BUY LINK: http://www.barnesandnoble.com/w/hungarian-moon-book-three-stephanie-burkhart/1107039692?ean=2940013659148&itm=1&usri=danube%2bin%2bcandlelight
ALL ROMANCE EBOOKS: http://www.allromanceebooks.com/product-hungarianmoonbookthreedanubeincandlelight-636082-139.html
The author is giving away a $10 Amazon/B&N gift certificate. Use the link below to enter.

Posted by Elaine Cantrell at 9:53 AM

Thank you so much for having me. I'm glad you enjoyed the story.
Smiles
Steph Burkhary

I'm looking forward to reading this, thanks for sharing it with us.

This sounds really intriguing, esp. since I'm going on a Danube cruise in the fall.

Fantastic review! I can't wait to read this one myself :)

You're terrific and so are your giveaways! Thanks for the chance to win!

Thanks for hosting this giveaway, have a great Thursday!

I enjoyed reading the excerpt. This book sounds like such an interesting and intriguing read. Looking forward to checking out this book.

Hope you are having a fabulous weekend! Looking forward to reading this book!

Does your 911 work ever make an appearance in your writing? You must encounter all sorts of interesting calls.

I have added this book to my TBR list and look forward to reading this book!

What is the name of your favorite restaurant?