Into the Devil's Den 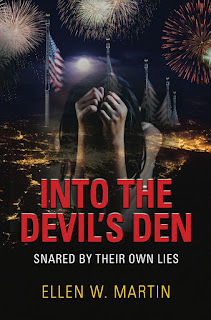 Into the Devil's Den - Snared by Their Own Lies

For twenty-years Sam Steele lived with a lie gnawing at his conscience — for twenty-years his only child believed her mother was dead. Without warning his ex-wife springs from the ashes of the past and reaches out to him in his capacity as a veteran Immigration Custom Enforcement agent.

When Sam’s ex dumps a father’s living nightmare into his lap, he must choose between doing his duty as a law enforcer and jeopardizing his cherished relationship with his daughter. Circumstances beyond his control leave him no choice. Before he can seek forgiveness, TERRI ANNE disappears. Sam neglects his duties as an ICE agent and becomes obsessed in finding her. In the wake of his search he unravels a trail of murder, illegal Green Card marriages, and unveils a jihadist’s plot to launch a terror attack on American soil.

INTO THE DEVIL’S DEN – SNARED BY THEIR OWN LIES weaves a tangled tale of suspense, murder, and treachery. Each twisted circumstance is triggered by that one well-intended lie Sam Steele told his child — a lie that mushrooms into several more falsehoods and leaves multiple lives dangling by a single thread. The daunting task of facing the truth and the race against time pushes ICE agent Sam Steele’s integrity to the limit.

Michael shifted his position in the chair; leather groaned beneath him. Arrogant bastard, he thought. Coming here was a mistake. A bigger one was not keeping quiet about Maggie. He took a deep breath. Yeah, right, like he had a choice. When you sell your soul to the devil, he owns you forever.

Michael nibbled the inside of his mouth. How in hell did Banks discover he was playing both sides of the fence? For years he’d been so careful. Moot point, the Senator had his balls in a vise, and there was no escape. You don’t cross a man like Carter Banks and easily get away with it.

The Senator pulled a fresh cigar from a cloisonné humidor. “What’s the deal on that Immigration agent Steele?” He snipped the end of the cigar and lit it. Pungent smoke ringed his head, fouling the air.

“The man’s possessed. His daughter is missing and he blames Rashid and Jaali.”

“This guy better not get in the way,” the Senator said. “Contain him.”

“And, how do you suggest I ‘contain’ an enraged Papa Bear?”

“Not my problem,” Banks said folding his hands behind his head. He leaned back in his chair, “You’re the so-called professional,” he said; a sinister grin stretched across his face. “Do what you do best.” His smiled disappeared, “And, get it done before things get out of hand.”

Michael struggled to contain his disbelief. The bastard’s suggesting he murder Steele, too. He couldn’t, no wouldn’t do that to Maggie, not if he wanted her back and he did. He leaned forward, arms on knees. “Before we go to extremes, use your influence with Homeland Security. Get his superiors to rein him in.”

A proud wife of a retired Air Force officer, mother of one son and grandparent of three grandchildren, Ellen, didn’t start writing until retirement years, and even then she considered writing a hobby.  In 2019 she published a historical fiction, SONS OF CUBA, a two book series.  INTO THE DEVILS DEN is her third publication.  During the early months while COVID-19 was wreaking havoc through the nation and around the world, she took the opportunity to write another suspense thriller entitled SHATTERED LOYALTIES which she hopes will be published and released sometime in 2021.

The Martin’s call the snow-white beaches and emerald waters near Northwest Florida home.

Ellen W. Martin will be awarding a $25 Amazon or B/N GC to a randomly drawn winner via rafflecopter during the tour.

Good Morning and thank you so much for hosting my virtual book tour INTO THE DEVIL'S DEN - Snared by Their Own Lies. I hope everyone enjoys the excerpt and hope they will add to their reading list for their next suspense/thriller.

Sounds great, thank you for sharing.

Thank you for hosting.

Happy Friday! Thanks for the wonderful tour, I've enjoyed following it and reading all of the great posts along the way.

Thank you Hopes and Dreams for hosting my book tour today.

And thank you Victoria and Rita for being such faithful followers of my tour. I hope you enjoyed the excerpts and will consider adding INTO THE DEVIL'S DEN - Snared by Their Own Lies to your reading list. Good luck in the drawing.