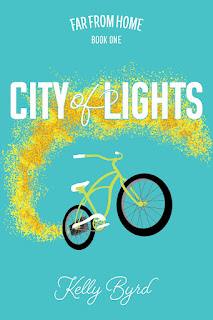 (Book 1 in the Far from Home Series)

What happens when oh so ordinary Mary Jingo, follows her instincts (and her nose) and ends up in a magical land Far From Home?

In City of Lights, author Kelly Byrd introduces readers to Mary, who is one week away from finishing fifth grade. Mary’s mind is on starting middle school in the fall and finally getting her own phone. But then this ordinary girl notices glimmers of light and meets a strange little man who conjures the best smell she has ever smelled. Before she even stops to consider what she’s doing, she agrees to accompany the man to the land of LeeChee, where our Mary Jingo from the Shadowlands in seen as warrior and a great hope.

Now this very ordinary girl must find a way to help save LeeChee from Thrall and restore the Everything—a magical life- and joy-giving force that somehow connects Mary’s world to LeeChee. How can she face the Void, the foul-smelling Shoeboxians, or the evil Mellie? And how can she do all of the Far From Home?

Mary Jingo woke up in the most beautiful room she had ever seen in her life. For the first three minutes of wakefulness, she lay on her back and stared at the gauzy canopy over her bed. She also desperately tried to remember where she was. A brief mirage of hazy images flashed through her brain. Then, her memory triggered, she caught the rotten smell of Shoeboxian and sat up straight. She looked around, searching for an evil, neck-less Shoeboxian head, but all she saw was a circular room made entirely of windows on one side. The sun glared so brightly through the glass that Mary could only squint her eyes and look around. All the furniture in the room was white. The curtains were white. The bed sheets were white. Even the night gown Mary had on was white. The entire room was glaring.

She ventured from the bed to the curved windows. She was very high up, which LeeChee was starting to make her feel accustomed to, but she still felt a small drop in her stomach from being at such a great height. Below her stretched a massive ringed City for as far as her eyes could see. Wherever she was, she was in the center of all it. The City teemed with People, bicycles, and life. In certain areas, Flikes and Thunderbirds swooped over the walls of each ring. Some flew not too far from the window she stood behind. The City was divided into rings, each one surrounded by a giant golden wall that reflected the sunlight so strongly that the City glowed even in the bright light of day. Beyond the outermost wall, the mountains loomed, looking clearer and more defined than they had two days before. As her eyes fluttered against the light, a door in the floor sprang open. Mary turned around to find two girls about her age standing in front of the bed. One of them held an incredibly delicious tray of breakfast.

“Mary Jingo!” the one without the breakfast tray exclaimed. She was pale and rosy at the cheeks, her round face framed by a massive amount of tightly curled brown hair. “You are awake! I told you she’d be awake.”

“Put the tray down, Teeny,” the other said. “Mary Jingo, I’m Corb and this is Teeny. We just wanted to stop in and make sure you were okay.”

… “Hello?” she said, quietly, stepping away from the window and standing across from them, also not sure what to do next. “It’s very nice to meet you.”

“Oh goodness!” Teeny said, suddenly, a smile spreading across her pale face and rosy cheeks. It was so bright that it broke all the tension in the air with a laugh. “We brought you food, Mary Jingo. We should eat.”

Mary welcomed the suggestion and followed Teeny to the table. Corb stood in the middle of the room.

“Mary Jingo,” she said, turning in a small circle, with her arms outstretched. “What’s your favorite flower?”

“I don’t know,” Mary said, staring at the plates of bread and fruit. “I think honey suckles are nice.”

“Wonderful,” Corb answered and began humming under her breath. The room began to change. Mary caught a whiff of honeysuckle as they began to grow down the walls, and the furnishings changed to deep yellows, greens, and browns in order to fit the scheme. Mary’s bedspread was suddenly peppered with honeysuckle flowers all over the fabric. Mary had forgotten all about the bread and watched in disbelief. When Corb finished, the room looked like a different place. She put her arms down, walked to the table and sat down next to Teeny. “There. I hate when these rooms are just white. It’s so impersonal. Sorry that took so long. I’m still getting the hang of channeling.” 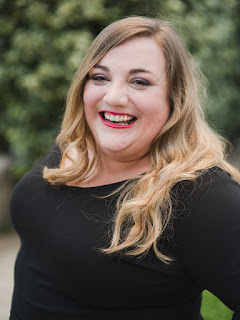 Kelly Byrd is a middle-grade author by choice, a writer by discipline, home-grown chef, and amateur gardener. She lives in Nashville, Tennessee with her husband and two cute-as-buttons rescue pups. The Far From Home series is about growing up, finding your voice, and rescuing the Everything.

Buy the book on Amazon: https://bit.ly/FarFromHome1

Kelly Byrd will be awarding a $25 Amazon or B/N GC to a randomly drawn winner via rafflecopter during the tour.

Thank you for hosting! Mary has made it to the titular city of lights! Hooray!

I really enjoyed the excerpt and look forward to reading the book.

Books Are A Blessing said...