Beyond the Book: I Can't Pick But One?

If one -and only one – of your stories would be adapted for the silver screen, which one would you select? Would you prefer to write the screenplay… or just watch from the sidelines while the studio uses whoever they use for such projects?

Wow, how could an author pick just one of her books for adaptation on the silver screen? When I write a book I always fall in love with my characters. They actually feel like real people to me. The world that I create for them feels like a place that I’d like to be, and they seem like people I’d like to have as friends. Each time I finish a book I feel sort of lost for a little while until I start another project.

However, I find that over time some of my books do stand out in my memory. The first one is A New Leaf, maybe because it was my first book published, and it was a contest winner. I felt that A New Leaf could have been written about people in my own community, which I thought gave it a very realistic vibe.

My second choice would be A New Dream. Even now I still love my characters and occasionally enjoy rereading the book.

Rest Thy Head would be a great choice too. I think it would be easy to adapt this one to the silver screen. The characters are likable, and the setting is lovely.

But I don’t think I’d choose either one of those books. I think I’d choose Blue 52. I love that book more than any other that I’ve written. There isn’t anything about Blue 52 that I’d change. I don’t have many Amazon reviews for it, but each one is a five star review with adjectives like gripping, extraordinary, and intriguing. (Okay, I’ll stop praising my own book now. I feel like a grandma showing pictures of her grandchildren to innocent bystanders.) Can you tell that I I really love this one?

Honestly, I’d have a hard time giving control of the project to anyone else. I’d be afraid that the screenplay would leave something out that I wanted left in, or even worse, change something. It would also be nice to pick the actors who’d star in the movie. I have definite ideas about that. BUT, I don’t think I could write a decent screenplay. I’ve heard that it’s a very different style of writing, and I’d hate for my insistence on control to ruin the movie. I would like to have a say in picking the actors, though.

Would Blue 52 make the best movie? Probably A New Dream would be better than any of the ones I mentioned, but if I ever get a chance in real life I’m going with Blue 52. 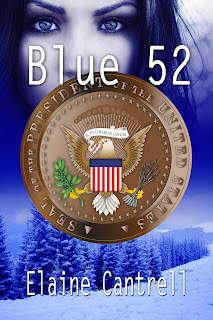 I do think about which of my books would make the best movie and hands down I think it would be Only Scandal Will Do. Lots of action and adventure plus a very conflicted love story. I know something about screenwriting so I would love to write the screenplay and cast the actors. And although I've been a stage director for more than 30 years, I wouldn't even try to direct a movie--a very different animal than a stage play.