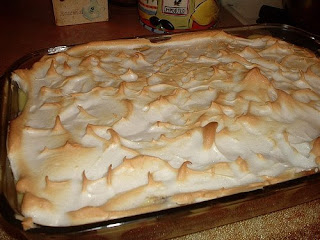 Combine ½ cup sugar, flour and salt in top of double boiler. Stir in 4 egg yolks and milk: blend well. Cook uncovered over boiling water, stirring constantly until thickened. Reduce heat and cook stirring occasionally for 5 minutes. Remove from heat. Add vanilla. Spread small amount on bottom of 1 ½ quart casserole. Cover with layer of Nilla wafers. Top with layer of sliced bananas.
Pour about 1/3 of custard over bananas. Continue to layer wafers, bananas, and custard to make 3 layers of each ending with custard. Beat egg whites until stiff but not dry. Gradually add remaining sugar and beat until stiff peaks form. Spoon on top of pudding covering the entire surface and sealing the edges. Bake at 425 degrees for 5 minutes or until delicately browned.
Posted by Elaine Cantrell at 7:04 AM

That looks beautiful, Elaine! I am passing the recipe on to my husband!
Martha

Hey, Martha, I think he'll like it. We sure do!