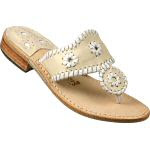 I was only a small child when I got my first pair of flip flops. I remember we had gone to visit my cousin's family, and he had a pair. I wasn't sure I'd like that piece of rubber between my toes, but he promised it felt fine so the following weekend my mother bought me my first pair. They were red, and I loved them. I wore them everywhere. They wore out before too long, but hey, that's not a problem because they were CHEAP. For well under a dollar you could get a brand new pair that was clean and puffy on the bottom.

Of course back then the basic variety was all that could be found in the small town where I grew up-not like today when the selection is almost endless. I have a white pair with a pretty white flower on the top, and I recently bought a black pair decorated with faux turquoise stones. I also have a black patent leather pair with a big silver buckle and zebra skin trim. You outta see how good they look with my black pants and geometric print black and white blouse!

So where did flip flops come from? They've been around forever. Stone age rock paintings show people wearing flip flops, and see the picture on the left? Those are solid gold flip flops found in King Tut's tomb. I don't know how comfortable they'd be, but wow. Solid gold. The Egyptian's also had a hieroglyph for flip flops. It looks like a long oval with an inverted V.

Flip flops came to the United States at the end of World War II when American soldiers brought back Zori sandals as souvenirs of their stay in Japan. They really caught on and morphed into their fifties look after the Korean War. They started to symbolize an informal, casual lifestyle. Of cours it didn't hurt that Jackie Kennedy wore a pair of Jack Rogers Navajo flip flops when she went to Florida. Just so you know, I've ordered me a pair of those. I love them. They're the picture on the right.

Anyway, today you see flip flops everywhere. Models wear them on fashion runways, people wear them to their office on casual Fridays, they still go to the beach, and you can even buy sport flip flops now. Guess how much money Americans spend on flip flops per year? Are you ready? Two billion dollars! For flip flops! Wild isn't it?

Flps flops remind me of my childhood. I live in New Zealand now and they're called jandals in this country - I believe some other countries call them thongs. Thanks for bringing back the pleasant memories.

Sorry. Really.
I hate flip flops.
I wish everyone would stop wearing them. I hate the sound they make. I hate looking at people's feet.
I know.I'm a killjoy.

Sue, isn't jandals a pleasant word? I like that. Chris, you can be a killjoy if you want to. I would say this fad too would pass, but I doubt it since they've been around since the stone age.

I always thought jandals sounded better than flip flops. They even made it into a Christmas song out here - our Christmas is at the beginning of summer so we can spend Christmas Day on the beach.