What Is Diana Up To? 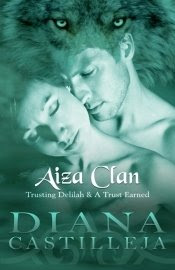 With more than half a dozen ebooks currently to her credit and her first print book released in 2008, Diana Castilleja has kept busy since she started writing professionally in late 2004.

Diana currently resides in central Texas with her husband and son. When not focusing her energy on her family and her writing, she loves to travel and haunt bookstores. She's lived in several states across the south and midwest, as well as traveling to Mexico. With moving every year or changing schools since the fourth grade to her sophomore year, she learned reading was a fast escape. The freedom to read about anything and everything has fueled her adult imagination. She also enjoys romance, horses, and yes, still loves to read. Right now, she's probably attacking her keyboard writing her next book. If she's not, she should be!


Diana also has a new book coming out on June 15 from Tease Publishing, and she's agreed to tell us about it. Here goes.

Roman Aiza is the second born son of the Aiza clan. He also owns and operates a private security company and has an ongoing contract with one of Florida's most influential residents. He is patrolling at a party when he encounters a woman who will haunt him. A woman who at their first meeting, manages to walk right out of his hands when he follows her for trespassing. She manages to do this without giving Roman a single reason why she is in the depths of the house he is protecting. When he does finally locate her days later, his goal is to prove that his instincts are wrong. She is not the woman that all of his senses are clamoring for.

Yet when the daughter of Roman's largest and closest account is kidnapped and held for ransom, will they be able to build a trust between them? Or will their own secrets keep them apart?

Selene Aiza is a very compassionate woman by nature, and fiercely protective of those she cares for. A renowned doctor with gentle patient skills, she prefers the wild country of western Oregon and the secluded hospital where she can help the people who truly need her assistance. And in the depths of those wooded wilds she can keep her secrets well hidden.

She is safe until the man she encounters by pure chance becomes the hospital's first choice as co-administrator. Her secrets and her very life fall into jeopardy, and only he can save her. He could also destroy her.


What they've been saying about the Aiza Clan Series:


Trusting Delilah kept my attention from first word to last. This is a story that grabs all the emotions and the senses.
Judith Rochelle, Author of Cutter's Law and Redemption.


Available in Print at Barnes & Nobles and other retail outlet stores. Also available for purchase online.

Good luck with the book, Diana. Hope you have a bestseller on your hands.
Posted by Elaine Cantrell at 8:58 AM

Thanks Elaine, for letting me invade for a bit. No worries on the bio. If anyone posts any questions, I'll stop back by to answer them. :)

Hi Diana,
I didn't know you wrote under two name. Good luck on your upcoming release. The 15th will be here before you know it.
Linda
www.lindalaroque.com

Thanks for stopping by Linda!