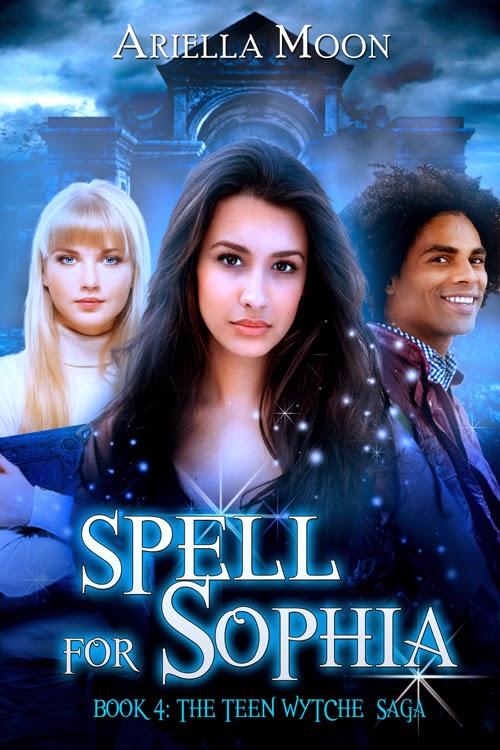 Spell For Sophia By Ariella Moon (The Teen Wytche Saga #4)

Sometimes the worst scars are the ones you cannot see.

Blurb
Sophia Perez-Hidalgo’s survival depends upon her mastering magic and the supernatural before her lawless parents and their vengeful boss catch up to her. How far must she flee to escape them forever? Sophia runs until she’s out of stolen money, then…Fate delivers her into the arms of Louisiana teen Shiloh Breaux Martine, and his grand-mère, a voodoo priestess living deep in the bayou.

Breaux knows Sophia is trouble — but he’ll travel through time, battle zombies, and risk his bright future to protect her. While Ainslie, best friend extraordinaire, will jeopardize her sanity to find and aid Sophia. When friendship, magic, and love are not enough, Sophia will have to save herself. But first, she must believe she’s worth saving.

A wave of magic circled outward from my left eye as though a seeing stone had been dropped into the Lake of Knowledge. Nausea roiled my stomach.
"Soph?" Breaux clutched my forearm.
I opened my eyes and the violet light extinguished. My palms rested on my thighs. At some point we must have dropped the bandana, because it lay at our feet like a fallen surrender flag, all color and blood magically bleached from it.
"You okay?" His words warped as if they had swum through deep water to reach me. He swept up the bandana and stuffed it into his pocket. As he shifted, his leg pressed against mine. My awareness telescoped to the thin layers of denim separating our skin. He clasped my hand between his and rubbed, flooding me with warmth, grounding me.
The eerie chirps, trills, and whistles resumed. The feeling of being watched crept into my consciousness and shuddered down my spine. Breaux must have felt it too. He released my hand, scooped up the nearest oar, and clutched it like a baseball bat.
"Um…Sophia?" Worry tinged Breaux's voice as he rose to his feet.
I lifted my chin. The pain over my right eye resumed stabbing. I blinked several times to clear the wobbly vision in my left eye, and a fresh wave of nausea crashed over me. An elongated white light shimmered in my peripheral vision. Seizing the other oar, I stood and faced it. The white light glittered and assembled into a shaky form. "Mam'zelle?"
"Grand-mère?"
We lowered the oars to our waists. Though Mam'zelle's features were no longer distinguishable, I recognized her essence. In my mind's eye she shook her head and wagged her finger at me. Child, didn't I teach you anyt’ing? What did you forget?
Panic seized me. "We forgot something. Something important."
Breaux's eyes rolled upward, then back to center. "We purposely skipped some steps because we didn't have time—"
Mam'zelle vanished. My arms tingled. A luminous red mist gathered along the bayou's edge. Corpses — men, women, and children — rose from the blood-colored vapors.
Breaux hefted the oar. "Do you see them?"
"The zombie army?" The boat rocked as we assumed a back-to-back stance and raised the oars to chest level. "Why are they here?" My voice shook.
Breaux shifted his stance. The boat groaned and creaked. "Maybe a portal opened—"
A gasp fled my throat. "I forgot to ask Papa Legba to close the gate!"
"Soph!"
I dropped my oar and dove for my backpack. The zipper slipped from my sweaty grasp. I found it again and pinched the tab between my thumb and forefinger. Nylon teeth unthreaded with a ripping sound. I shoved my hand into the pack and dug through its contents. "Where's the pencil?"
Breaux fingered the top of his ear and his oar clattered to the floor of the boat. Along the bayou banks, a contingent of undead rocked from side to side. Breaux reached into his front jeans pocket, withdrew the pencil stub, and thrust it into my hand. "Hurry."
The lantern illuminated the edge of the seat bench. Between the migraine and the magic, I had difficulty focusing. Working half-blind in the meager light, I sketched a crossroad onto the wood.
"Will it work?" Breaux asked. "Using a different crossroad?"
"We'll find out."
Breaux swore under his breath and cast a nervous glance at the shore. His eyes widened and he retrieved his oar — sure signs the undead had grown in number or were on the move. Something tumbled down the slight incline and plopped into the shallow water.
"Any time now." Breaux's fingers twitched against the oar.

Author Bio
Ariella Moon is the author of the Teen Wytche Saga, a sweet Young Adult paranormal series. Ariella writes about magic, friendship, high school, secrets, and love in Spell Check, Spell Struck, Spell Fire, and Spell For Sophia from Astraea Press.
Ariella spent her childhood searching for a magical wardrobe that would transport her to Narnia. Extreme math anxiety, and taller students who mistook her for a leaning post, marred her youth. Despite these horrors, she graduated summa cum laude from the University of California at Davis. Ariella is a Reiki Master, author, and shaman. She lives a nearly normal life with her extraordinary daughter, two shamelessly spoiled dogs, and an enormous dragon. 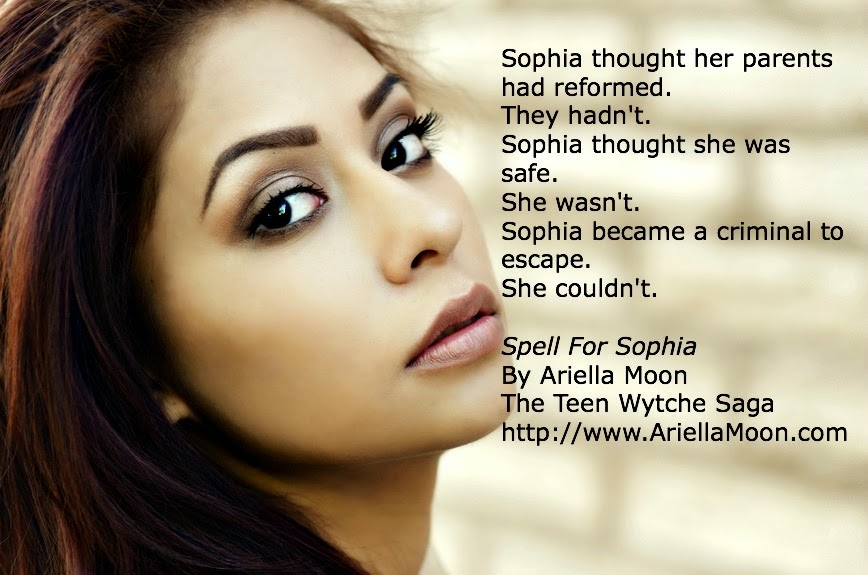