The Mermaid and the Unicorns 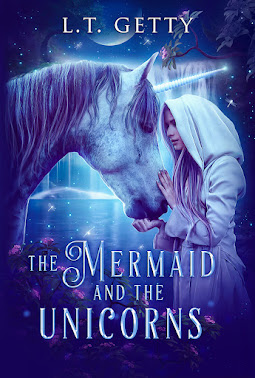 The Mermaid and the Unicorns

Daphne’s a typical mermaid, and at least according to her, that’s a problem. She’s courageous and has a beautiful singing voice, but lacks the power of an elemental, the ability to command water with the sound of her voice. Jealous of her best friend, she makes a deal with a sea-witch, only to be betrayed, in place of her beautiful tail and flukes Daphne’s left beached with a pair of human legs. The spell keeping Daphne looking human will become permanent, unless Daphne can hunt down and bring the scheming Lorelei a unicorn horn before the next full moon.

Unable to reach her friends and family for help, Daphne doesn’t know how to walk, much less where to find a unicorn or how to catch one. Even if she’s successful, Daphne’s still not sure if she can trust Lorelei and her pint-sized kraken to keep their end of the bargain and let her return to the sea.

"You'll see lots as you travel from place to place," Daphne told the small dolphin. "Come, your mother won't forgive me if I let you roam from the pod."

Why hurry? Echor asked as he swam, spinning around different plants and sponges that grew along the rocks, before focusing in on a vibrant snail. It was not a very old reef, though it was well inhabited by many vividly-colored, small fish. The young dolphin seemed to take pleasure in disturbing them and watching them scurry into their small hiding crevices and among the anemones. You're so lucky that you get to stay in your town all the time. This part of the sea is so beautiful!

"I think it would be neat to see so much of the ocean," Daphne said, thinking of her small town of Thranda. Unlike the dolphins, who often travelled long distances in a single day, most merfolk lived in towns unless they left their communities to hunt or travel to another community. She had known members of his family since she was a little mermaid, and only got to see them a few times a year when they passed through her home to feed in a nearby bay. She heard a series of warnings behind her—the other dolphins had detected something with their echolocation. Unless it was something exceptionally large, they should have been safe within the pod, but Echor was very young. "Echor, let's return to your family." The young dolphin had wandered off while Daphne had turned her head, chasing a seal that had left her bob, trying to swim away from Echor.

"Echor!" Daphne called, swimming after him. She caught up to him, then looked over her shoulder as she heard a familiar sound. An orca! Daphne suppressed a shudder. It was large, but far enough away for her to find a hiding space. Still, killer whales almost always travelled in groups. The killer whale dove when he spotted her. She knew the others would want to help, but they were no match for an orca. He swam quickly towards her and Echor. Daphne knew she would be hard pressed to out-swim the large creature.

Hide! the orca told her.

Daphne then saw the immense shadow and wooden keel of a ship following the orca. The killer whale dove deep, though the water was too clear and shallow to truly hide his massive form. A harpoon followed him, missed, and was quickly pulled back to the surface by a rope. Another harpoon plunged into the water, and then another. The rough waters churned green and grey in the ship's wake, and Echor's warning chatter only told her that there was another human vessel. It came from Daphne's left, and it dragged a net behind it.

I went to Winnipeg’s Keycon for an event to pitch a book to they said “Three Publishers” but it was really an editor and a publisher for a short story magazine and Champagne Books. I met Ellen, the publisher at the time for Champagne Books, and pitched Tower of Obsidian. I also told her I wanted to ask the other editors some questions about names because for whatever reason, I decided to use Ireland as where my story started and Gaelic names aren’t confusing at all. (The short of it is that English wasn’t standardized and my main heroine’s name is Aoife, pronounced E-fa, and I wanted to know how I could cheat and if I should cheat. I have since learned to run away from these stunningly beautiful names).

I fixed a few things and sent her the book, and a few months later I had a contract. I started working as a paramedic, and I was so broke and down I decided to focus on being the best medic I could be, so I did keep writing but I didn’t focus on publishing on putting my work out there up until a few years ago. I saw Ellen at another conference, and pitched Dreams of Mariposa, and the editor I hired to help me work on Witchslayer’s Scion mentioned it, so I sent that in as well. Champagne accepted both titles, and now I’m more focused on editing the stuff I have written as well as producing more material.

I can’t pick a single favorite. If you want a recommendation, for Young Adult, try Spirit Sight and Water Site by Marie Powell. Historical fantasy set in Wales during the reign of Edward Longshanks. 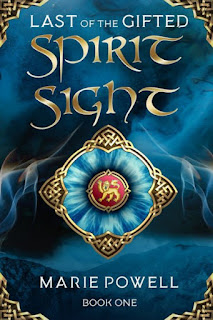 My favorite novel is Till We Have Faces by CS Lewis. I read a lot of modernism in University and read an awful lot of George Orwell’s Nonfiction, and likewise I started to read a lot of Lewis’ writings that aren’t as well known, although I think a lot of his Christian works are rather well known too. 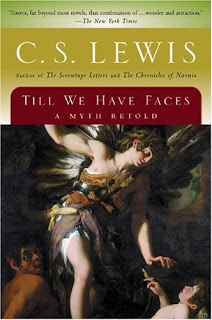 I think the best part of being an author is making sense of something from my mind and trying to make a story out of it, and seeing how creative it can be. I also like it when people tell me about how they were really touched by this story or that story, so I’m hoping one day I can be that for someone.

The worst is the elitism and frustration in dealing with other people. I totally understand that not everything I write is for everyone – but I don’t like it when I have to deal with people belittling other people or attacking them. This is not saying I don’t like criticism – I think it’s healthy and a normal thing for people to talk about what they just read or listened to. My problem is when you’re belittling the person making the art, not offering constructive criticism on how to fix the art. Does all criticism have to be constructive? Absolutely not; just there’s a difference between, “I didn’t like your cake” and “I didn’t like your cake, I think it was a little dry”. In the former, I can’t tell if you didn’t like it because it tasted like sawdust or you don’t like cake.

Besides working on edits on the second book in the Rogue Healer series, as per my niece’s request I am working on a not-quite sequel to The Mermaids and the Unicorns called, “The Puppeteers” and that title is too generic and will change. In The Mermaid and the Unicorns, when Esperanza gets to Taralee, she has her hopes dashed at the academy, mostly because she isn’t ‘their sort’ and she falls prey to someone who doesn’t have her best interests at heart. Girl literally gets turned into a puppet, which is both metaphorical and literal and I was worried that the scene was too scary for 10 year olds and I was going to cut it if my niece or sister objected to it. It was my niece’s favorite part of the book, so not only did it stay, she suggested I do something more with the puppeteers. I pitched a few ideas to her, and she is basically my creative consult. She’s also almost fifteen now as opposed to eight, so the story I’m working on is more geared towards Young Adult as opposed to Middle Grade, but I’m writing it so it’s not inappropriate if a ten year old who reads above their level finds it.

Puppeteers starts before The Mermaid and the Unicorns ends. The wyvern that confronted Daphne comes off the mountain and starts stealing sheep from a nearby farming community, so the locals gather to hunt the beast. The lead hunter has three teenage children (our main characters), who he leaves behind with his wife to protect the village, and a woman from Taralee wanders into town while a reasonable chunk of the adult population is away or preoccupied keeping the community safe.

What harm could the stranger be? Her dress is grass-stained and she’s claiming she’s been beset by bandits, all she has left are a handful of theatre masks, puppet crossbars and strings…

L.T. Getty is a rural paramedic from Manitoba. She enjoys writing science fiction and fantasy and generally being creative.

L.T. Getty will be awarding a $20 Amazon/BN GC to a randomly drawn winner via rafflecopter during the tour.