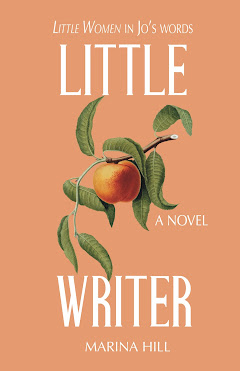 A retelling of the classic coming-of-age story Little Women through the intimate lens of Jo March.

It's 1862 and fifteen-year-old Jo March would rather be fighting in the war, like her papa, than improving her knitting skills on the home front. But societal conventions for the "gentle" woman-and her steadfast adoration for her three sisters-force Jo to stay behind and support the family, all the while rolling her eyes at Aunt March and daydreaming of becoming a famous author.

At home, love abounds in the March girls' lives in the form of family, friendship, patriotism, religion, and-to Jo's chagrin-romance. As each sister navigates their ascent into adulthood, Jo unwittingly ventures down a path of self-realization, using her gift of written prose to craft her voice, and thus, her truth. Perhaps, just maybe, she can strike balance between the freedom of independence and the warmth of partnership...

In this visionary adaptation, Little Writer tells the March sisters' timeless journey to womanhood with a multiracial cast of characters, reimagining history to include diverse communities without elaboration.

When spring rolls around, my sisters and I love to stay outside.

One blossoming afternoon, while I’m in the coop to feed the chickens, I spot Laurie, Beth, and Amy around the redbud tree. Laurie latches onto a branch to shake the tree loose of any lingering magenta petals. Flowers begin raining on Beth and Amy, who lock hands and spin together. Their skirts fly about them and I smile at their girlish laughter.

Once I return to feeding the animals, Laurie appears behind me. “What d’you have there?”

“Teddy! Come in. I want you to meet my chicken, Aunt Cockle-top.” I point to her and, though Laurie enters the coop, he says far from the roaming animals.

“Please keep that from me,” he says, shaking some magenta flower petals from his curls as he skirts away.

“Don’t be afraid,” I exclaim, cleaning my hands on my linen apron before scooping up Aunt Cockle-top. She flaps her wings.

“She’s just a chicken. Face your fears!” I haul Aunt Cockle-top into the air toward him.

He yelps and loses his footing without trying to catch her. My chicken falls on top of him and he screeches, “She bit me!” to send me into a deep laughing fit.

“Josephine!” Marmee’s scolding voice startles me. My laughter is slow to dissipate as she brings a whimpering Laurie inside.

Yes! It has always been a dream of mine. Taking the world in my head and sharing it with others is such a wild experience. Everyone interprets stories differently and it’s interesting to see the way readers react to your own.

I never planned on the indie publishing route. For a long time, I’ve been on the traditional track. And then I realized I can do whatever I want. Traditional publishing is full of gatekeepers and it’s certainly a goal of mine to break through, but I don’t have to wait for my first breakthrough to become an author. Realizing that was extremely liberating. I started taking my career into my own hands. There are plenty, plenty, plenty of successful self-published authors and there are many traditionally published authors who started as indies! I wanted to write something comfortable. Something that makes my heart sing with warmth and coziness—and Little Women gave me such a feeling. I love to dissect stories and understand them from different points of view. One day, I threw out on Instagram the possibility of a book series in each March sister perspectives, and multiple people responded with support and thus the idea was born!

3. Besides yourself, who is your favorite author in the genre you write in?

4. What's the best part of being an author? The worst?

5. What are you working on now?

Right now, I’m drafting a story about a girl who loves dragons! In her world, these beautiful creatures were thought to have been extinct and it is her duty to understand why they’re here and to convince the world that they’re not the monster they’ve been taught to fear.

Marina Hill is a writer with a keen interest in all things undiscovered. She grew up in the New Jersey side of Philadelphia, watching Eagles games and roughhousing with her plethora of older brothers. She attended Baruch College in NYC and has over a dozen publications of her other works. If she isn’t daydreaming about her next story, she’s studying history or yearning to dash into the forest, build a farm, and never look back. Marina never lives in one spot for too long and loves to travel with her dog.

Marina Hill will be awarding a $15 Amazon/BN GC to a randomly drawn winner via rafflecopter during the tour.