One Interesting Woman: The Riddle of Prague 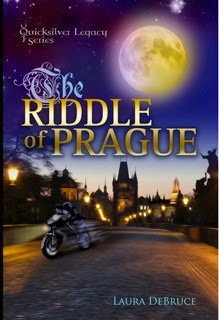 Welcome to my blog. Laura DeBruce is my guest today. I asked her to tell us ten interesting things about herself, and boy did she deliver. This is one exciting lady.

10  things most people don't know about me.


My father worked for the U.S. Embassy and we moved every couple of years. Sometimes it was confusing. In 2nd grade in Ethiopia, there was an assembly on the first day of school where everyone had to stand when their country of origin was named. I stood when they called out India because we had lived there for five years, most of my life. My big sister was next to me and she quickly pulled me down and told me I was American.


Instead I named my main character after her, except Hana Silna is Czech so her name is spelled with just one ‘n’ and no ‘h’ at the end. My mother was named after her grandmother and is part of a long line of Hannahs that date back to the 1500s, maybe even earlier than that. Because women have traditionally lost their last name in marriage, I liked the idea of carrying forward the name Hannah.


In the early Prague days, a group of us spent a weekend in a little town in Bohemia and thought it would be fun to play a game where we got to know each other better.  In “Who Am I?” everyone writes an obscure fact about him or herself on a slip of paper like, for example, “I ruined his childhood” or “My favorite place in the world is a rock in Nevada.” The papers are collected, distributed and read out loud one by one. You have to guess who said what. It’s an entertaining game and no matter how often we play we still discover new facts about each other. The hardest part about the game is keeping the grid of answers and who guessed what.


My friend Lisa and I flew over on People’s Express airline and took a train from London (plus the ferry to cross the English Channel) across Western Europe and right into Warsaw.


I liked the fact that Jane Dee is the name of an actual person who played a role during the days of alchemy and the reign of Rudolf II. She was the wife of John Dee and Edward Kelley, the alchemist who wrote the riddle in The Riddle of Prague, seems to have been in love with her. I also liked that it’s part of my own name – Laura “Jane De”Bruce.  But in the end it seemed more complicated to write under a pen name so I went with my own.

6.            I worked as the local morning producer for the NPR radio station at the University of Florida.


I had to wake up at 5 AM but I loved being one of the first people on campus, making coffee, reading the newsfeed from the AP wire and writing the news.


7.            The Riddle of Prague is based on a manuscript that featured Hana Silna as a grown-up lawyer returning to Prague.


David Bolton and Ben Williams (Alex’s father) were the romantic interests. Two of the most enthusiastic early readers were teenagers and so I decided to gear the story towards young adults and those of us not so young adults who love YA fiction.


My mother introduced me to the series when there were already a few written and so I had the pleasure of devouring the first two or three in one sitting. I was in line outside of Barnes & Noble waiting for the doors to open the day the seventh book came out.


9.            I was in Dubrovnik, Croatia (formerly known as Ragusa) during a hailstorm in the summer time, which inspired the Legend of Valentina.


I spent my last two years of high school in Egypt. We had a great deal of freedom to roam around Cairo and could spend our weekends at the Khan el-Khalili bazaar or riding horses in the desert.
Laura, thank you so much for sharing with us, and now let's find out more about Laura's book.
The Riddle of Prague
by Laura DeBruce
~~~~~~~~~~~~~
BLURB:
When 18-year-old Hana Silna travels to Prague to reclaim her family’s home, she discovers a riddle that may lead to a long-last flask.
The contents of that flask could change the fate of the world. When a ruthless enemy kidnaps her family Hana has to find the flask to rescue them. On her quest she meets a mysterious man with a penchant for poetry, a Gypsy girl with a haunting past, and Alex, an all-American boy who’s trying to save his sister from a crippling disease.   It’s hard to trust anyone when the stakes are this high — especially when surrounded by experts in deception.
There’s only one flask, and Hana desperately needs to find it.
Excerpt:


My mother says when we face our fears, we tap into a reservoir of courage. I’m not so sure. I’m strapped to this seat like a captured beast, and all I feel is panic. The airplane screams down the runway and thrusts its 800,000 pounds of steel into the sky. We’re taking off in the middle of a thunderstorm. My seatmate, immersed in a book, seems oblivious to the danger.

He’s got curly, blond hair that’s a little on the long side and one of those perfectly sculpted noses, and he’s wearing jeans and a batik-patterned shirt. Early twenties, I’m guessing. Not much older than me. The airplane gives a sickening lunge, and I tug the seatbelt tighter. My seatmate glances over, a bit eagerly, with piercing blue eyes.

“You all right there?” he asks with a crisp, European accent of some kind.

“This is the amazing part.” He gestures out the window, twirling his hand as if he’s conducting the storm outside. “Look!”

“I’d rather not.” The plane shakes, and I grab the armrests.

I’m only on this flight because my mother has inherited a house in Prague. Actually she’s reclaiming a house—the one where she grew up. The one the Communists took from her family when they seized all private property. My mom and dad had to escape when the Soviets invaded Prague in 1968. Now the Iron Curtain has lifted, and the people who left can finally return without being thrown into jail. Unfortunately for my mother, now means surgery and doctors. She’s at a hospital and can barely walk down the hallway, much less haul herself onto a plane. This didn’t matter to the bureaucrats in charge of the restitution of property. If the transfer of the house doesn’t happen immediately, they say it might not happen at all. That’s why my mother is sending me, her only child, in her place. That’s why I’m on this airplane instead of at the hospital at her side, where I should be. 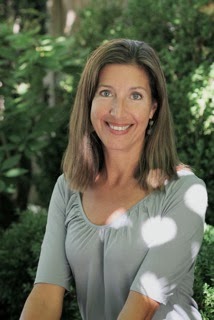 AUTHOR Bio and Links:
Laura DeBruce is a documentary filmmaker and writer. She grew up traveling all over the world thanks to her father’s work with the U.S. Embassy. She and her husband spent twelve years living in Europe including Prague, Paris, Amsterdam and London where she found inspiration to write The Quicksilver Legacy Series. In Prague she worked as a lawyer for the first private nationwide television station in the former Communist bloc.  It was there that she fell in love with the ancient city of Prague and its legends.
She lives in the Washington, DC area with her husband and son and an unruly Golden Retriever.
Website with blog and trailer:  http://theriddleofprague.com/
Amazon.com:  http://www.amazon.com/Riddle-Prague-QuickSilver-Legacy-ebook/dp/B00FFBNUVA/ref=sr_1_1?ie=UTF8&qid=1386523998&sr=8-1&keywords=riddle+prague
Facebook: https://www.facebook.com/TheRiddleofPrague
Twitter:   https://twitter.com/LauraDeBruce

Laura, thank you so much for coming. Readers, Laura is giving away a $50 Amazon/B&N gift certificate to a random commenter. Enter using this rafflecopter link: http://www.rafflecopter.com/rafl/display/28e43468/

To follow Laura's schedule, go to http://goddessfishpromotions.blogspot.com/2013/12/virtual-book-tour-riddle-of-prague-by.html
Posted by Elaine Cantrell at 12:30 AM

Thank you so much for hosting The Riddle of Prague!

I love the 10 things. That was funny you stood up when India was called out. lol

I'm still gushing that you graduated from high school at the feet of the Giza pyramids. That is amazing! Thanks for hosting! :)

This has been a most awesome blog tour! I enjoyed the reviews, the great exerpts, the book trailer and especially the fabulous artwork you showcased. With the staggering amount of research put into this book as well a your own personal life experiences I have no doubt this is a best seller. Thanks for sharing and best of luck.