Saturday Sample: Her Kind of Man 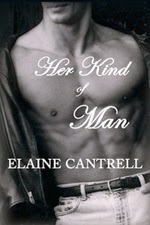 Her Kind of Man is a publisher's bestseller, and is on sale for only .99 at http://www.lachesispublishing.com

Kara laid the kitten beside its mama, but before she could get to her feet, Ross gave her a little push and toppled her over into the hay. A second later he stretched out beside her.

"What's your hurry?" he muttered. He closed his eyes and teased Kara's lips with his own. "Hold me."

Kara didn't mind if she did because Ross felt good in her arms. The fragrant, warm hay that kept her safe from curious, prying eyes gave her a sense of security. Her arms slipped around Ross who kissed her again.

Punch-drunk from the destruction of so many hopes and dreams, kissing Ross still sent little shivers up and down Kara's spine. Her body felt warm, pliant, and alive. She made no protest when Ross grabbed her bottom to pull her against him.

Blurb:
Is it possible she’s finally found her kind of man?

Ross Williams has been in love with Kara Cochrane since they were kids, so when Kara’s fiancé Brandon Miles cheats on her and calls off their wedding—Ross steps in to rescue the damsel in distress.

A heartbroken Kara just wants to get on with her life and hunky Ross provides her with a definite distraction—that is until she starts falling for him. Big time.

But a devastating family secret threatens to destroy everything that Kara holds dear—including her relationship with Ross.
Posted by Elaine Cantrell at 9:29 PM